It’s not just electronics and other product manufacturing that 3D printers promise to revolutionise. The machines might one day replace all the appliances in your kitchen when it comes to making dinner, or more importantly, making sweets.

A German candy-maker called Katjes has created the world’s first 3D printer that extrudes soft gummy sweets instead of melted plastic. You’re probably already familiar with gummy bears, gummy worms, and even gummy cola bottles, but soon anything you can imagine (and model in 3D) could be turned into a gummy sweet.

The 3D printer, affectionately known as The Magic Candy Factory, is controlled via an iPad that lets customers choose one of a handful of different shapes in seven different colours and 10 different flavours. The 3D printer is currently set up in a candy store in Berlin, and for just shy of four quid kids can order a custom treat (lactose, gluten, and gelatin-free) that takes about 10 minutes for the machine to make. 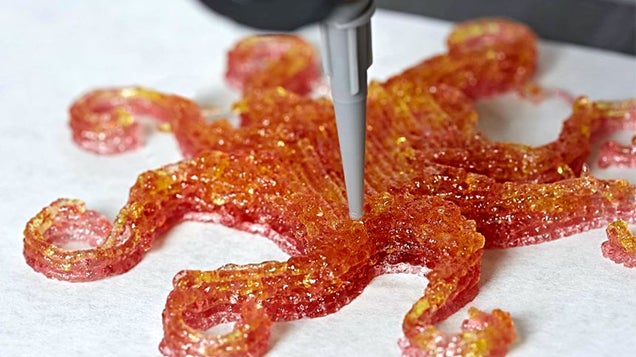 Unlike the simple shapes like tiny bears and worms that are plopped out of moulds, these gummy candies are remarkably intricate and detailed. You’d almost be afraid to eat them, except for the fact that just one of them could get you three or four bags of gummy bears, so you might as well snack away and enjoy them to their fullest.