Samsung's New "Serif" TV Is More About Design Than Technology

There’s no other company that likes to muck around with form factor than Samsung. The Korean company applies strange curves, slopes, and even folds on lots of its gadgets, but for its latest television, it teamed up with one of the world’s best furniture designers to create Serif, a TV that’s more posh than the number of pixels.

Samsung’s exploration into TVs that are more than just flat (or sometimes curved) panels of tech in your living has been met with mixed results in the past but Serif is an undeniable step in the “must have” direction. For one, it’s designed by Ronan and Erwan Bouroullec, who are world-renown for furniture design. Second, it simply looks great. Its silhouette looks like a capital, serif “I” (hence the name), and a woven cloth cover in the back makes hiding unsightly cords easy.

This television is Samsung’s second attempt at smashing together top-grade industrial design and technology after making the Yves Behar TV set from 2014 (which was a bit of a letdown). Serif is much more tame, built for someone who wants a great-looking TV and not necessarily the one packed with the most HDMI ports and pixels.

Serif comes in white, dark blue, and red and ranges from 24, 32, and 40-inches—so pretty tiny—and also four support legs so you can place anywhere in your home. Strangely enough, I could find no information regarding the actual panel in the television, but I’d bet on an ultra HD panel. Of course, there’s also no price so it’s anyone’s guess.

As for other features, a look at some pictures over at the designer’s image gallery shows off a remote design with a button dedicated to Samsung’s Smart TV technology. Whether that’s an actual good thing or not, is probably a personal, soul-searching question. The designers also developed a start screen called “curtain mode,” which is a less aggressive way for your TV to turn on instead of just flashing some brand logo.

My favourite part of the TV? The added shelf space provided by the flat top of the serif “I.” So, you can now finely display those Star Wars action figures or just have another shelf for your cat to conquer. Like so: 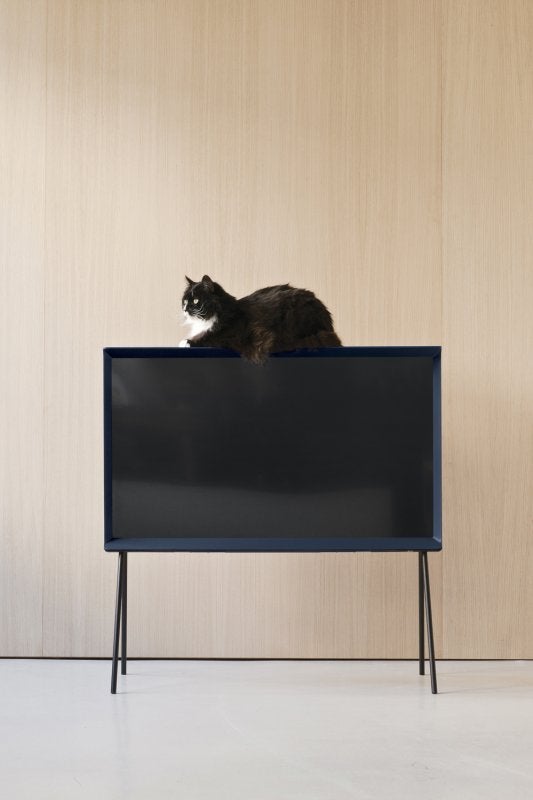 Now, for some bad news. The Serif is available from November 2nd here in the UK, plus France, Sweden, and Denmark, so you’ll have to some import sleuthing to get one of these guys in your living room. But from the looks of Serif, it just might be worth it.