The Hero+ is GoPro's New Entry-Level Camera, Now With Wi-Fi

GoPro’s got itself quite a stable of little cameras these days. We already had (from high end to low end) the Hero4 Black, Hero4 Silver, Hero4 Session, Hero+LCD, and the straight up Hero. Now, squeezing in between those bottom two, comes the Hero+. It’s a $200 (UK price £170) version of the Hero, but it has Wi-Fi and has significantly upgraded shooting modes.

Examples? The Hero tops out at 1080p30. The Hero+ Goes to 1080p60. It also has options for SuperView — a mode that crams more into the top and bottom of your shot — which is nice for board sports and POV video. It also shoots 8MP stills instead of 5MP, and it has an auto low-light mode. The Wi-Fi means you can frame shots and transfer footage directly from your phone. I’d call these advantages worth the step-up fee from the Hero, which currently hovers between £90 and £100 online.

Externally the Hero+ looks basically the same as the Hero, with the camera built directly into its waterproof housing (waterproof to 40 metres). It should be compatible with any existing GoPro mounts and accessories, too. But again, as with the Hero, there’s no removable battery, which could be a big problem on longer shoots. Something to consider. 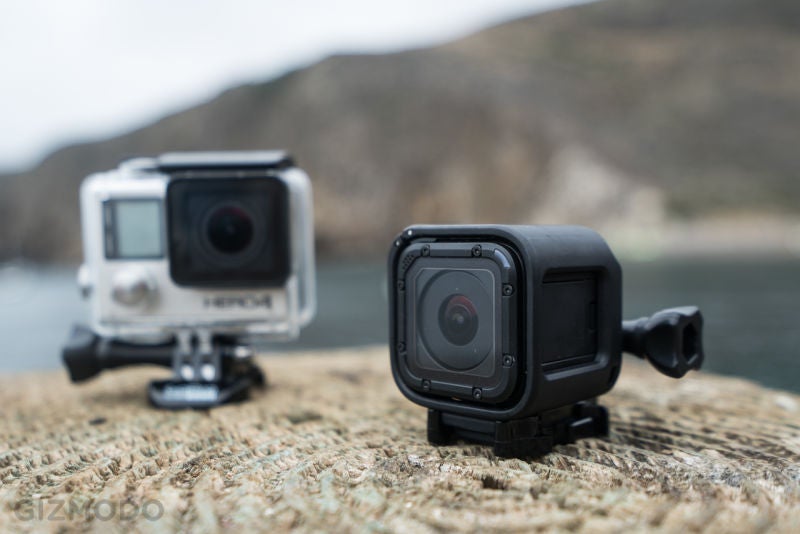 We were hoping we’d see the Hero4+ unveiled. It’s been almost exactly one year since the Hero4 was unveiled and new flagships are always nice. I was told that the Hero4 Session took the flagship spot, this year, though. Guess we’ll have to see what 2016 brings. In the meantime, the Hero+ will be available from October 4th. [GoPro]