About That "Orgasmic" Mushroom: It Probably Doesn't Exist

There’s a rumour flying around the internet about a Hawaiian mushroom whose scent gives women orgasms. I’m sorry to disappoint, but there’s absolutely no credible evidence to support that claim.

Yes, I know that some of the details come from an article in a scientific journal, but the paper people are linking to isn’t really a paper. It’s the abstract for a presentation at a medicinal mushrooms conference from 2001. And abstracts in this context are not peer-reviewed. That’s OK for a talk, where researchers are sharing preliminary data with other scientists for feedback, but it means every bit of data presented in the abstract should be taken with a grain of salt.

And this particular abstract is unusually data-free. The authors say that the mushroom species (claimed to be closely related to the stinkhorn fungus in the photo above) with the ability to arouse women is new to science, but they don’t describe or name it. They say they’ve analysed its chemistry, but provide no details. They say they’ve run a test of the physiological effects of the scent on humans, but don’t explain their methods, or the number of test subjects they used, or the variables they measured, or their controls. Frankly, if one of my students handed me this abstract, I’d cover it in red ink and send it back for a thorough rewrite.

And for 14 years, there hasn’t been another word published in the scientific literature on this particular subject. No physiology, no chemistry, not even a formal species description for the mushroom. When contacted, lead author John C. Holliday (now head of research at Aloha Medicinals), declined to provide more detail.

This is a research project in the works, with the intention to bring this on the market as a drug. So we really do not want to put anything more out about this, we are hoping it just dies down and goes away.

But let’s see what we can glean from the information we have at hand.

A Habitat That Doesn’t Make Sense

The abstract claims the mushroom in question is a new species in the genus Dictyphora living on recent lava flows on Hawaii. And during a talk at the 2014 Telluride Mushroom Fest, Holliday described the habitat as “hot, black, rocky lava flows right above the ocean in the saltwater surf zone.” Here’s what that habitat looks like. 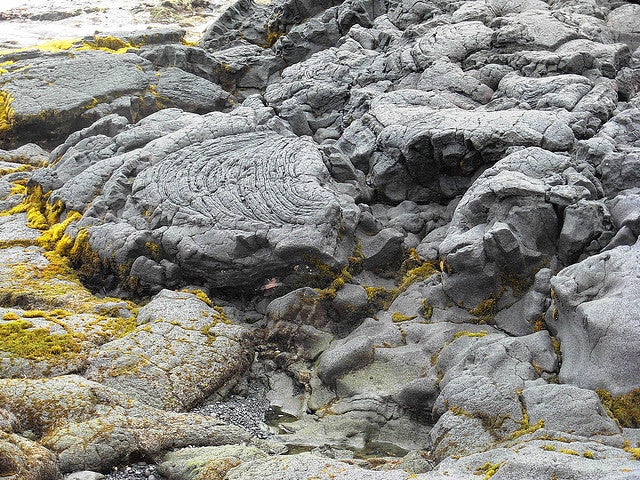 According to University of Hawaii mycologist Nicole Hynson, that’s an extremely unusual environment to find this type of mushroom. “There are fungi that inhabit recent lava flows, but I’ve never seen a stinkhorn on that barren substrate—they feed off of dead organic matter, and there just isn’t much of that on those rocks.”

The abstract claims that in a ‘smell test’ where volunteers were asked to sniff the mushroom, the smell induced orgasm in nearly half of the women tested. The abstract doesn’t reveal any details about the experiment’s design, but Ben Soctrin added more in a 2002 edition of the Bulletin of the Puget Sound Mycological Society, a hobbyist newsletter that is also not subject to peer-review:

To investigate the reputed effects, Holliday asked randomly chosen subjects, both male and female, to sniff a fresh specimen. Of the 20 males, all found the smell repulsive. No physiological responses were noted in any of them. Women, however, found the smell pleasant. In a controlled clinical trial involving 16 women, six had orgasms while smelling the fruiting body of the fungus. The other 10 experienced physiological changes, most notably increased heart rates. These 10 received smaller doses, so their responses may have been dose related.

There are so many problems here. A study size that’s statistically underpowered, no controls with placebo, no standard dosing, no data on the extent of the purported physiological effects. And notice that there are actually two trials with vastly different results: in one, randomly selected women are said to have found the odour ‘pleasant’ with no sign of a massive public orgasm; in the other, half of them are climaxing their brains out. Something simply doesn’t smell right there.

This is the conclusion in the “orgasm mushroom” abstract:

These results suggest that the hormone like compounds present in the volatile portion of the spore mass may have some similarity to human neurotransmitters released during sexual encounters.

No. Just no. The logic here is that (1) the mushroom releases something like a pheromone that (2) happens to plug into the neurobiological system that controls orgasm in humans. That’s a pretty extraordinary claim.

Stinkhorns do release compounds that smell. They’re trying to attract the flies that spread their spores. But they don’t smell like anything a human is going to enjoy. That’s because the flies in question eat faeces and carrion, and that’s what the stinkhorn family emulates. Says Cornell University mycologist Scott LaGreca, “Truffles smell like mammal pheromones, but Dictyophora just smell nasty.”

The idea that the mushroom is also exuding a powerful human-female-specific sexual stimulant, says Hynson, “doesn’t make a whole lot of biological sense based on what we know about this group’s natural history.” And it doesn’t make sense when you think about the worldwide distribution of these fungi, she says. “The [Dictyophora] species that are known to inhabit Hawaii are found elsewhere, so why hasn’t this trait been found before?”

It also doesn’t make a lot of sense from the human end of the equation. Many mammals do have a structure that detects pheromones–the vomeronasal organ–but humans aren’t one of them. Which means any pheromones we can detect have to be routed through regular olfactory neural pathways, and so far, there’s no evidence that those neurons are directly involved in orgasm.

In short, the available evidence all points to the same conclusion. This mushroom study stinks.