Cosmic Rays Could Help Unlock the Secrets of the Pyramids

There’s a long and colourful history of people trying to unlock the secret of how the Egyptian pyramids were built — and possibly find hidden rooms and corridors, for good measure. And now, a new international project aims to peer through the stone walls of these ancient structures, using cosmic rays.

Actually, the ScanPyramids Project will use several different cutting-edge techniques to non-invasively image pyramids in Giza and Dahshur: thermal imaging, drone-mounted scanners, and a technique called muon tomography. The project will kick off November 2016 and will run for a full year, with the support of the Egyptian Ministry of Antiquities.

Muon tomography works a bit like X-ray imaging or ground-penetrating radar, except the technique uses muon cosmic rays rather than X-rays or radio waves. High-energy cosmic rays can penetrate more deeply through very dense substances, such as the stone used to build the pyramids. 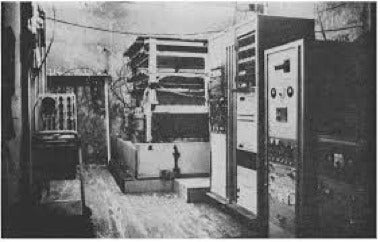 This isn’t the first time cosmic rays of the muon variety have been adapted to archaeological purposes. Back in the 1950s, an engineer named E.P. George used a muon-based technique to measure an Australian tunnel.

Most famously, the Nobel-prize winning physicist Luiz Alvarez collaborated with Egyptian archaeologists in the 1960s to search for suspected hidden chambers in the Khafre pyramid at Giza. He set up a type of muon detector known as a spark chamber underneath the pyramid, the idea being that a hidden chamber wouldn’t be as dense as the rest of the structure. More muons would get through instead of being blocked and this should show up clearly in the resulting image.

And it worked — as proof of principle, at least. There seemed to be a void in the pyramid’s structure. Unfortunately, no hidden rooms were discovered. But muon tomography has been a popular imaging technique ever since.

Muons are being used to hunt for illegally transported nuclear materials at border crossings, and to monitor active volcanoes, in hopes of detecting when they might erupt. Back in 2008, scientists at the University of Texas, Austin, tried to follow in Alvarez’s footsteps, repurposing old muon detectors to search for possible hidden Mayan ruins in Belize.

And now muon detectors are once again being pressed into service to scan Egyptian pyramids. One contentious issue that will hopefully be resolved is the nature of mysterious spiral structures within the pyramids. Some archaeologists agree with French architect Jean-Pierre Houdin that these are evidence that the structures may have been built from the inside, according to Mehdi Tayoubi, founder of the French arts heritage non-profit HIP and a member of the ScanPyramids Project; others remain sceptical.

“I want the team to be in a humble position, as many people have tried before to work out the mystery of the pyramids,” Tayoubi told Motherboard. “But we’re really excited. If we find something, it’s going to allow us to understand how the pyramids were built — this is one of the greatest mysteries.” [Via Motherboard]

Wohl, C.G. (2007) “Scientist as detective: Luis Alvarez and the pyramid burial chambers, the JFK assassination, and the end of the dinosaurs,” American Journal of Physics 75(11): 968.