Does The International Space Station Have An On-Call Doctor?

By Quora on at

The answer is yes...and no! It all depends on your definition of “on call.”

The ISS Mission Control Center in Houston, Texas has a staff of flight controllers available 24/7, 365 days a year. One of those flight controllers carries the moniker of Flight Surgeon. They serve as the medical eyes and ears for every astronaut on board the ISS (and of course, cosmonauts as well, if needed). But the flight surgeon is 250 miles away, and seated at a computer terminal. Their ability to aid the crew is limited in many aspects.

So, NASA chooses a Crew Medical Officer for each mission, which was one of my responsibilities when I was a member of the ISS Expedition 15 crew and also during my STS-131 mission on Discovery. In that capacity I was able to provide limited support to any on board medical situations and/or emergencies. Fortunately for me, and my Russian crew mate (and commander) Fyodor Yurchikin, our third “space brother” Oleg Kotov, was a trained medical doctor, as in “...turn your head and cough!”

Interesting aspects of how spaceflight may affect male and female astronauts.

As the crew medical officer, I received special—and additional—training for handling several key scenarios. For example, I would be counted on to collect blood samples, perform urinary (Foley) catheters (has actually happened in space!), execute defibrillation (perhaps the use of the word execute is ill-advised here?), intubations, the administering of sutures, basic dental (pull a tooth) and eye care (search for foreign objects).

I even did a stint in the emergency room of a Houston-area hospital where I actually sewed up a patient’s leg (4-wheeler accident), administered a shot (drug addict recovery), intubated a patient, and performed 2 Foley catheters. I also watched, and then pointed out how—that’s my style— two interns had botched the administering of an anesthetic. They were not very happy with me, a lowly astronaut. It was a tremendously interesting night for me... and fortunately, no one died!

So, just how do we handle on board medical situations? If serious events arise, we contact the ground immediately, while heading to our medical procedures book. Through our ability to talk directly to the Flight Surgeon in real-time (note here this will be a HUGE issue on Mars, what with a 20-minute communication delay), we are able to confirm, and then work through, the appropriate procedures.

To date (thankfully) we have had no critical medical issues on ISS, but when we do, it will be interesting—and perhaps nail-biting if it’s serious—as to what the outcome is. For example, consider a heart attack or burst appendix scenario. It is very possible that part of the crew will depart the station for Earth. And if that were the case, how hard would it be to stabilise the patient, put them in their Sokol space suit, get them strapped in to the Soyuz, depart ISS for Earth, land and get them to a hospital? Scary considerations for me. 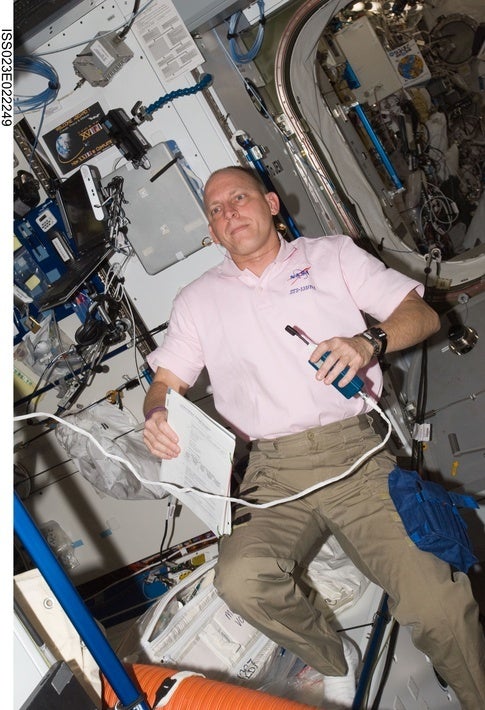 Real-time communication, allowing quick consultation with the ground regarding procedural questions, are keys to success on the ISS today. Mars presents altogether different challenges in this regard.

Bottom line? This is why astronauts are required to go through so much medical screening before selection as astronauts, and then again before they are assigned to fly in space. We don’t want these scenarios to ever occur, but one day, when humans actually move away from our secluded planet Earth, we will need to be ready to accept the challenge.

In the meantime? Keep lookin’ up!