Have a think about what you’d like Netflix to do better. What’s on your wishlist?

If you wished for “offline access to Netflix”, you wouldn’t be alone. It has been one of the features customers have been shouting for over the last few years. Don’t lose hope, streamers: we might be edging slowly closer to a world with offline Netflix, but not in a way you might recognise.

First, a little background. At the heart of the streaming argument is something Netflix calls Open Connect.

The logic goes like this: people who are watching Netflix generate a lot of traffic. It’s 34 per cent of the North American internet hits at peak hours, i.e. when people get home from work and flop on the sofa. And when all that data has to get passed from one part of the internet to another — the places where the internet’s many pipes connect — it needs a lot of room to fit through. As you might expect, these hand-off points just aren’t built to handle as much traffic as Netflix generates, so the folks on either side of the junction wind up arguing about who should pay to build them up.

So ordinarily, if you flop down to watch some Netflix, you’re contributing to this tidal wave of data, and you’re pulling video content all the way across the internet through various different pipes and chokepoint and junctions, adding to the volume of emails and Skype calls and everything else. If there’s just too much, it can’t all get through, so either something (Netflix, usually) has to get slowed down, or someone has to pay to make bigger pipes.

Netflix’s Open Connect offers another option though. The company will gladly put a box with a copy of itself — which is to say, nearly the entire catalogue of its offerings — inside your friendly neighbourhood ISP data centre. That way, when your whole neighbourhood is sitting down to watch Netflix after work, it doesn’t tax the internet at large, or the hand-off points between different parts of the net. Instead, the deluge of data is confined to the “last mile”, that last chunk of network between the local data centre and your cul de sac. It saves everyone a lot of headaches. 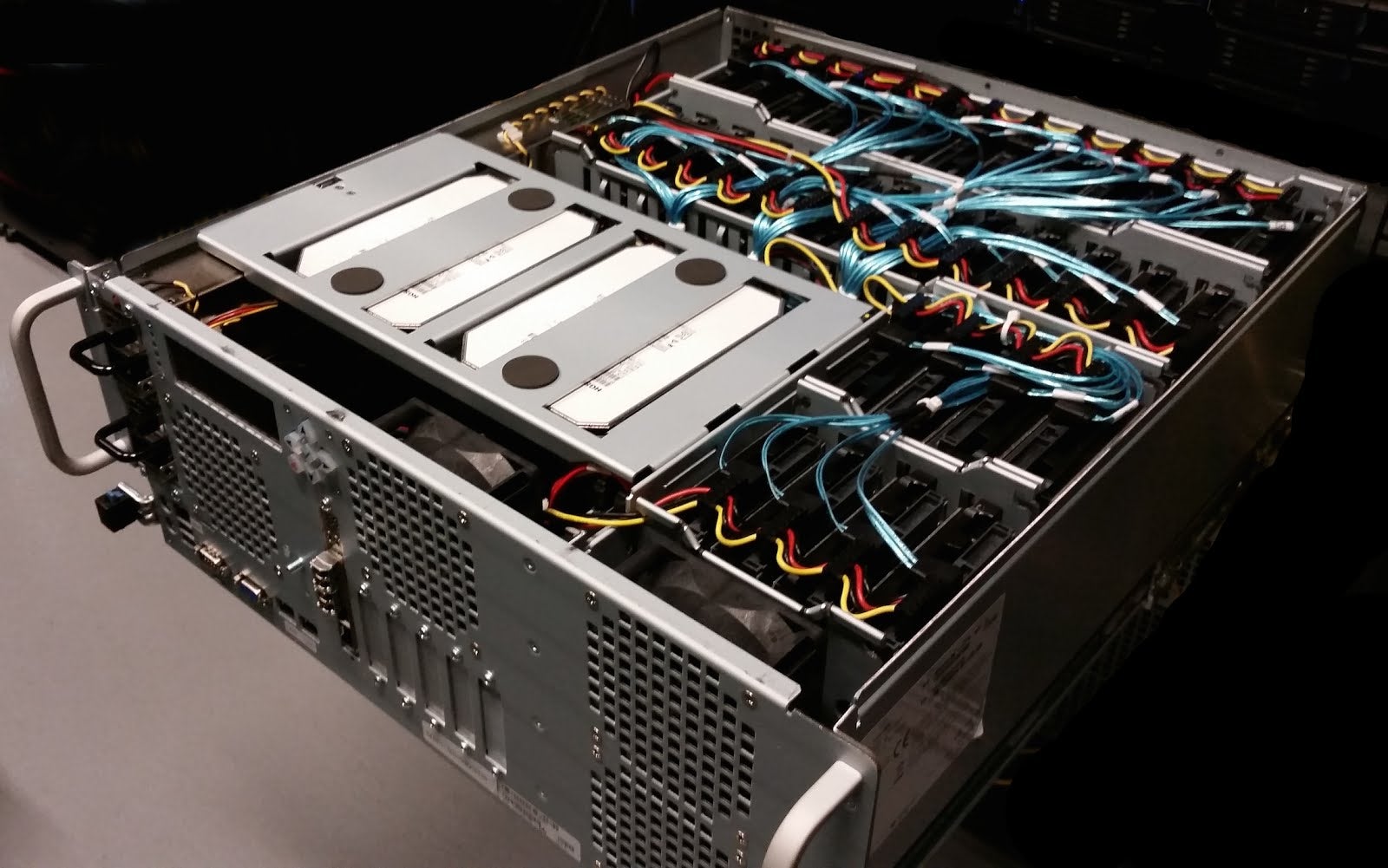 Each one of Netflix’s Open Connect Appliances (OCAs) is basically a badass, connected hard drive. But we’re not talking in GBs of storage here. No, OCAs are measured in TB.

The most basic unit, known as a Rev. A, is a 100TB device. How much storage is that in practical terms? According to Netflix, HD video streams use 3GB of data per hour, so if you do a little maths you’ll find that a 100TB device holds some 34,133 hours of HD video. That’s 1,422 days, or 203 weeks or just under four years of HD video. And for all that's about the size of an old-school PC tower, and weighs just 45 kilos. Heavy, sure, but liftable. It’s hard to lift four years of video – go figure.

At that’s just the start. The beefier Rev. C units come in flavours that offer 120TB to 160TB, or 4.7 and 6.2 years of HD video, respectively. These bad boys are actually a little bit smaller than Rev. As, despite coming in at eight kilos heavier. 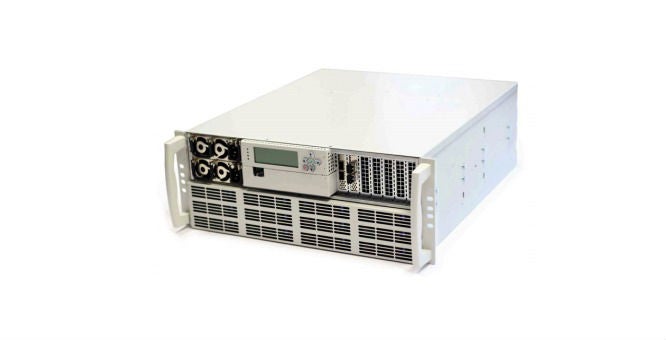 These are the two main models outlined in Netflix’s documentation for the project, and they’re already pretty impressive. But when we reached out for a few more details, Netflix clued us in on a new generation of even bigger, even badder OCAs. The most recent generation holds over 200TB of Netflix in a single box. That’s about eight years of video. That’s totally absurd.

It’d be a serious pain in the arse to fill up that much storage space with content, so lucky for the ISPs adopting these bad boys, each comes fully loaded with a Netflix. It’s rarely — if ever — a full copy, but rather a massive chunk specifically designed for a specific country or region, depending on what’s available and what’s popular. Sometimes it will even have multiple copies of the same show, if something is in crazy high demand.

According to Netflix’s own documentation, “An individual appliance can oﬄoad approximately 60 - 80 per cent of content requests depending on country catalogue size”, but when units start working in pairs, the storage size can exceed the size of Netflix’s library for a region. And when this happens, the pair will use their excess storage to double up on stuff to help deal with high demand, or to make sure that if one fails, the other still has as much content as possible.

But wait, you say. That would be all fine and dandy if Netflix was etched in stone, but it’s not! They add and remove stuff all the time! That’s right, which is why most OCAs take a 7.5TB update. Every. Freaking. Day.

If you had to take a 7.5TB update on your home internet, you would be screwed. For an idea, the average download speed in the United States is 18.6Mbps. So with an average connection, that 7.5TB would take about 40 days to chew through.

Fortunately, data centres tend to have a little more speed to work with. A firehose, compared to your bendy straw. So Netflix recommends a much shorter 10-hour span (from 2AM to noon, local time) where these boxes can soak up their updates with 1.2Gbps connections, fibre optic speeds.

As amazingly awesome as it would be to have your own personal Netflix stashed away in the closet in case of apocalypse or disappearing movies, you’re never going to be able to get your own OCA. To start with, their numbers are fairly limited. When we asked Netflix how many of these things are out in the wild, they told us that so far there are a few thousand — that means roughly one for every 15,000 worldwide Netflix subscribers — though that number is growing.

They’re also expensive. Netflix tells us they cost tens of thousands of pounds. Netflix actually does just give these away — there’s no cost to ISPs who want to install them — but that’s only a worthwhile investment for Netflix when they’re making Netflix better (or just “usable”) for thousands of customers. Considering an OCA costs the equivalent of 93-186 years of a Netflix Instant subscription, you’d basically have to be eternal for it to be worth it to Netflix.

What’s more expensive, however, is data. Specifically sending data back and forth over pipes. That’s why Netflix has these things in the first place: to reduce the cost of sending big video files back and forth, and to make sure the customer experience stays consistent while streaming.

Netflix is obsessed with the customer experience. Like, scarily so. Customer experience has slipped into every marketing person’s bullshit dictionary over the last few years, which means when you talk to tech people at banks and retail stores, etc, you’ll likely hear about how they want their users to feel valued. But when you talk to Netflix about it, you realise it’s not just the flavour of the month, it’s within its religion.

Netflix described the benefit of obsessing on customer experience to me thusly:

Imagine you have five people. Three of them are “green”: they love your product and will happily keep paying for it every month. One is “orange”: they’re paying right now but they’ve got issues. They could unsubscribe at anytime, and they aren’t likely to tell people about how good you are. The other is “red”: a person who maybe can’t afford the product or hates it outright.

The traditional approach of any marketing person would be to get the orange person green, and the red person orange, but Netflix thinks about it differently. Obviously, it wants to convert everyone to green, but knows it won’t do that by going after orange and red people. Netflix instead wants to make the green people even greener. By doing so, they’ll work as advocates, telling the orange and red people how good Netflix really is in a way that a bus shelter ad could never do. That is how you focus on the customer experience.

So when it comes to implementing offline streaming, Netflix has been traditionally resistant. Not just because studio streaming agreements make it hard. If that were the only barrier, Netflix would have made its Original content available to store offline for years. No, Netflix thinks that there’s still an issue with how customers experience offline modes for content. Their specific reasoning is still as yet unknown, but through today’s results announcement, we have a look at exactly the sort of offline mode Netflix have in mind: it’s contextual.

Think about when you can’t use Netflix. Really think. You need to be completely without internet, and these days that’s kind of tough. It’s a fair bet that if you’re a Netflix customer, you’ve got the internet at work, you’ve got at least 3G on the go (if not 4G), and you’ve got your home Wi-Fi. The only time you’re really without data these days is on a plane.

To that end, Netflix has experimented with Virgin America to give customers free Wi-Fi with which to access Netflix.

We recently announced a partnership with Virgin America, where new and existing members are able to stream the full Netflix service to their personal devices (at no additional cost) at 35,000 feet in the sky on newly upgraded Virgin America aircraft. Partnerships like this advance our goal to bring Netflix streaming to members wherever they are and whenever they want.

That’s a good idea, but what if an Open Connect-style box could be put on a plane?

Installing a copy of Netflix onto a plane in place of a piecemeal in-flight entertainment offering put together by an airline would give everyone a great experience for a cost that’s sure to be less than satellite internet connections to every plane in the sky, right?

It’s not out of the question: Netflix’s Chief Product Officer, Neil Hunt, had a similar thought recently:

As an example, what if we can put Netflix in a rack box that essentially contains all of Netflix content that you could imagine putting in an aeroplane server, right along with our existing offerings? That for me is a more interesting thing; can we make Netflix work on a plane, can we make it work on a train, in hotels? That doesn’t necessarily get you Netflix everywhere, all the time. But I think if we can make that work well, that’s a more interesting proposition than trying to change consumer behaviours.

Obviously, consumers in 2015 would prefer to be able to sync a whole season with them and watch it on the bus or train via some sort of client, rather than use their limited and expensive 3G data, but that’s another problem for another day.

That war is being fought by Netflix on a different front against telecoms companies: Netflix doesn’t think there should be data caps at all. CEO Reed Hastings chatted to us about it recently, and you can read that here.

So the offline experience for Netflix is probably coming, you just won’t recognise it yet.