How GoPro is Turning its Athletes Into Storytellers

Sport photography isn’t shot from the sidelines anymore, it’s made by athletes as they do their thing. But before they can do that, they have to learn to shoot like a pro. We went inside the camp where they’re trained.

Though opportunities for adventure at the camp were never in short supply, participating in the activities was only part of the fun. What the five-day programme really focused on was instruction on content creation, and all of the skills that go into it.

(Note that Instagram embedded images are a little iffy on Giz, if you can't see the embedded image, click on its accompanying text to be taken through to the image)

Banff in Canada provided the athletes with diverse, stunning environments where they could do their thing while capturing every epic moment — and GoPro’s training, product development, and media production teams ensured that each athlete was learning the tools and knowledge to create the best possible content. As an adventurer and storyteller myself, I soaked up all the knowledge I could, while having the maximum possible fun.

Full disclosure: GoPro flew me up to Alberta for the week, put us up in a hotel, and put some food in our bellies — while ensuring that there were plenty of opportunities for adventure.

This is Major Tom to Ground Control. I'm stepping through the door... Spent most of the last two days socked in with @jimmy_chin, @tatummonod, @kalenthorien, @jessharcombe, and @jerardinc for a @TravelAlberta shoot - but we still managed to catch an incredible view of the Three Sisters going in.

That’s one way to make an entrance.

I had arrived in Canmore a few days early to go heli-camping with Jimmy Chin (more on that later). On the last day of the trip, our helicopter got socked-in by the weather; the touch-and-go flight out ended up being more like a “touch-down, wait, try to take off, land again, take a nap, then take-off” flight, which resulted in me being fashionably late to the Athlete Camp’s orientation dinner.

There was still plenty of room at the cool kids’ table though, because every table was full of them. To my left was Eric Jackson — world champion and Olympic freestyle kayaker and the founder of Jackson Kayak. In front of me was his son Dane, and son-in-law, Nick Troutman — both renowned kayakers in their own rights. Sitting at the table in front of us was GoPro’s human flight team (including members of the Bomb Squad) — each of whom has expanded the realm of what’s possible while catapulting through the air.

GoPro Featured Photographer - @nickkeating About the shot: Day two of the #GoPro Athlete Camp this year, we spent most of the afternoon paddling Bow Lake in the northern reaches of Banff National Park, Alberta. Like many of Banff’s glacier fed lakes, the water is a brilliant turquoise and even in the late summer hovers around 10 degrees above freezing. Atop our boards and wearing full wetsuits we were more than warm, but @izzi.gomez and I had a few shots in mind that required we jump in. How the shot was captured: Armed with an armada of #HERO4Blacks, Izzi and I paddled our way out to the middle of the lake to get some distance from the shore. Along with some board and paddle mounted shots, our goal was to nail a few over/under moments that captured at once the incredibly clear water and the fresh dusting of snow that had covered the peaks around us. Despite the slower action, I relied on 30/3 Burst mode throughout the day to ensure I nailed the perfect moment. With the choppy, wind swept water constantly crashing against the lens, the extra frames also helped in choosing the one instant in which Izzi’s expression and interaction with the water came together perfectly. #ProTip: Color has perhaps one of the strongest impacts on our initial reading of an image - and with that bright orange wetsuit, Izzi instantly becomes the focal point, letting the rest of the scene slowly unfold in our periphery. Use color to not only make an image more dynamic, but as a tool in directing the viewers eye through a scene. #SUP

At the next table over was Chuck Patterson, an accomplished multi-sport athlete who has professionally competed in nearly every board sport imaginable  – and his protege, fifteen-year-old SUP champion Izzi Gomez. Sitting next to them was Liu Yong Bang, aka “Abond”, one of China’s top climbers who has been pioneering new 5.14 routes in his homeland. These people represented only a fraction of the talent present at the camp.

One might be inclined to think that with so many hotshots present, the camp would be unable to function at all thanks to an overwhelming confluence of ego. However, that sentiment could not have been further from the truth. Instead, the camp was more like a reunion of friends. Competitive friends no doubt, but friends who were there to have a good time and, more importantly, who were eager to learn. Fittingly so, because learning took a central role for the duration of the event.

On the first morning we all gathered in the hotel’s main conference room for a presentation from GoPro’s training and media production teams. The focus for the next few days would be storytelling; their presentation was a great introduction of the topic, covering both conceptual and technical ideas about what makes a good story and tying that into the entire production process as it related to GoPro. A few hours later, they sent us out into the wild, equipped with an armament of cameras and every mount imaginable.

I tagged along with the watersport athletes. Before launching into the turquoise river, we got a first-hand look at how they collaborated with GoPro’s media production team. The kayakers in particular have innovated loads of new mounts for their gravity-defying waterborne vessels; the GoPro crew ensured that they would be set up to get killer angles on every rapid.

Shredded some gnarly whitewater yesterday at the @GoPro Athlete Camp. Today's agenda? Jumping out of an airplane strapped to @neilamonson1 with the @goprobombsquad! @travelalberta

The paddle pirates launched, fully prepared to shred foamy whitewater on their kayaks and SUPs; we followed behind splashing our way down the river in an inflatable raft. Later that night, the athletes and GoPro crew met in the conference room once again, but this time for an edit session.

They had two primary deliverables due by the end of the camp: five killer still shots, posted on social media for the purpose of an engagement contest; one short instructional video that would serve to teach their community some GoPro-related skills while simultaneously establish each person as not just a pro-athlete, but as an authoritative content creator as well.

In order to finish on time they would have to work all day (shooting) and into each night (concepting and editing).

The next morning we caught a shuttle flight to Edmonton Skydive’s jump zone, where we’d get to do a tandem with members from the Bomb Squad. Neil Amonson and I experienced a gravitational pull towards each other and paired up to make red-beard babies at 12,000’ — probably the world’s first.

Chris from @gizmodo ripping through some altitude with @neilamonson of @goprobombsquad above beautiful Alberta, Canada. @travelalberta #explorealberta #GoPro @gopro

While Neil and I were freefalling, JT Holmes dropped by for high fives and fist bumps; a few minutes later Marshall Miller did a flyby with F-22-like precision and speed in his wingsuit — mere metres from our canopy.

Afterwards, a few of us squeezed in a sunset SUP session at Two Jack Lake, thus providing another opportunity to create some beautiful photos. And later that night? More editing.

Climbed my hardest route to date at the @GoPro Athlete Camp today - a 5.10a called "Public Enemy" behind @banff_lakelouise. Not quite a send (had one fall at the crux) - but progress nonetheless! That last move was cruxy! @travelalberta @kimerakoffee

On the final full day, we headed out to Lake Louise. You’ve probably seen a hundred Instagram pictures of someone standing in front of it while wearing a bright colored rain jacket. The reality of that scene is that they just stepped outside of the lakefront chateau to take it. The real magic is experienced at the back of the lake, where a hidden crag towers above its chalky turquoise waters. 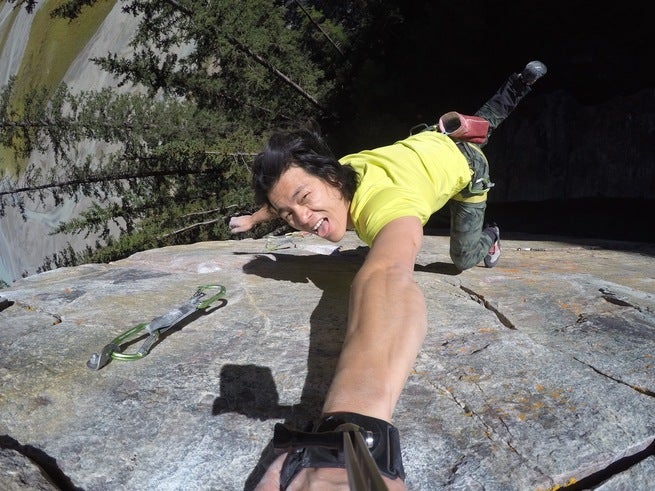 I managed to get a couple of routes in, including my first 5.10a (one called “Public Enemy” that featured a small roof for the crux), but it was even more exciting to watch Abond and his girlfriend Ting Xiao send 5.12 overhangs like it was their job. Which I guess it is. The GoPro crew was on-site, helping them set up their cameras to get the best possible shots.

Back at Banff, the entire group rallied at a ranch for some of the best damn BBQ I’ve ever had, and took turns seeking eight seconds of fame on a mechanical bull. The highlight of the night, however, was watching the culmination of seventeen inspiring, creative, passionate athletes’ hard work.

Climbed my hardest route to date at the @GoPro Athlete Camp today - a 5.10a called "Public Enemy" behind @banff_lakelouise. Not quite a send (had one fall at the crux) - but progress nonetheless! That last move was cruxy! @travelalberta @kimerakoffee

So what do you and I get out of all this?

Well look at the photos and videos you can see in this story. They’re not canned shoots where a photographer is telling the athletes what to do, they’re authentic captures of cool people doing the stuff they love to do, and sharing those moments with you. As observers, we’re getting better photos and videos of the sports we love to watch. As amateur athletes trying to share our own adventures, we’re getting the tools, inspiration and knowledge necessary to do that better than ever before.