Remember EATR, the Military Robot That Was Supposed to Eat Humans?

“We completely understand the public’s concern about futuristic robots feeding on the human population, but that is not our mission,” Cyclone’s CEO Harry Schoell said in a press release in 2009.

What could make the CEO of an alternative energy company issue such an insane statement? Well, Cyclone had a contract with DARPA for a little guy named EATR, the Energetically Autonomous Tactical Robot. And once news began to circulate about EATR, the public became concerned that this robot was powered by feasting on the flesh of dead people.

Back in 2009, Cyclone Power Technologies was working with DARPA and Robotic Technology Inc., to develop a robot that didn’t need a battery or a fuel tank of any kind. The goal was to build a military robot that could go on endurance missions, and feed on the vegetation around it without needing to be refueled or have a battery recharged by humans. Above, we see a rendering of the EATRs on the battlefield of the future, roaming around autonomously with drones overhead.

All EATR would need for power was the biomass it could find like dead trees. Oh, and did I mention it had a chainsaw? For chopping up vegetation, of course. As soon as people heard about this robot, they started asking the obvious question: Since this is a robot for the military, could it feed on dead humans who are killed in battle? 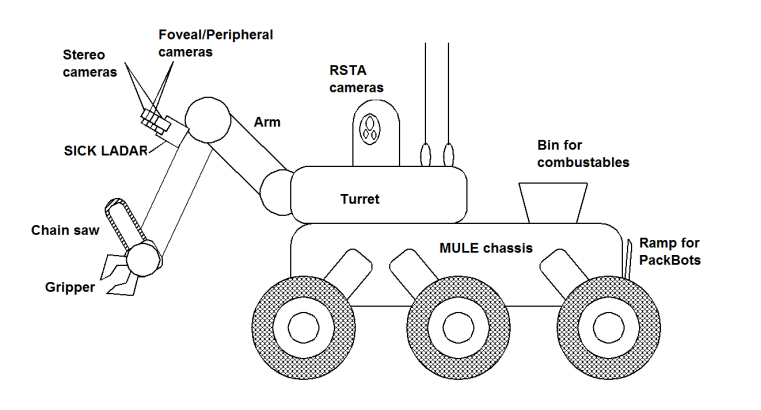 Reporters asked questions, blog posts were written, and EATR became, in the eyes of the public, the robot that was going to swallow humans whole. Or, if not whole, then chopped up with that chainsaw arm on the front. Cyclone, Robotic Technology Inc, and DARPA quickly went into damage control mode, despite the fact that they were never the ones claiming that EATR would ever feed on humans.

“We are focused on demonstrating that our engines can create usable, green power from plentiful, renewable plant matter. The commercial applications alone for this earth-friendly energy solution are enormous,” Schoell said.

And he was right. The plan was a solid one. And it had tremendous commercial application that didn’t involve eating humans at all. The company estimated that about 68 kilos of vegetation could provide sufficient energy for 100 miles of driving. But as far as we know the plans were scrapped and EATR is no longer being developed.

Slide from Robot Technology Inc showing how EATR would work (2009)

Today, people are worried about how advanced military robots have become. For example, a recent video showing the ATLAS robot running in the woods generated concern online. Yet, since it’s completely tethered for its power, this version of ATLAS is not much more advanced than what we’ve seen plenty of times before.

That’s not a robo-panic. Back in my day we had real robo-panics. Wake me up when Atlas skips through the woods while munching on a human lollipop.

This article originally appeared on Paleofuture, a Gizmodo blog looking into the future that never was