Email Is the New Generation Gap

By Annalee Newitz on at

Two weeks ago, Giz US surveyed 3,670 people online about how they communicate. They discovered a remarkable difference between people over 41, who say they often talk on email more than they do in real life, and younger people who love in-person meetings and use a variety of apps. Is this our first digital generation gap?

The survey was three simple questions: it asked for each respondent’s age, then asked how they communicate at work/school, and how they communicate with friends. People could choose multiple answers to the communication questions, which listed popular apps, as well as “meeting in person” and “using the phone.” I wasn’t interested in numbers of hours that a person spent with each medium of communication; instead, wanted to know how people would describe the way they talk to other people. So what we have here is a record of people’s subjective beliefs about the main ways they communicate.

A caveat: This is by no means a scientific study, and participants were obviously drawn from people who read Gizmodo and their friends. So it’s a group biased toward online communication, and clustered pretty heavily in the 21-40 age bracket (out of 3,670 respondents who told us their age, 1,337 were between 21-30, and 1,191 were between 31-40). We didn’t ask people about their country of origin, but based on Gizmodo’s readership, it’s reasonable to speculate that most respondents came from the developed world and the west.

The statistic that stood out immediately was how often people use email at work. First-generation internet users (people between 41-70) say they communicate with email more often than they communicate face-to-face with co-workers. 91% of them reported talking to colleagues with email, while 86% said they talk in person. 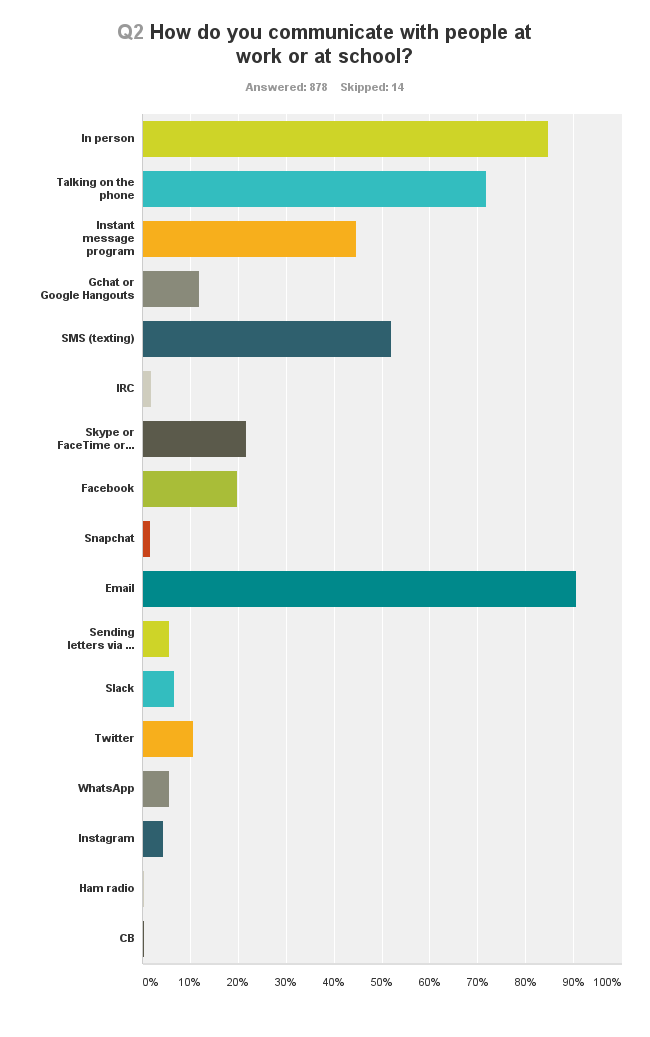 Above: Responses from people ages 41-70

By contrast, second-generation internet users between 21-40 said they used face-to-face meetings to communicate at work more than they used email or any other method. Still, the youngs used email quite a bit at work (84%, compared to 91% who talked in person). This may be because they are talking to the over-40 crowd. Or it may be the result of using workplace software systems like Outlook that prioritise email. 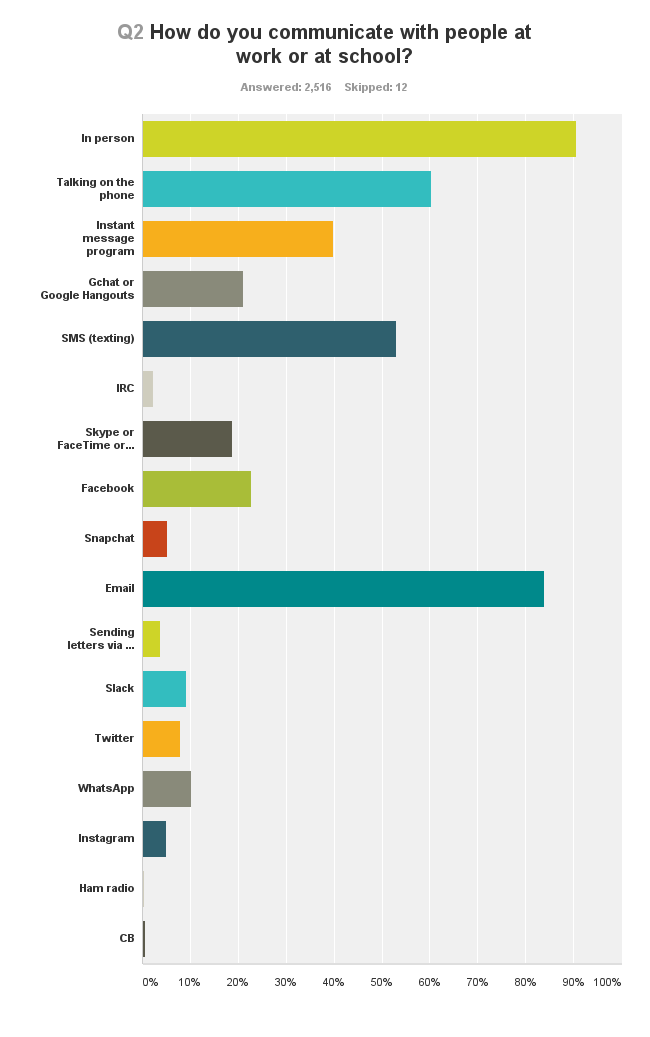 Above: Responses from people age 21-40

Despite all the media freakouts about the ascendency of virtual office software like Slack, only 8% of our total respondents reported using Slack at work. 84% of our respondents from all age groups said they communicate with email at work.

Another generation gap emerges when you look at differences in how people talk to their friends. Among people age 21-40, only 52% said they talked to friends via email. The under-40s were far more likely to talk using Facebook (69%), texting (83%), and the phone (61%). 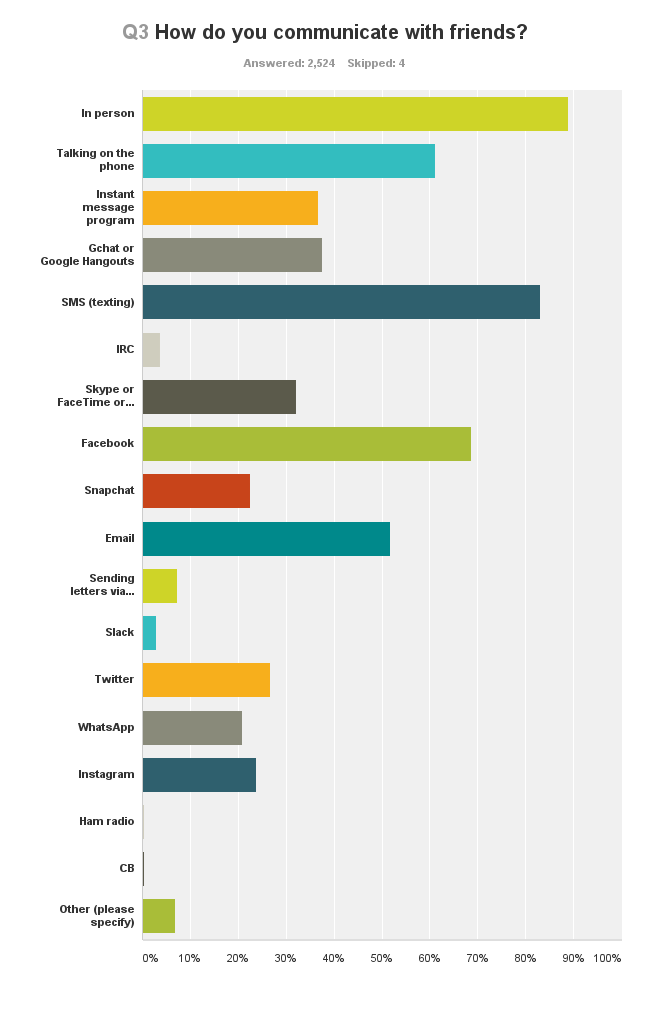 Above: Responses from people age 21-40

But 74% of people aged 41-70 used email to communicate with friends, though they slightly preferred in-person meetings (86%). They texted very slightly more than they emailed (75%), and more than they used the phone (68%). People from every age group reported meeting friends in real life more often than using all other kinds of communication. 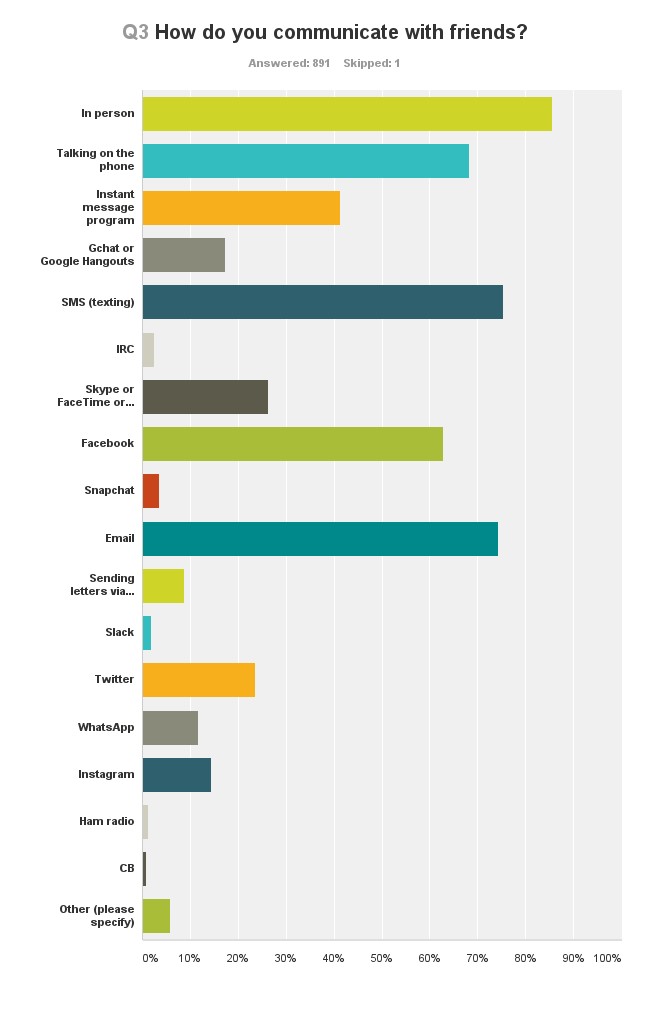 Above: Responses from people ages 41-70

Still, it’s clear that people over 40 are part of an email-centric generation. There’s a big generational dropoff in email use among friends: from 74% of over-40s using email to talk with friends, to 52% of under-40s using it. Plus, over-40s say they use email more than in-person meetings at work.

That last statistic is rather poignant. This is a generation of people whose days are ruled by a slow, annoying, spam-ridden app. No wonder this generation has churned out thousands of books, movies, and other stories about how technology is eroding relationships and mangling our minds.

Snapchat and the Micro-Generation Gaps

People below the age of 40, despite growing up with a mature internet and tons of mobile devices, say they communicate in person more than their elders. Of course, they are also online all the time. And there are definite generational differences within this group as well. 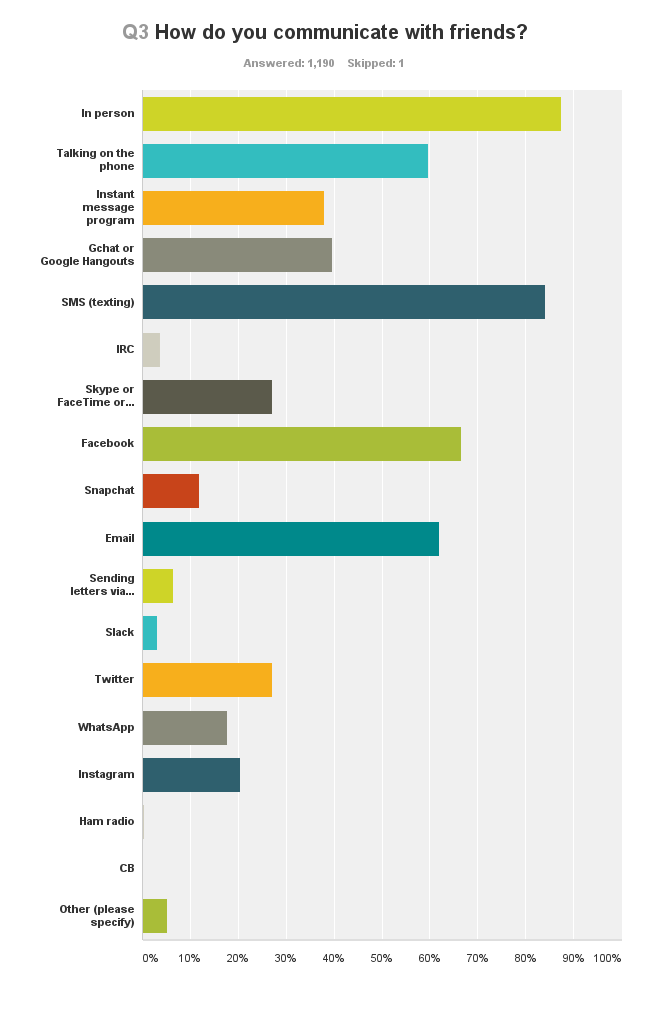 Above: Responses from people ages 31-40 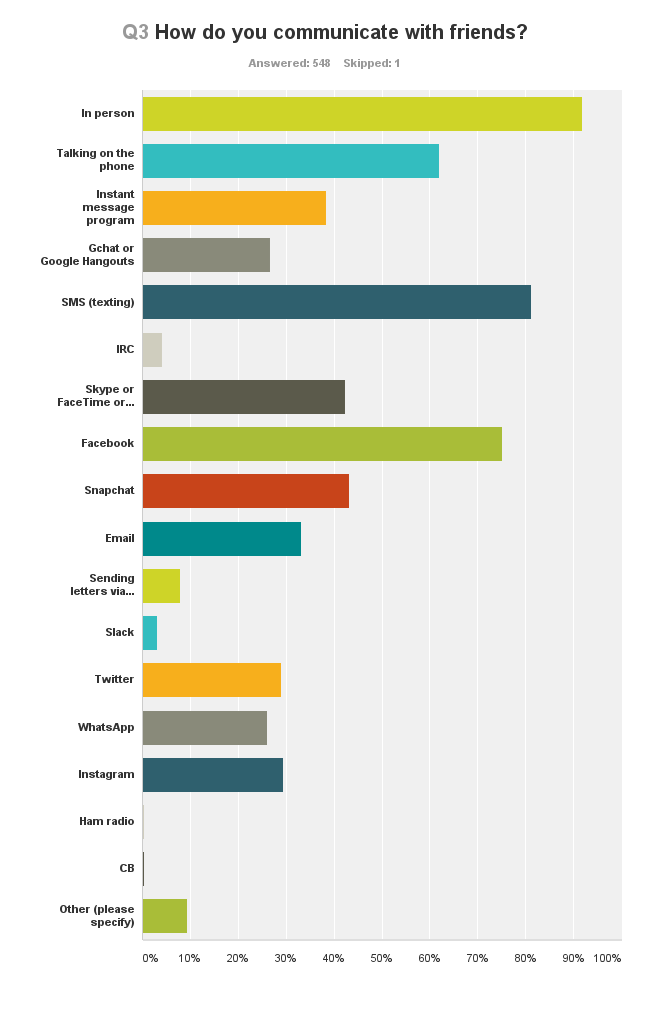 Above: Responses from people ages 21-25 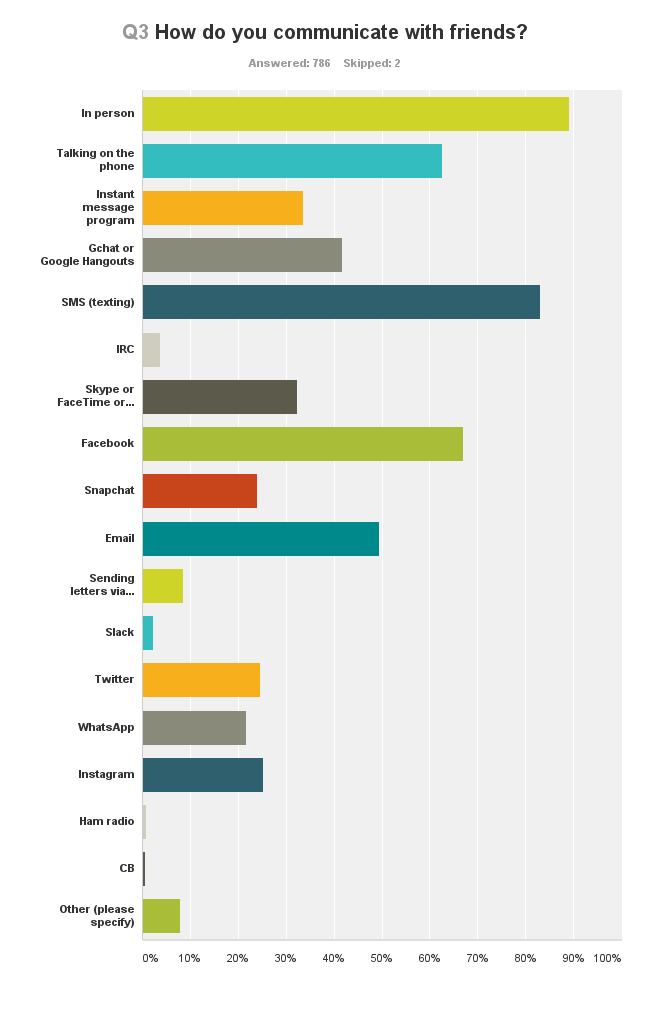 Above: Responses from people ages 26-30

A lot of these gaps are probably a result of the difference between college students and people working their first jobs. There’s a lot more time to goof around on Snapchat between classes than there is when you’re trying to get established as a grown-up with an actual income. And there’s a lot more reason to video chat with far-away friends at other colleges or back home.

Regardless of the differences between people in the 21-40 range, the pattern we see is that this is a group that uses several different apps to communicate with friends, though mostly they rely on Facebook. This could reflect the rise of mobile devices, or it might be some kind of natural ageing process when it comes to technology. Perhaps as we age, we lean less on social media and more on the kinds of one-to-one conversations fostered by email.

Texting Is For Everyone

Texting and IM ruled this survey when it came to talking with friends. Its popularity appears to transcend the generations. Email may dominate workplace communication, but texts and IMs dominate our social lives. 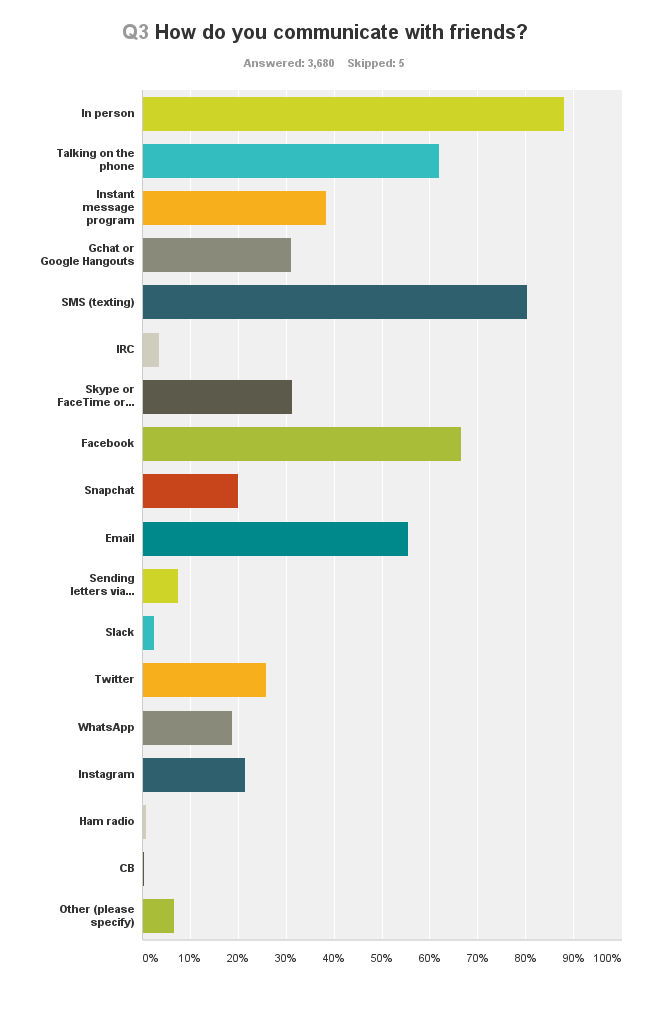 Above: Respondents in all age groups.

People of all ages who took our survey report that they text and IM with friends more than they use the phone, Facebook, or email. The only thing that’s more popular than texting with friends is actually getting together and hanging out with them in real life.

Of course, this is where the blind spots in our survey become obvious. We might have gotten different answers if thousands more people had taken the survey by phone, or in person. Still, the Gizmodo survey suggests persuasively that there are generation gaps when it comes to how we use technology, and that these gaps may affect how we understand what technology is doing to our relationships. And hopefully, we’ll start to see more scientific studies that look at differences between generations of people who grew up online, instead of studying only the differences between those who grew up with the internet vs. those who didn’t.

As the internet’s first generation begins to retire, we’re approaching a time when there’s no one left alive who hasn’t grown up with networked computers. Email is the first generation gap of the information age as we’ve known it in the developed world. But the humble text brings us all together.