Intel has announced that it’s putting its insane 72-core 'Knight’s Landing’ supercomputer chip into production. But perhaps more exciting is the fact that it has plans to ship desktop workstations that contain the face-melting computational powerhouse.

PC World reports that Intel plans to ship in the first half of next year a “limited number of workstations” that pack the powerful slab of silicon. In turn, PC makers may more widely adopt the company’s supercomputer silicon in desktop models – at least according to Intel’s Charles Wuischpard.

So what kind of specs, exactly, can you expect from the Knight’s Landing chip? Well, unlike the chips in your desktop, this supercomputer processor places all of its cores onto a single piece of silicon (you can see the die map in the image below). Then, they’re bundled up — along with 16GB of on-package MCDRAM memory — into a PCI-E add-in card (like the one pictured above, which is an engineering sample of an older Knights Ferry model). It’s a bit like those crazy Nvidia GPUs that get thrown into supercomputers. 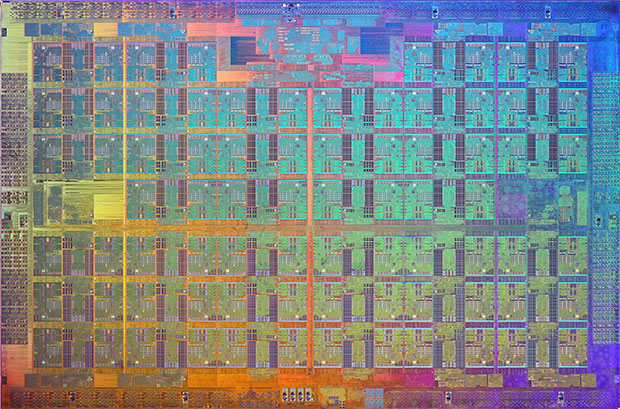 The resulting hardware can compute single-precision calculations at a rate of 8 teraflops, or double-precision calculations at over 3 teraflops; if that means nothing to you, just know that those stats are ridiculously powerful. According to PC World, it will be used by the US Department of Energy for its 9,300-core Cori supercomputer, and Intel claims that 50 different manufacturers will ship systems that use it in time.

Meanwhile the desktop workstations (think insanely beefed-up versions of the CAD, graphics and film editing computers that get used in offices where money is no object) will be made available to researchers who would like to use a supercomputer but can’t gain access to one. The idea is that they’ll be able to develop and test code on it, before farming it out, error-free, to a supercomputer somewhere down the line.

So, you might not quite be getting one in your iMac any time soon, but Intel is at least trying to put its silicon in the hands of people that may not have previously had access to it. [PC World]