It’s by design that most modern cities grew up around rivers or coastlines. But today, those bodies of water pose problems for thousands of commuters who’d prefer to ride or walk – and cities are developing new infrastructure to bridge them.

Leading the way are countries like Sweden, Denmark, and the Netherlands, which have all developed really interesting ways to integrate biking and walking routes into their existing streets. And now, a Danish design firm called Bystrup, which specialises in bridges, has been chosen to import some of that expertise to London, where a footbridge over the Thames will link Pimlico's embankment and Nine Elms on the Southbank.

It’s not great timing: the capital has spent the last year embroiled in a contentious debate over the design of a different pedestrian project, the Garden Bridge, which was criticised as a star-powered personal project on behalf of Joanna Lumley, with little benefit to the public (and another pedestrian bridge, this one in east London, was announced this week as well). Likewise, the Nine Elms bridge has also been criticised as unnecessary: the Guardian cites “public fury” at the proposal, but admits that the “elegant” design “shows very little evidence of causing harm”.

So, why the 'fury'? Well, one councillor told the Architect’s Journal that the bridge, which was picked from a shortlist we reported on in July, would have a “damaging impact on Pimlico’s last remaining piece of public open space”. The problem for Bystrup, then, was how to reduce the area the bridge takes up on either side of the river, yet still make sure it would be high enough to clear the water. Another hurdle: the elevation change would need to be subtle enough to remain rideable for people on bikes, too.

Most bridges would do this with a long, sloping ramp. But instead, Bystrup came up with a clever and simple solution: they coiled the necessary elevation gain into a spiral at each end, looping cyclists and walkers around a circular path that hangs from the suspension cables at each tower. 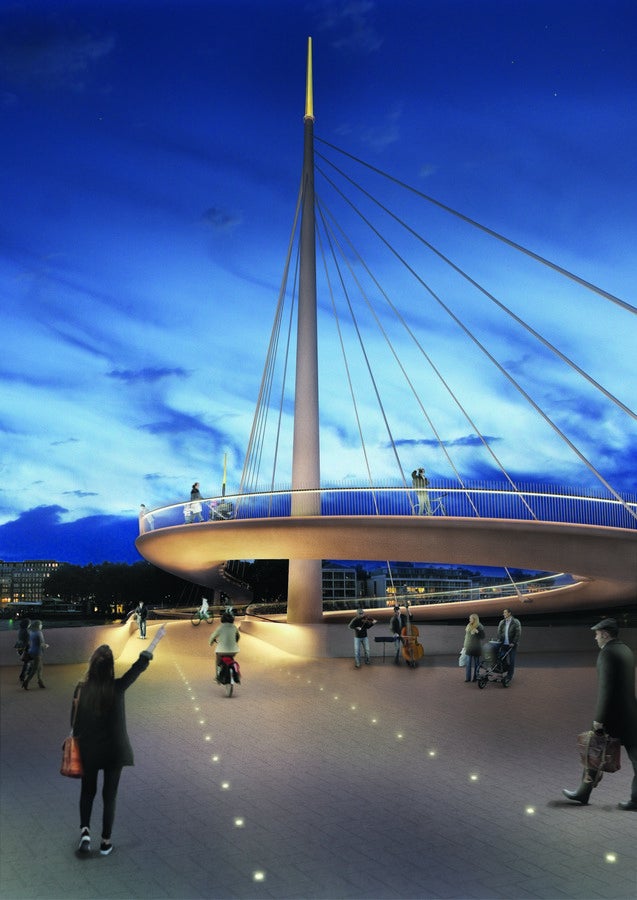 It’s a little bit reminiscent of Delft’s suspension bike bridge, which was completed in 2013 in the Dutch city by IPV Delft, or this bike bridge that opened in Copenhagen last year. 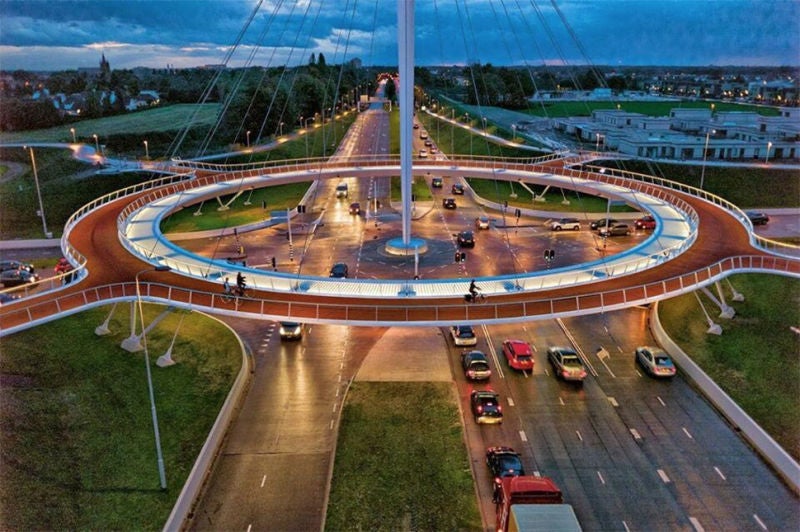 For now, the project still has a few hurdles to clear, so it’s not a done deal. But it’s hard to root against a smart idea for pedestrian infrastructure. [Bystrup; h/t Architect’s Journal and ArchDaily]