Remember, Remember: There's a Downside to All Those Guy Fawkes Bonfires

“Remember, remember the fifth of November....” It’s that time of year again, when we celebrate Guy Fawkes Night with extravagant fireworks displays and bonfires to burn the traitorous Fawkes in effigy. But a new study says that all that extra smoke and debris in the air wreak havoc with visibility.

The idea for the study, published in the journal Weather, grew out of an informal chat over coffee and biscuits in Birmingham, according to Francis Pope, one of the co-authors. His graduate student, Ajit Singh, was keen to test his idea for using historic visibility measurements — which stretch back hundreds of years — as an indication of historic levels of air pollution. In contrast, pollution monitoring is a relatively recent innovation.

“We realised that the UK has a ready-made yearly test every fifth of November,” Pope told Gizmodo via email. He's talking, of course, about Guy Fawkes Night, which marks the foiling of the infamous Gunpowder Plot of 1605 to assassinate King James I by blowing up the House of Lords. The combination of lots of fireworks and bonfires across the country pours a lot of extra particulates into the air, albeit temporarily.

Pope and his colleagues wondered how much this would impact visibility, building on numerous prior studies providing evidence for such a connection. The Birmingham group chose Nottingham for their specific case study because it had the nearby monitoring stations they needed: one to monitor visibility and the other to monitor air pollutants. They used datasets tracking weather and air pollution over a 13-year period (2000-2012) and looked for any marked decreases in visibility coinciding with Guy Fawkes Night. 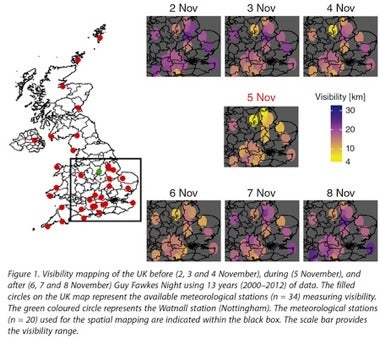 While fireworks do have some nasty compounds, and particulate matter isn’t necessarily good for you, either, brief annual exposure shouldn’t have too many adverse health effects, according to Pope. The biggest concern is the impact on driving conditions, since there are likely to be a lot of cars on the road on Guy Fawkes Night, and lots of revellers partying late into the night. If it’s a relatively clear night, Pope said a 25 per cent reduction in visibility wouldn’t make much difference to driving conditions. But if the visibility were already poor (particularly with high levels of humidity) an extra 25 per cent decrease could prove pretty hazardous.

In fact, their paper cites a tragic car accident in 2011 on the M5 motorway in Somerset that killed seven people and injured 57 more. “The resulting investigation found that a local fireworks display near the road might have contributed to the poor visibility on an already foggy night,” the authors write, although they note that “no blame was assigned to the organiser of the fireworks event”.

Keeping the fuel for the bonfires dry before the big night would result in less smoke, and fewer particles released into the air; as would having fewer bonfires in general. That said, “I do enjoy a good bonfire,” Pope admitted. It's nice to keep the fires of tradition burning.