Graphene could make it possible to build ultra-thin, flexible thermal sensors for built-in night vision technology — just like that lethal alien in the Predator franchise.

Modern night-vision equipment exploits the generation of heat by living bodies by focusing the thermal emissions with a special lens. The signal is then transmitted to IR detectors, which create a detailed pattern based on variations in temperature. That so-called thermogram is then turned into electrical impulses, which a computer analyses and sends to the display. The end result: the user sees that data represented as various colours, depending on the intensity of the IR emission.

In the original 1987 film, Predator, Arnold Schwarzenegger’s band of mercenaries is picked off one by one by an alien with infrared vision, which can be further enhanced with its special hunting helmet. What a Predator really needs is a built-in thermal sensor, like pit vipers, which have two thermoreceptors on either side of the head that look like small pits. These built-in sensors let the snake figure out how much heat is being emitted from a source, and how far away it is.

Folks who rely on IR imaging would like that kind of system, too: firefighters, policemen, and the military, to be sure. But IR imaging is also useful for detecting heat leaks in homes, monitoring blood flow, and seeing beneath layers of paint.

Yet there are limitations to the existing technology. It’s tough to span the entire infrared range, for one thing, which runs the gamut from near-, mid-, and far-infrared radiation. You need different sensors for each of those. And the equipment for mid- and far-IR is bulky because the sensor needs cryogenic cooling in order to filter out background noise. Only then can it process a decent image. 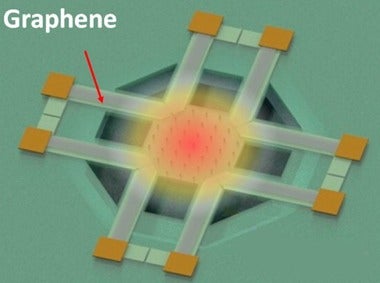 Writing in the journal Nano Letters, researchers at MIT describe their new graphene-based thermal sensor design. Among its many other useful properties, graphene is sensitive to light in the entire infrared spectrum, as well as visible and ultraviolet light. It’s also very thin, a mere atom thick.

Integrate a layer of graphene with a silicon microelectromechanical system (MEMS), and you can skip the whole cryogenic cooling system to detect a person’s heat emission at room temperature. Plus the material’s one-atom thickness means the whole thing can be thin, flexible and transparent. Scale up the manufacturing to lower costs, and you’ve got a winning commercial product.

This isn’t the first group to exploit graphene’s unique infrared properties for IR imaging. Last year, scientists at the University of Michigan created a prototype graphene-based contact lens that could image IR at room-temperature. That device is about the size of a fingernail and could be scaled down further, making it suitable for contact lenses or arrays of infrared camera sensors for wearable electronics.

It’s likely that soon we won’t need bulky equipment, or uncomfortable goggles, to stalk our prey in the dark. We can just pop in a pair of contact lenses and voila! Instant night vision. That should help even the playing field the next time Predators launch an attack.