Ladies, don’t say physics never did anything for you. Your days of awkwardly pulling up your slipping strapless bra during a night on the town—thereby ruining the illusion of glamorous savor faire—may finally be over, thanks to the physics of tiny gecko feet.

Meet the latest designs from Kellie K Apparel, a start-up company with a mission to reinvent the strapless bra. It’s the brainchild of Anthony Roy, a robotics engineer with a PhD form Caltech. He got the idea one night several years ago, when his then-girlfriend, Kellie (now his wife), wanted to wear a particular top with bared shoulders for an evening out, but lamented the lack of a dependable strapless bra: “She said she didn’t feel like having to deal with pulling up the bra all night.” Yeah, most women can relate.

Being a devoted boyfriend (now husband), Roy decided to design a better bra for Kellie, drawing on his engineering and robotics background. 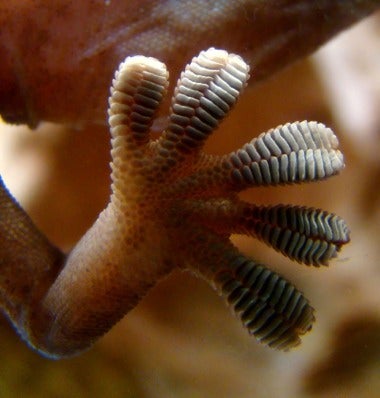 There’s lots of ongoing scientific research into gecko feet, because the creatures can adhere to almost any kind of surface, making them fantastic climbers. That’s due to billions of tiny hair-like structures on the bottoms of their feet (see left).

In 2000, University of California, Berkeley, physicist Robert Full realised that this strong adhesion came about because of Van der Waals forces between molecules. These forces are usually not significant, but become so at very small micro- and nano-scales. Gecko foot hairs are small enough to feel those Van der Waals forces.

Innovation soon followed. A few years later, Andre Geim’s lab at the University of Manchester in England created a gecko-inspired sticky tape strong enough to suspend a Spiderman action figure from the ceiling indefinitely, although it was difficult and time-consuming to engineer more than a few centimetres at a time. Stanford University also has an active research program in developing biomimetic adhesives inspired by the gecko foot.

In particular, Roy recalled a robotic design by scientists at NASA’s Jet Propulsion Laboratory designed around the gecko’s foot. Thus his own GeckTech was born: a small patch that sticks to the skin via that same physical mechanism.

The patches form the lining of two different strapless bra designs offered by Kellie K Apparel: the Alice and the Ava, available in black, beige and white. (The company also offers matching bikini-style underwear for the black and beige varieties.) Per the company’s website:

GeckTeck is a biocompatible, silicone-based material that achieves superior frictional adhesion using the same physical properties geckos use to cling to almost any surface. The material is designed so that it makes intimate contact with even the most sensitive skin without irritation. Such close contact creates an intermolecular attraction known as Van Der Waals forces that, on a micro level, keeps the lining close to the skin while still being comfortable to wear.

The first prototypes appeared a couple of years ago, and Roy has now refined his design based on customer feedback. He’s in the final hours of a Kickstarter campaign to raise funds for Phase 2 of the project, having raised just over $17,000 of his $26,250 goal.