Experienced surfers are great intuitive physicists, able to spot the best waves and manipulate the various forces at play because they’ve spent years actively developing those skills. French scientists at the Ecole Polytechnique in Paris are quantifying what good surfers know intuitively by building their own mini surfing laboratory.

Their work could lead to improved surfboard designs, as well as a means of tailoring waves for cargo delivery in cities without ports. Graduate student Eline Dehandschoewercker described the research work yesterday at a meeting of the American Physical Society’s Division of Fluid Dynamics in Boston.

We already have a good idea of the basic physics involved in surfing. You paddle out from shore, turn your board around, and bob around a bit while waiting for a decent wave. There’s no acceleration at this point, and no net force — just gravity and buoyancy. When a promising wave comes along, the trick is to paddle madly to match the speed of that incoming wave; fail to do so, and the wave will just pass right by. Get it just right, and you’ll “catch” the wave for an exhilarating ride to shore.

Catching the wave is just the first step, since a moving wave is the very definition of a slippery slope, and in order to ride it, a good surfer must shift his or her weight back and forth to stay near the surfboard’s centre of mass. You’re also dealing with friction, or drag, along the bottom of the surfboard, and hydrodynamic forces (exerted by a moving fluid): water moves up the front of the wave, collides with the board, and is deflected around it, leaving a telltale spray in its wake if the surfer is moving fast enough.

Balance those competing forces just so, and you’ll have a successful ride. Otherwise the surfboard will torque or twist. If the nose is too low, you’ll pitch forward into the surf, possibly getting a mouthful of saltwater in the bargain; too high, and you’ll lose momentum and just stop.

Good surfers exploit the same basic physics principles as roller coasters, exploiting gravity by dropping down the face of the wave to gain kinetic energy, trading off potential energy as they lose altitude. The tradeoff makes it possible to use the accumulated kinetic energy to ride back up to the wave’s crest, and the cycle repeats all over again.

But the key is choosing just the right wave. Avid surfers are highly skilled at eyeballing the ocean and identifying promising waves for surfing purposes (by size, by when they’re likely to break), as well as estimating how fast the waves will be travelling by the time they reach the surfer. It’s all pretty intuitive, built from years of experience. 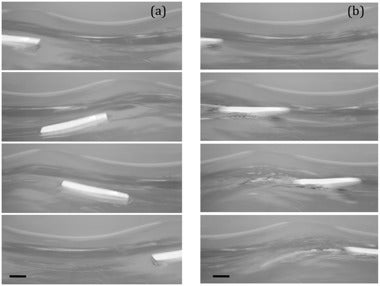 Intuition isn’t sufficient in science. The French researchers wanted to quantify the ideal conditions for a perfect wave more precisely, so they built a mini-version of a Maui beach in their Paris laboratory. (Asked if she personally surfs during a press conference, Dehandschoewercker quipped, “Every day in the lab.”)

Dehandschoewercker built her own version of a wave-generating machine to create 15-inch waves in a large tank. She focused on two kinds of waves: non-breaking waves are smooth and steady, propagating without too much energy displacement; breaking waves have steep slopes and lots of energy displacement. It’s the latter that are ideal for surfers, because they can take advantage of that energy displacement. To mimic a surfboard, she used small pieces of balsa wood, attaching sensors to the bottom to measure the force generated by its undulations. Then she studied the behaviour of the wood blocks, varying things like length, width, and how the mass was distributed on the boards.

According to Dehandschoewercker, traditional surfing intuition is on target: the perfect wave is steeply sloped — the steeper the slope, the easier it is to catch the wave. But the board has to hit just the right depth of submersion in the water, too, otherwise it won’t accelerate along with the moving water.

She acknowledges that her little rectangular bits of balsa wood are just a rough approximation of a surfboard; the next stage will be to study the precise shapes of various boards to determine the optimal design, although this depends in part on the surfer. For instance, there’s usually a tradeoff in terms of board length: you get more stability with a longer board, so that’s a good choice for neophytes. A shorter board gives you better manoeuvrability, but it’s more difficult to catch that initial wave, so those are best for more experienced surfers. Having a better, quantifiable definition of what makes for the perfect surfboard should make it easier to tailor board designs to individual surfers.

Their work should also prove useful to scientists who study the motion behaviour of the many living things that regularly hitch a ride on a passing wave — everything from dolphins to plankton. But the most intriguing potential application might be designing special wave engineering machines capable of creating ocean waves with just the right amplitudes and wavelengths to convey cargo to shore aboard very large surfboards. Such machines could be attached to ships, to be used when delivering cargo to areas that don’t have convenient ports.