The Painstaking Business of Road Tripping With a Satellite

As a piece of hardware, a satellite is a paradoxical mix of super-strength materials and utterly fragile components. It needs to withstand the heat, cold, and g-forces of space travel—but still be able to take super-sensitive readings from hundreds of carefully-calibrated components.

There are more than two thousand satellites in orbit today, and thousands more will be launched into orbit over the next few years. So maybe it’s no surprise that there’s a booming business in getting these fragile, million-dollar spacecraft from the clean rooms where they were built to the launch sites where they will be prepared to leave Earth.

Top: NASA’s Landsat Data Continuity Mission (LDCM) satellite inside its payload in a cleanroom in 2013. Bottom: The Soyuz TMA-14M spacecraft on the way to Baikonur Cosmodrome in Kazakhstan. NASA/Joel Kowskyvia Getty Images.

It’s a bigger undertaking than you’d think: Consider that there are only so many launch sites in the world, while satellites may be assembled thousands of miles away. Even rockets face fewer problems, since they’re necessarily exposed to Earth’s atmosphere.

But satellites are different: They require incredibly complicated machinery and HVAC systems to protect them from our gritty, unpredictable atmosphere until they’re packed into the payload that will take them into orbit. 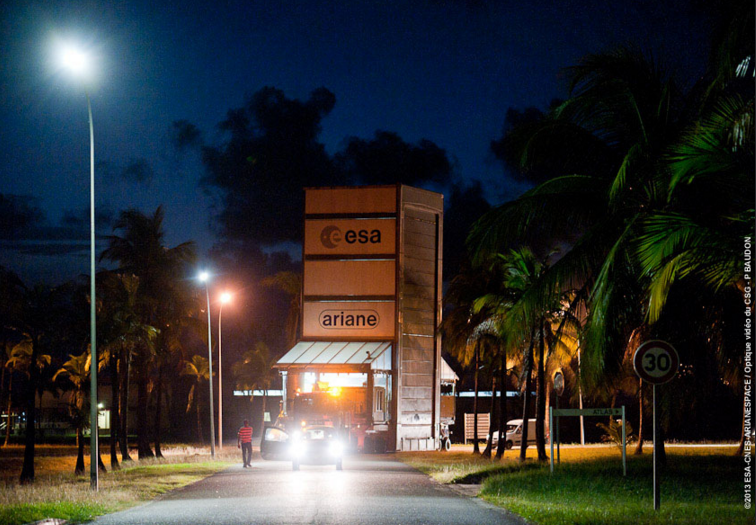 The Gaia satellite being moved between buildings in 2013. ESA.

Take the ESA’s Sentinel-3A satellite, which will monitor weather and climate changes when it’s launched into orbit in December. Sentinel was built at the Thales Alenia Space in Cannes, but it’ll be launched from Russia’s Plesetsk Cosmodrome—roughly 2,400 miles away.

On Friday, Sentinel-3A rolled out from its super-controlled cocoon in Cannes for an overnight journey to the Nice Airport, where it will be loaded onto a cargo plane and flown to Moscow so it can go through paperwork—yes, even satellites have to go through customs. After that, it’ll be loaded onto a rail car for a long, slow trip to Plesetsk, more than 600 miles away, the ESA explained.

So what’s protecting the precious cargo from all the perils of its plane, train, and automobile-born road trip? If you look closely at the ESA’s photos, you’ll see a white metal box covered by a tarp that looks roughly like a cargo container. 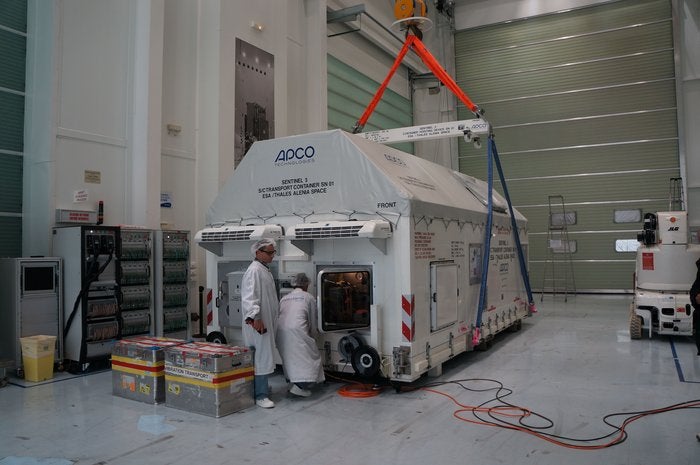 A cargo container isn’t too far off—these boxes are roughly the same size and serve a similar purpose, able to be transferred easily between railcars and truck beds. But they’re remarkably different in every other way.

One company that makes satellite containers, the aerospace hardware-maker RUAG, offers a dizzying array of features. Their containers can be fully pressurised. They can be “clean roomed.” They can be made so that every aspect of the interior environment, from moisture, to heat, to air quality, can be remotely controlled. (As early as 1992, NASA was working with private companies to develop controlled environments for its payloads.) 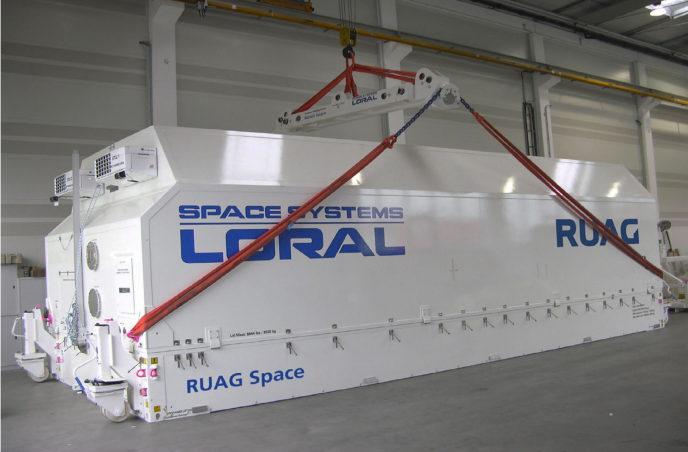 RUAG explains that pressurisation equipment is housed above the structure, carefully sealed around the roof. The box itself is usually aluminium alloy, but might include carbon fibre or stainless steel depending on the situation. The payload—the satellite—is protected from bumps and jolts (which are also carefully sensor-monitored) by a dampening system.

Basically, they’re hermetically-sealed worlds on wheels, more akin to the vacuum of space than our dirty, humid atmosphere.

Other companies, like the commercial satellite maker Arianespace, makes something called the CCU3: a rolling cleanroom for moving satellites that can dock directly to the cleanroom where a satellite was built using an airtight seal. “This container is effectively a self-contained cleanroom,” the ESA (which uses CCU3) explains. “It is air conditioned, the temperature, humidity and dust are controlled, and obviously it is waterproof. It is a large container, big enough to fit all kinds of satellites, including Envisat, one of the largest satellites ever built, or the ATV.”

To get a sense for how big a CCU3 is, check out this image of ESA engineers moving the satellite Gaia from a cleanroom into the container in 2013: 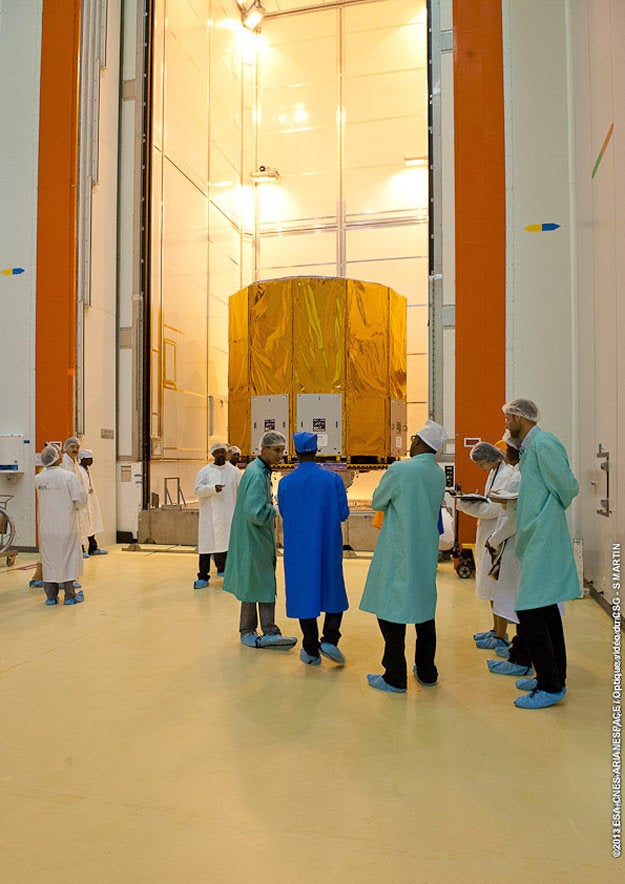 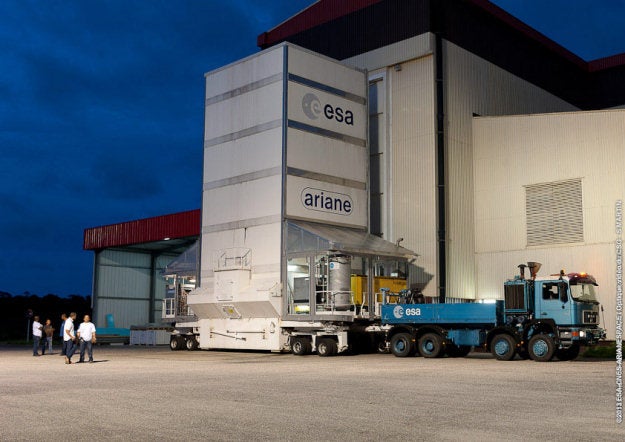 The containers usually move extraordinarily slowly—by necessity, at night—and can only be transported by the largest planes in the world. For example. the Sentinel-3A will hitch a ride on a hulking Antonov cargo plane. Meanwhile, NASA’s 57,000-pound Global Precipitation Measurement Satellite was flown to Japan in 2013 in the belly of one of the biggest mega-planes: a 5M Super Galaxy.

Still, some aspects of road tripping with a satellite remain recognisable: After all, bumper stickers are involved. The ESA’s Sentinel-3A launch date is set for next month.