There Are Finally Battle-Safe Foam Lightsabers That Actually Glow

In the world of Star Wars make-believe you usually have two choices: you can go with a realistic plastic glowing lightsaber, and never actually make contact with your opponent, or opt for safer foam, and battle it out without the glow. A new Kickstarter, however, promises the the best of both worlds.

Calimacil, a company well known for its high-quality foam live action role play weapons, has decided to use its expertise to create the ultimate light saber for LARPers, cosplayers, or really any Star Wars fan.

Foam lightsabers are the obvious weapon of choice when going into a pretend Sith vs. Jedi battle because you can whack away at your opponent with little worry about hurting them. Try that with one of those fancy glowing plastic lightsabers and you’re bound to hurt someone, and probably destroy your expensive collectible in the process.

Calimacil’s sabers are made of a special foam the company has developed that’s designed to take abuse without breaking or disintegrating. If you’ve ever had a pool noodle break apart in your hand while trying to use it as a sword, you’ll understand why this is important. But the company has further refined its foam recipe so that a core of LEDs will cause it brightly glow.

Calimacil has even gone so far as to develop its own motion sensing and sound effect hardware, which is built into the handles to give your swings and hits realistic sounds. The most expensive versions even offer smartphone connectivity and color-changing blades so you can customize your saber exactly how you want it. 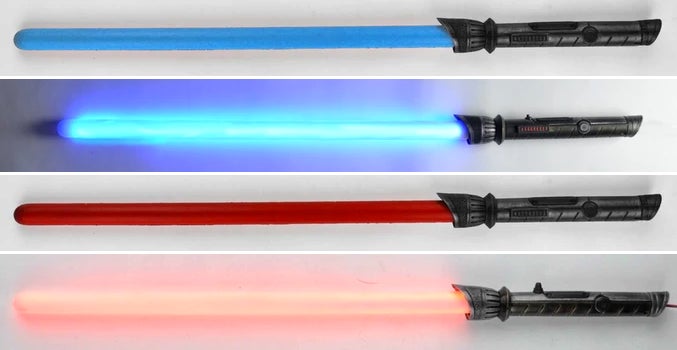 Multiple versions of the glowing foam lightsabers are available throughCalimacil’s $50,000 Kickstarter campaign, but the one you’ll most likely want is the Basic Plasma Blue or Red which can be pre-ordered with a contribution of $275/£183, and is expected to ship sometime in May of next year.

If you’re feeling extra spend-happy, though, the top-of-the-line Plasma model will cost you $500/£333, and give you all the features and the most detailed lightsaber handle. But even if it’s made of foam, do you really want to take half-a-grand worth of collectible into a mock battle? Probably not. [Kickstarter (Calimacil Foam Lightsaber) via Gadgetify viaTechnabob]