There Are Strange Hot Spots On Giza's Great Pyramid, And No One's Quite Sure Why

In late October, Egypt’s Ministry of Antiquities launched a project called Scan Pyramids that will use non-invasive technology to better understand the country’s largest pyramids. The first phase of the project was a simple infrared scan of the structures to get a sense for any thermal oddities that might be lurking inside their hulking masses.

This week, the ministry confirmed that those oddities abound.

At press conference in front of the Great Pyramid of Giza, a team of scientists from Cairo University, Nagoya University, Université Laval, the French Heritage Innovation and Preservation Institute announced what they’d discovered in the short first phase of the project. Using a (relatively) simple infrared scan, they imaged the surface of the pyramid at different times of day, both while it was cool from the night and warm from the day’s sun. 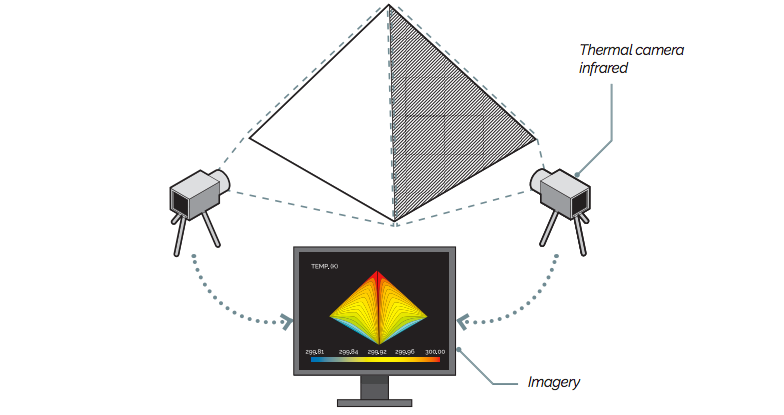 This scans showed something interesting: The first row of stones on one face of the pyramid were all the same temperature, except for three that were significantly warmer: Up to six degrees, in some cases. In a statement, the team reports:

Among the various identified thermal anomalies, the team has observed a particularly impressive one located on the Eastern side of of the Khufu Pyramid at the ground level; it is interesting to observe that while sometimes temperature differences of .1 to .5 degrees are detected between two adjacent stones from limestone of different qualities, the #ScanPyramids Infrared team has detected in this zone an area of few blocks, having up to 6 degrees gap with neighboring blocks.

The team has a few working theories about what could be causing the hotspots, with Egypt’s Minister of Antiquities saying that the heat spots suggest “void spaces, fissures or passages” that could even lead to a hidden tomb, the New York Times reports. In general, warmer or cooler areas imply air flow, which certainly could mean a hidden passage.

Meanwhile, the idea of the warmer areas has gotten a bit muddled online (Something is heating up inside Egypt’s ancient pyramids, The New York Post reports). But there are also far less glamorous explanations for these hotspots than whatever the Post is implying (possibly a sweet 4,500-year-old hot tub installed by Khufu).

For example Nevine El-Aref of Ahram Online, the English-language online version of Egypt’s Al-Ahram paper, talked to an independent expert who suggested the heat difference is due to something else entirely:

An Egyptian Egyptologist, who spoke to Ahram Online on condition of anonymity, said that nothing would be found behind the blocks except for fractures, as this is the “mother rock” of the plateau.

He said that when the ancient Egyptians built the pyramids, they inserted the blocks and the casing of the two first rows of the pyramids on the area’s mother rock.

A commenter on El-Aref’s post, who identified himself as the German Egyptologist Frank Müller-Römer, had another theory:

Stones for the making of the internal structure of the pyramid of Khufu were used from different quarries of the Giza plateau (Klemm & Klemm, in: The stones of The Pyramid, de Gruyter, Berlin 2010). In the statements during the press conference on November 9th details on an analysis of the stones with a higher temperature in comparison with the stones of the surroundings are missing. The differences in temperature also could be explained by material differences.

The so-called “mother rock” that the anonymous archaeologist mentioned? You can think of it as the bedrock—the foundation that serves as a base for the rest of the pyramid. It’s under an immense amount of pressure, and cracks or fissures could mean more air flow and different temperatures.

But this actually isn’t the first time the Great Pyramid’s mother rock has been the focus of archaeologists.

Back in 1995, a French engineer wanted to drill bore holes into the mother rock to “check on cracks that may be increasing the humidity inside the monument,” possibly “dissolving the limestone rocks and the gypsum mortar that holds them together,” the Christian Science Monitor reported that year. It’s unclear whether he was successful, though he did drill holes elsewhere on the pyramid.

Either way, the project enraged many archaeologists who argued the work caused more harm than it could possibly help repair–and even leveled accusations that this “conservation” work was just a thinly-veiled search for secret passageways and chambers. In fact, the whole ScanPyramids project is in some ways a reaction to these invasive efforts.

In the end, it’s still very unclear what these hot spots mean. The project’s next step is to investigate these anomalies with other technology–like muon tomography–and if we’re lucky, soon we’ll be looking inside the pyramid ourselves, no drills required. [Ahram Online]