As WWII heated up, England’s Special Operations Executive put all of its secret spy training collective tradecraft knowledge into a single training manual. And, it turns out that training spies to operate behind enemy lines is often good training for going outdoors, too.

The abridged history of this manual is that, as America’s participation in WWII became more and more inevitable, the British and American militaries identified the need to train a corps of spies who could operate behind enemy lines, leading groups of partisans, or conducting their own intelligence gathering or sabotage. Spying, as it’s understood in the modern context, was a very limited profession at the time, so a method had to be found to impart the knowledge of a few to many students, across multiple training camps. That was achieved in part by enlisting specialists to train students in specific skills, and these camps had incredibly high instructor-to-student ratios as a result. But, the basic program and its knowledge base also had to be written down. So, the SOE did just that, creating its own training syllabus.

The best surviving copy of that syllabus happens to be the one used at Special Training School 103, or “Camp X” which opened to train American spies two days before Japan bombed Pearl Harbour. It now resides in the United Kingdom’s National Archives in Kew. Quotes from it are used in this article.

The pre-war approach of Camp X scaled quickly as America went to war. While only 760 Americans ever received the training detailed in this manual, it formed the basis for the training program implemented by America’s new Central Intelligence Agency when that was formed the next year.

That original manual was unearthed by Denis Rigden, and is re-printed in its entirety in his book, “How To Be A Spy.”

What makes it particularly interesting to outdoors types is that this knowledge is drawn from a time before modern technology invaded the battlefield. A time before exploding cigars or microfilm cameras or night vision goggles. Its shared knowledge is what proved successful in the field, during wartime and its presentation here is ruthlessly efficient. It’s not politically correct or the kind of advice that’s been run past lawyer’s to absolve its authors of liability. It’s what enabled early spies to parachute into enemy held territory, blow shit up, then make their escape.

Let’s go through the manual, pull out the knowledge that’s applicable to hikers, sportsmen and nature lovers and discuss how it’s still relevant to us in the modern world.

This is as true of climbing, hunting or simply crossing challenging terrain or dealing with a dangerous situation as it is plotting enemy movements. The syllabus also emphasises the importance of ensuring your information is up to date. A detailed assessment achieved the day before is invaluable for forward planning, but take some time to ensure that what you saw before remains the case before you move. 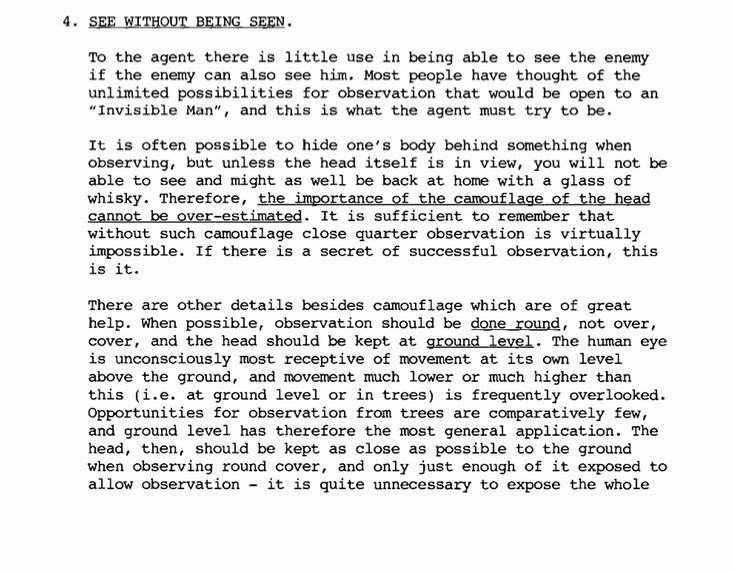 Not just for hunters. Anyone who wants to observe wildlife or who may need to ascertain the motives of a strange group of people in the middle of nowhere can benefit from these general practices. And, the syllabus emphasises that you can quickly adopt the principles of camouflage on the fly by using terrain or brush to mask your silhouette. It also identifies motion as the thing that will give you away. Simply remaining still will prevent people or animals from detecting you nine times out of ten. 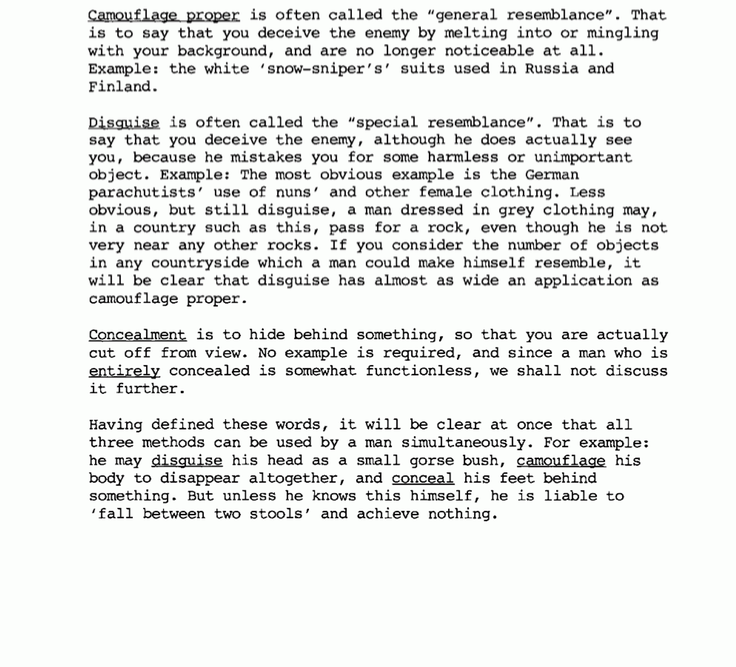 Understand the different kinds of camouflage, as defined by the syllabus, is key to successfully hiding from observation. This is a great example of how these different types can be used together, enabling you to totally disappear into your environment while remaining ready to act. 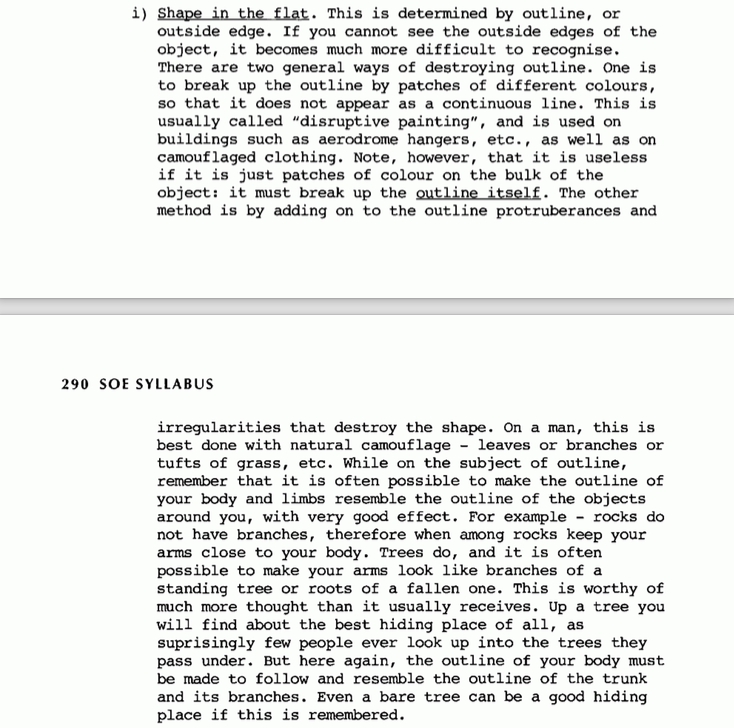 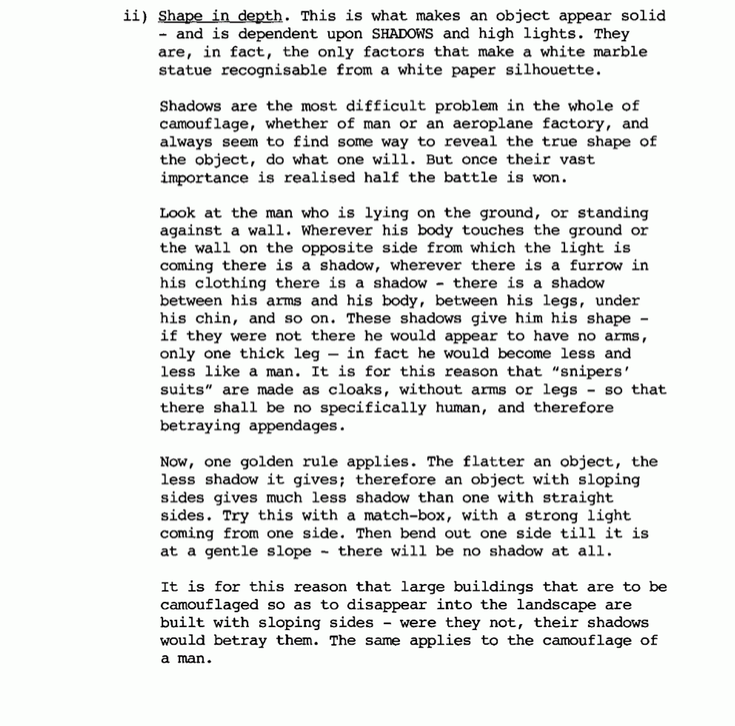 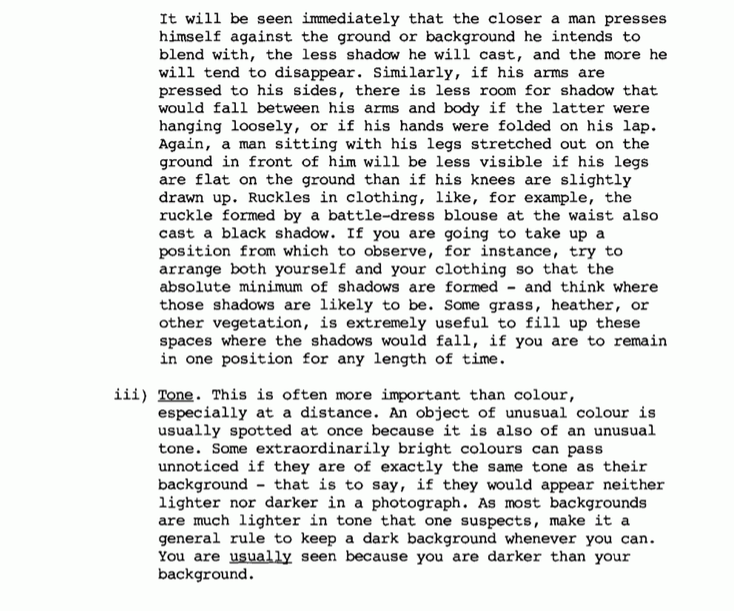 After those are achieved, worry about making your outline with disruptive patterns, eliminate your shadow by pressing yourself closely to the ground or an object, then consider the overall tone of your background and attempt to match it. 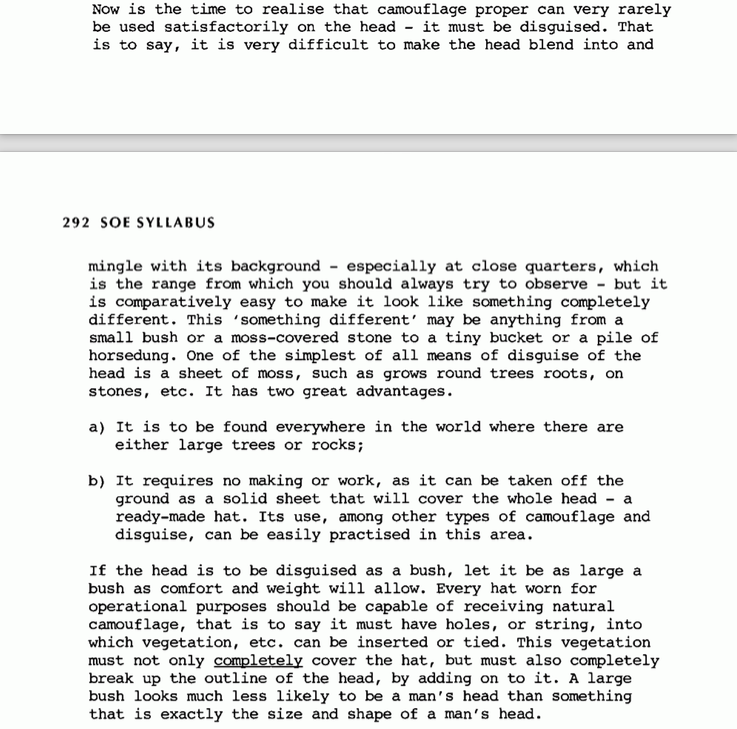 The syllabus goes onto recommend you cover yourself in natural vegetation to achieve the above goals, but cautions against using this method in hot sun as the plucked branches and whatnot will quickly wither and become, “worse than useless.” 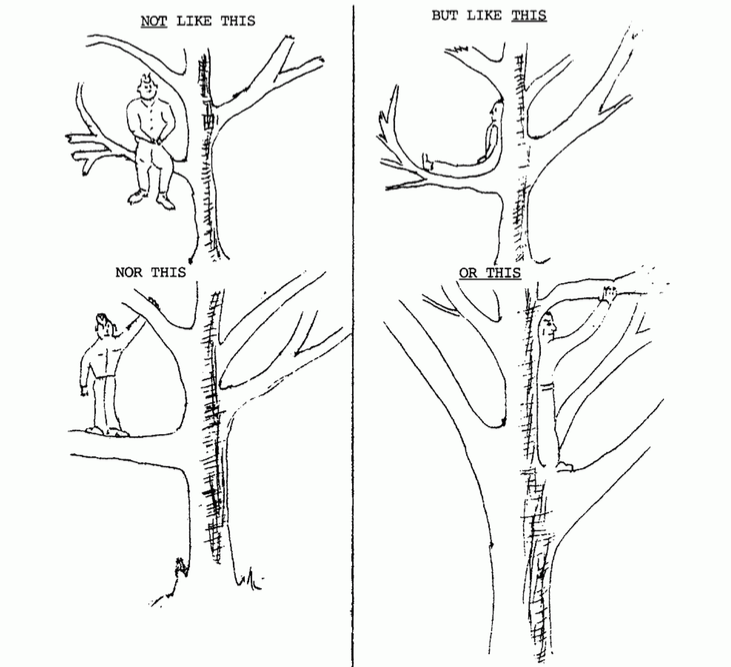 Using natural features, vegetation or manmade materials to mask your silhouette is an easy, immediate way to disguise yourself.

This is as good a description of what binoculars do as I’ve seen. 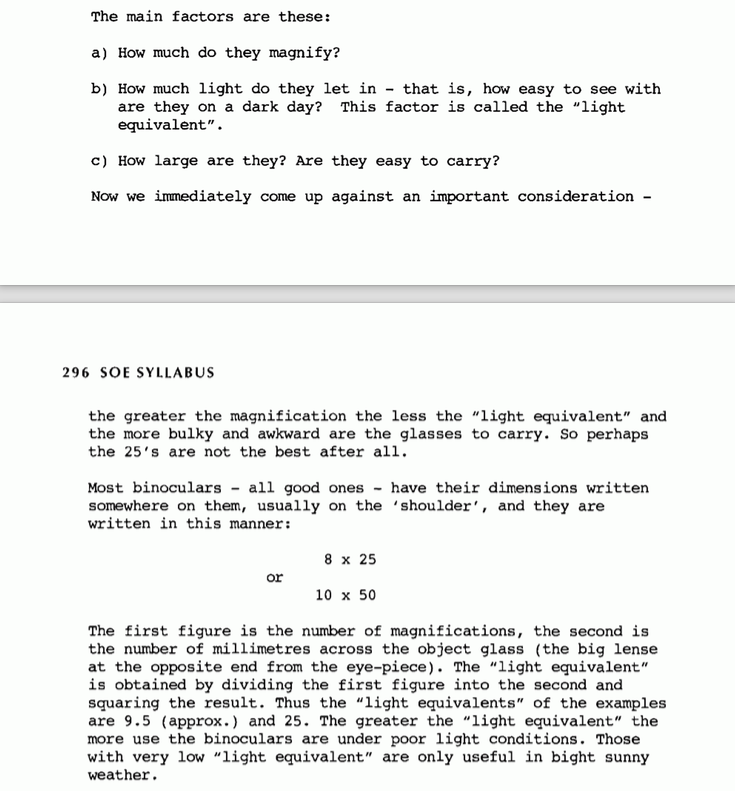 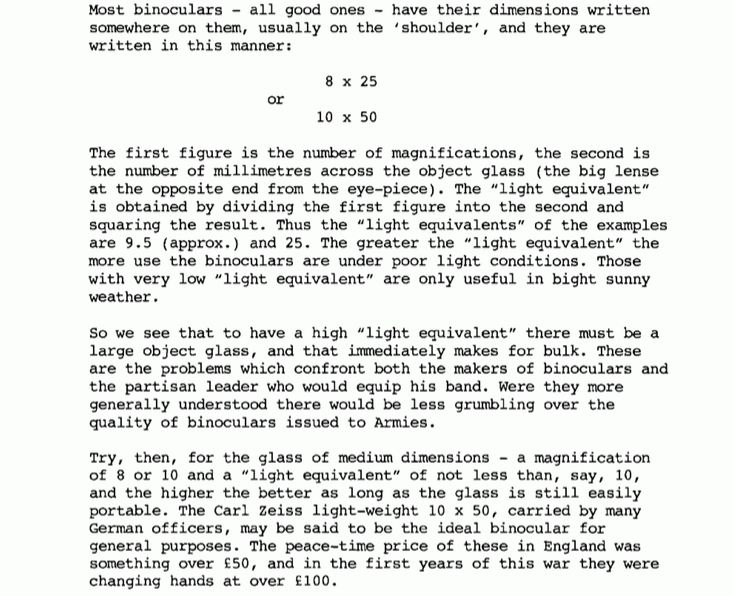 And, the syllabus includes basic binocular buying advice that is still relevant today. 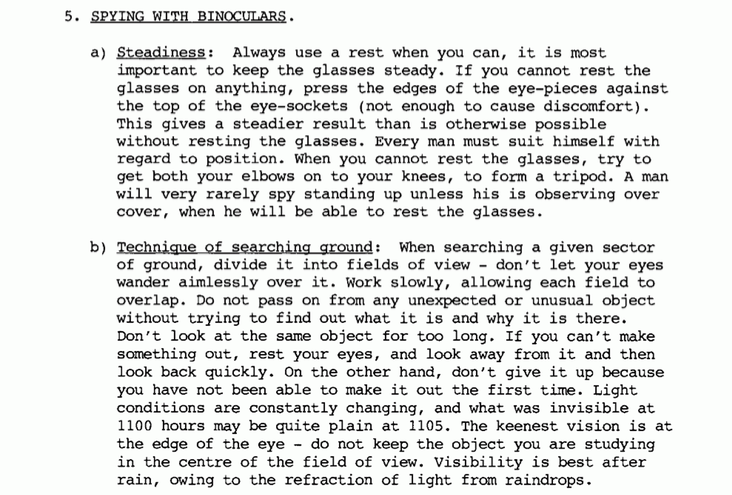 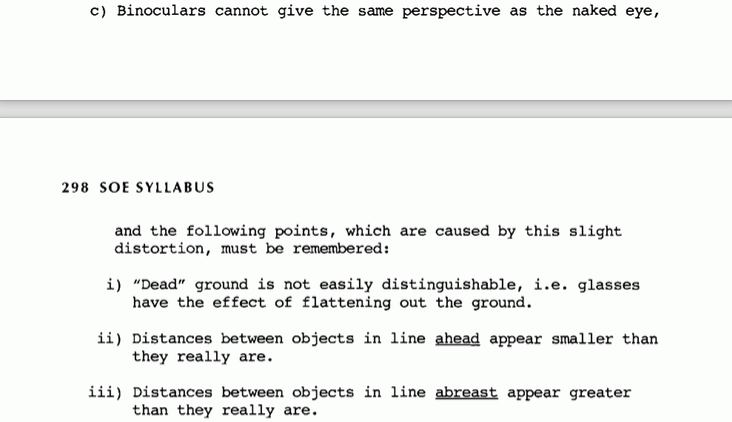 This remains the basic principle for carrying less weight outdoors. Know what you need and take only that. 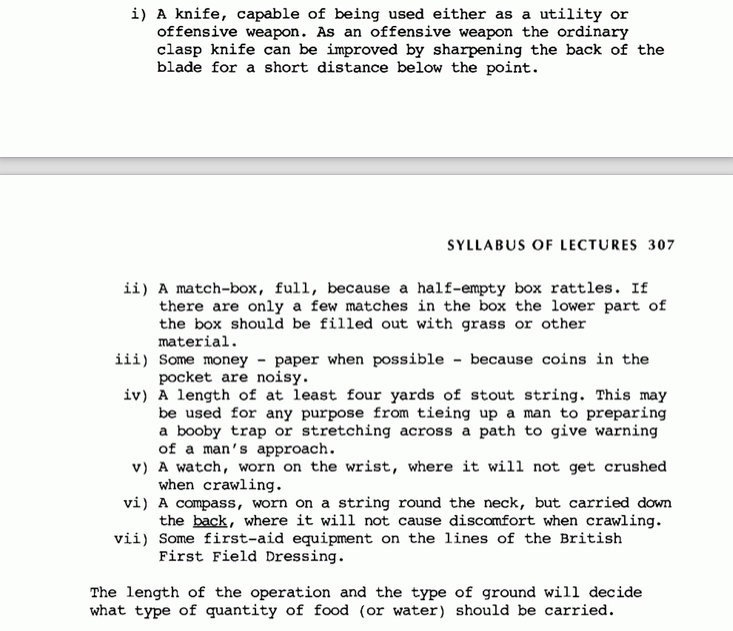 And aside from clothing, here’s their packing list. Don’t need much more than that!

Need to move undetected? This is one of the best descriptions of how to do that I’ve ever seen. 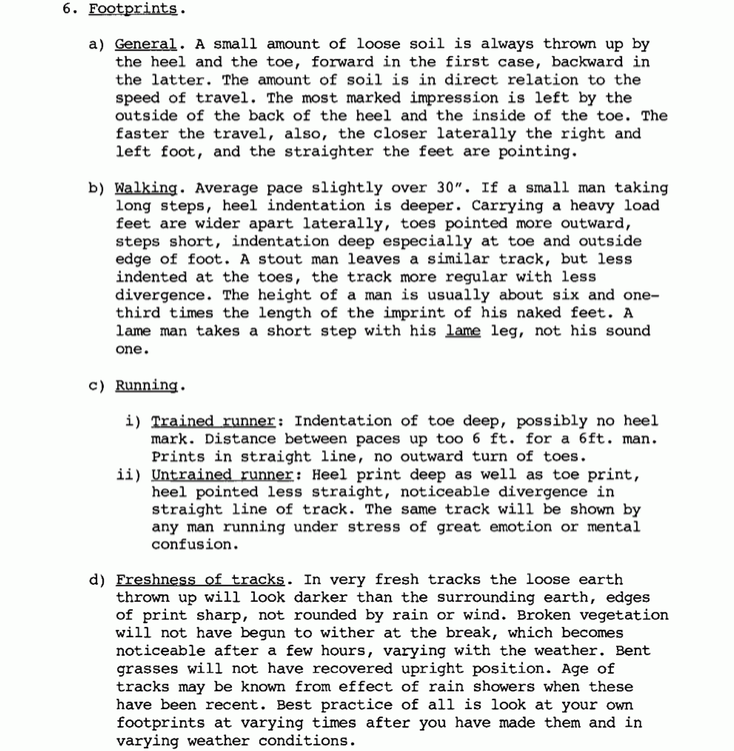 The syllabus going into the importance of reading animal movements at length. I’ll spare you the couple hundred words by simply saying: become familiar with the behaviour of birds and other small animals in your area, they’re frequently a dead giveaway to the presence of humans or large predators. 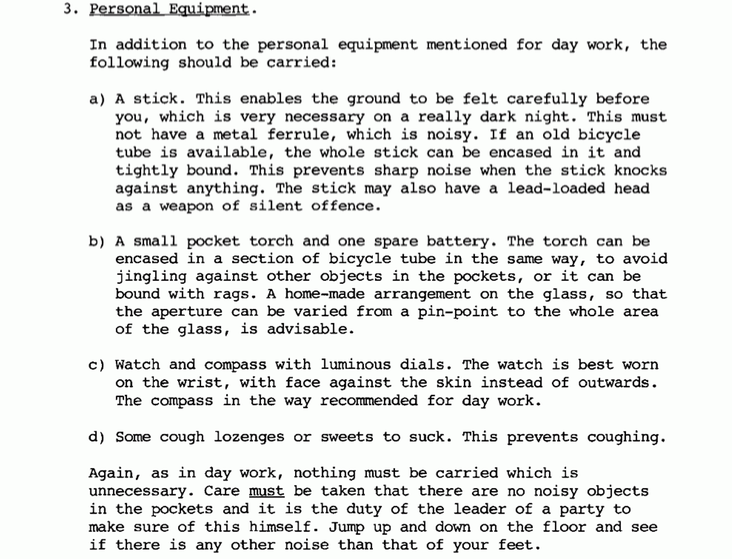 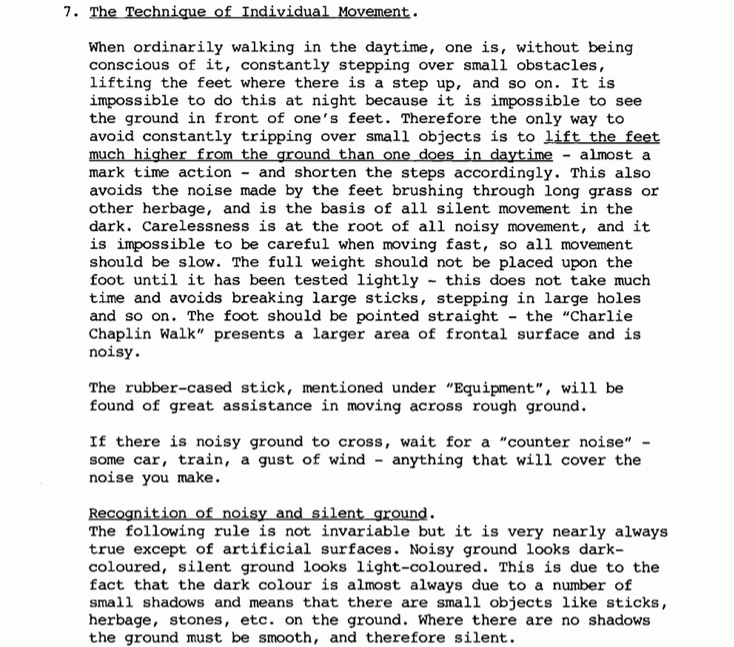 How To See In The Dark

I didn’t know that! I’m going to go pull out all my binoculars and see which ones should work, then give it a try.

Crossing moving water is dangerous. But probably less dangerous than jumping between wet rocks. The potential for a fall injuring you or knocking you unconscious, then dumping you into moving water, just has very serious ramifications. Any river crossings need to be calculated, planned and conducted with extreme care. 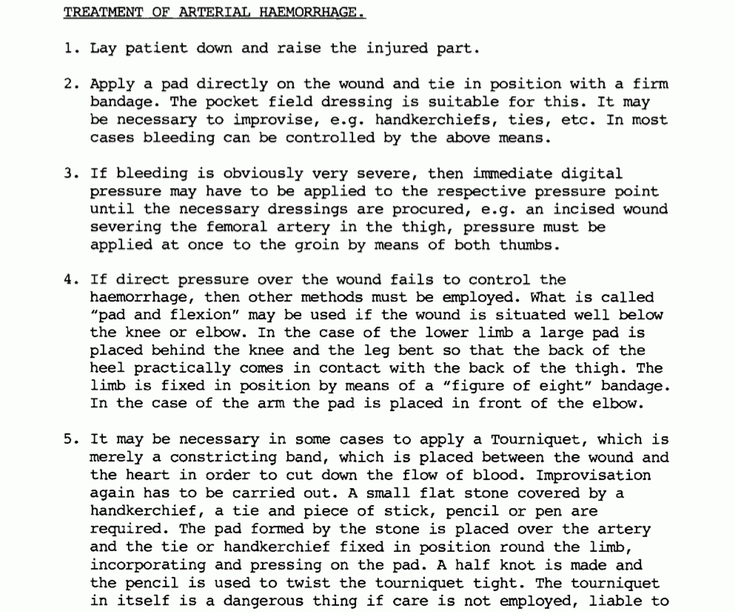 The priority in any first aid situation is to first assess the person’s airway, breathing, and circulation. Understandably, the syllabus deals mostly with injuries causing blood loss.

Tourniquets are a controversial first aid technique and should not be attempted without training.

The syllabus goes into much more detail, but it’s largely oriented around killing, so we won’t reprint that here.

How Can The SOE Syllabus Help You?

A lot of this stuff, like the camouflage or silent movement techniques, may at first seem overwhelming. The title of this paper is a giveaway though. As a syllabus, it’s an overview of training, not the complete package. The concepts and techniques identified would have been taught and practiced in classes. And you can do pretty much the same thing, applying what you read about here to your next outdoors adventures.

A nighttime dog walk, for instance, is a great time to practice your night vision techniques. A hike is a great time to practice silent moving. Basic camouflage can be applied any time you’re outside, simply by dressing in earth tones and using natural features to disguise your silhouette. Work up to it, then find a deer or other wary animal and try to sneak up on it. I bet you’ll be surprised at not only how achievable that can be, but how effective all this stuff combined is at improving your experience outside. Minimising your presence outdoors is the best way to observe nature.