The idea of streets swarming with robot-piloted vehicles paints a scary picture for some urban-dwellers. But a new project called FutureNYC helps to showcase all the positive ways that autonomy will benefit New Yorkers by highlighting what residents will get back when our cars can drive themselves.

FutureNYC is the brainchild of designers Ari Teman and Elliot Glassman, who created these images showing autonomous cars navigating through safer crosswalks and down avenues transformed into parks. The idea is to illustrate that you’re not “giving up” independence to robot drivers, says Teman. “It focuses on what New Yorkers gain, rather than what they think they’d lose.”

In Teman and Glassman’s future, self-driving cars will not only be safer but also smaller and more efficient. Also, since you can summon a car to pick you up at any time, a city won’t need so much space to be devoted to parking. I’ve written before that cities need to start reducing the amount of real estate allocated to all vehicles right now—Teman and Glassman estimate 90 per cent of NYC’s streets can be devoted to pedestrians.

It’s important to note that these aren’t benefits that will only come from a switch to autonomous vehicles. These kinds of streets would be perfect for a city that’s focused on reducing any vehicular traffic, say through congestion pricing or a personal car ban. In fact, these changes are already happening in many places. As Teman notes, every one of these concepts has already been rolled out successfully in various other cities around the world. But having it happen on the scale of someplace like New York would be truly revolutionary. Here are some things to look forward to.

Pedestrians and Cyclists Are Safer

Since autonomous cars won’t need as much space to turn or stop, intersections can hand over more space to walkers and bikers in the form of wider crossings and dedicated lanes. And since visibility won’t really be an issue, additional pedestrian improvements like shade structures and covered walkways can be added.

Deliveries Only Happen at Night

One of the best parts about autonomy is that deliveries can happen at non-peak times. So say goodbye to trucks idling outside businesses or on busy streets! Robots can not only deliver goods but also handle the heavy lifting, leaving packages in secure drop spots for businesses.

Not only will on-street parking be a thing of the past, cities can start to convert these spaces into better uses for residents like bike parking and playgrounds. Former car infrastructure can also help generate economic viability. A parking garage could be turned into a school, for example.

Better Accessibility for Those With Disabilities 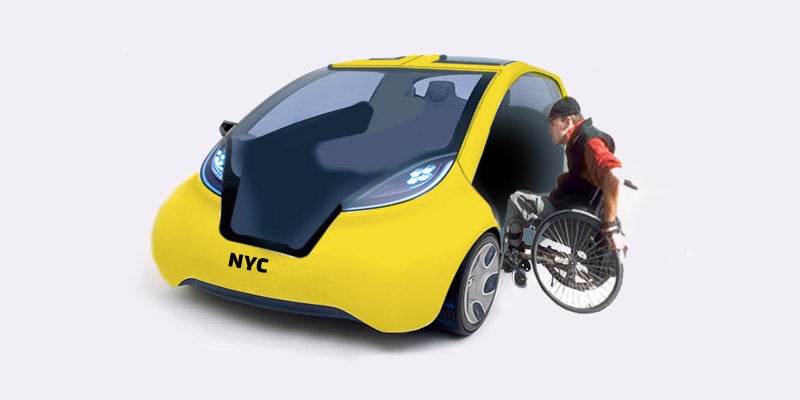 It will be even easier for the elderly and disabled to get around using autonomous taxis. Plus, since streets won’t need curbs anymore to separate human drivers from walkers (a-ha!), it will be easier to cross streets.

Many first-responders are delayed by human drivers who don’t get out of the way. Autonomous vehicles will not only clear a path for emergency vehicles, they won’t need loud sirens to get the attention of drivers. A simple strip of LED lighting will do.

Reduced Travel Times For All

Think of an entire city running on Waze. Cars will be able to coordinate with each other, re-routing on the fly to avoid heavy vehicular flow on certain streets. Traffic will be a thing of the past and people will get to their destinations faster.

Swapping asphalt for grass will have an incredible number of health benefits for residents. Streets will become oases in the city. Which sounds like an absolute dream—and not an impossible one, either. [FutureNYC]