Eighty-five people are still unaccounted for a day after a bizarre landslide struck the southern Chinese city of Shenzhen. Experts say the landslide was not a natural disaster, but rather a human-made catastrophe triggered by the excessive piling of industrial waste.

Aerial drone images showed large swaths of red mud piled on top of crushed buildings Chunks of concrete, steel, and glass can be seen strewn across a vast area. Mobile phone footage captured the moment the landslide ploughed through the city like a tsunami.

One harrowing video shows an entire building collapsing under the weight of the mud and debris:

The landslide, which struck yesterday morning, hit 33 buildings in Shenzhen, a highly populated boomtown that’s located across the mainland border from Hong Kong. Back in the 1980s, Shenzhen was a small fishing village, but like other Chinese towns in the special economic zone, it was quickly developed and converted into a bustling city.

The debris field from the disaster covers a vast area measuring 455,000 square yards. In addition to destroying buildings, the landslide also caused a natural gas pipeline to explode. 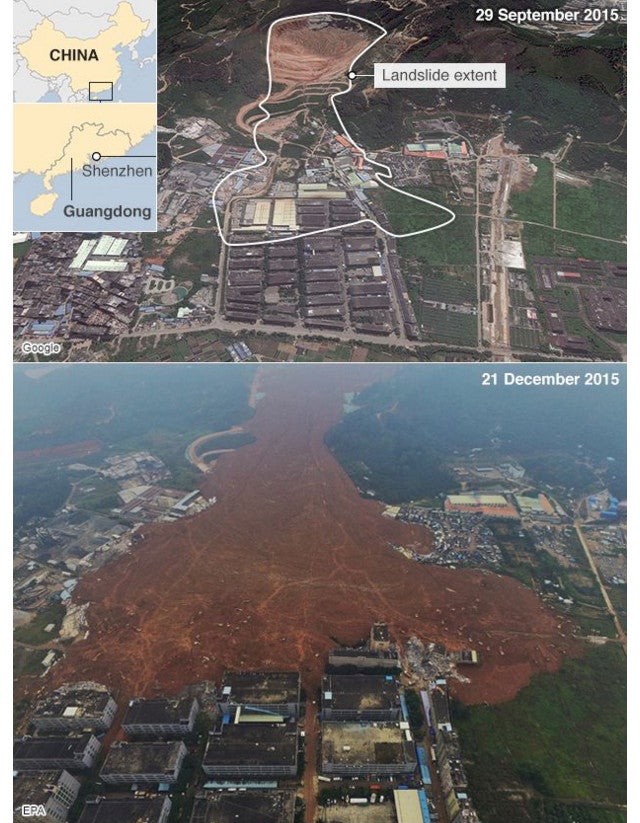 In the minutes and hours following the landslide, seven people were pulled from the rubble with minor injuries. The mud is up to 32 feet thick in some places, making rescue attempts difficult. Hundreds of rescuers are feverishly looking for anyone who might have survived.

Officials say the construction debris, which had been piling up on a steep hillside for two years, had loosened following heavy rain. The 330-foot-high hill contained excavated soil, bits of cement, and other construction waste.

“Because the mound was very large, and the angle of its slope was overly steep, this led to it losing stability and collapsing,” noted China’s Land and Resources Ministry in a BBC article.

The Chinese premier has now ordered an investigation. The landslide comes just four months after a series of huge explosions at a warehouse filled with chemicals in Tianjin killed at least 50 people. Rapid industrialisation, along with weak industrial safety and zoning laws, are cited as among the major causes of both disasters.