Could There Be Massive Planets in the Far Reaches of Our Solar System?

A pair of new studies claim to have discovered two of the most distant objects ever seen in the outer reaches of the Solar System, including a “Super Earth” located six times further away than Pluto. It’s an extraordinary claim — and it’s also highly unlikely.

Before we dive in, it’s important to point out that neither study has gone through peer review, though both papers have been submitted to Astronomy & Astrophysics. The studies have already received considerable attention, however, owing to their remarkable claims.

Research groups from Sweden and Mexico analysed data collected by the Atacama Large millimeter/submillimeter array (ALMA) in Chile. They were looking at a distant star called W Aquilae (or W Aql), and the nearby star Alpha Centauri. Remarkably enough, the researchers were looking for objects outside our Solar System, but they ended up (potentially) discovering objects much closer to home.

Of Centaurs and Brown Dwarfs

In the W Aql study, the astronomers pinpointed a potential object in March 2014 and then again in April. They say it’s probably a single object, one located in the outer reaches of the Solar System.

“Until the nature of the source becomes clear, we have named it Gna,” write the authors in the study. “Unless there are yet unknown, but significant, issues with ALMA observations, we have detected a previously unknown objects [sic] in our solar system.”

Estimates place the apparent object between 12 to 25 AU (where 1 AU = average distance of Earth to the Sun), with a size of about 220 to 880 km (136 to 545 miles). Such a conclusion would hardly be surprising as there are literally millions of icy objects at that distance. As Paul Gilster notes at Centauri Dreams, Gna is probably a Centaur in retrograde orbit, a Centaur being a minor planet at the edge of the Solar System, not unlike Pluto and its companion, Eris.

But these estimates only apply if it’s gravitationally bound. In the event that it’s “unbound”, the astronomers say it could be a “much larger, planet-sized object” located within 4,000 AU (whoa!), or even beyond to about 0.3 parsecs, which is about 61,900 AU (even more whoa!). For comparison, Pluto is located 34 AU from Earth. So if this supposed object exists, it’s far in the outer reaches of the Solar System.

“[The] most exciting possibility is that we have observed a planetary body or brown dwarf in the outer reaches of the Oort cloud,” write the authors. The presence of a brown dwarf — an object too big to be a true planet, but too small to be a star — would truly be a remarkable thing.

More observations will be required to confirm this one way or another; the astronomers are working with precious little data. 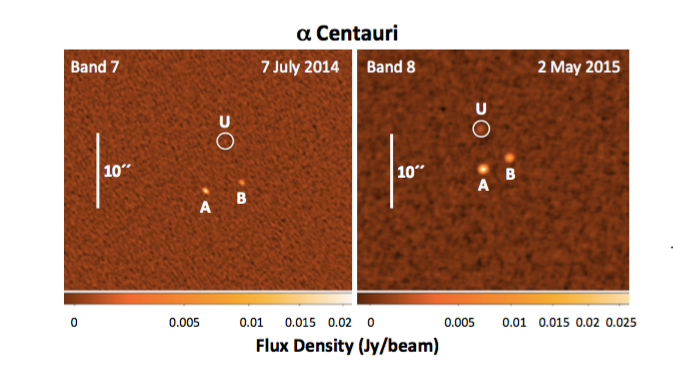 Which now brings us to the second study, which is a equally as interesting, though a bit more controversial.

A different set of observations made by the same research team indicates the presence of an object that appears to share the same motion as Alpha Centauri A and B. But this probably isn’t another star in the Alpha Cen system because it’s far too bright. Rather, the authors conjecture that it’s one of three possible things: (1) a small, icy Trans Neptunian Object (TNO) at a distance of 100 AU, (2) a Super Earth located 300 AU away, or (3) a super-cool brown dwarf located at a distance of about 20,000 AU. Again, wow.

Neat, But Not Likely

Bad Astronomer Phil Plait says that an icy body at the distance of Neptune isn’t a big stretch, but as for the other possibilities, they’re “far less likely”. He says the discovery of such an object is grossly improbable, and asks us to think of it this way:

If they did find a planet looking at such a small piece of sky, it would imply that it’s likely the sky is full of such objects! That removes the coincidence; there are so many you were bound to find one.

But if true, that would mean there are hundreds of thousands of such objects in the solar system. More! That makes a planet-sized object pretty unlikely, to say the least. I might believe that it could be one of many smaller (several hundred km in diameter) chunks of ice way past Neptune because those are common. But even then it’s still unlikely given these circumstances.

Similarly, Eric Berger from Ars Technica points to a series of Tweets from Mike Brown, a planetary scientist at California Institute of Technology:

Jonathan McDowell, an astronomer with the Harvard-Smithsonian Center for Astrophysics, says it’s much too early to get excited.

“It’s a considerable stretch to make the claim of an outer solar system object at this stage,” he told Gizmodo. “Maybe there is a large faint population of variable obscured quasars that’s combining in some weird way with ALMA instrumental issues, or — who knows.”

McDowell suspects it may be a classic case of ‘we should have waited for the referees’ report before going on arXiv.’

Indeed, you can find both studies at the pre-print arXiv: “The serendipitous discovery of a possible new solar system object with ALMA” and “A new submm source within a few arcseconds of α Centauri: ALMA discovers the most distant object of the solar system.” Both papers have been submitted to Astronomy & Astrophysics for peer review.