Think you’re the biggest Star Wars fan in our neck of the galaxy? Here’s your chance to prove it once and for all, because only the most loyal of Star Wars devotees will be willing to spend just shy of £16,800 for a lightsaber fountain pen and a nifty floating display stand.

What could possibly justify that obscene price tag? For starters, just eight of these pens are being produced in either a Darth Vader or Yoda saber design. Made from bronze with “black lacquer with palladium and rhodium finishes” the pens also each feature red or green topaz crystals on the ends of their caps to represent the lightsabers’ red or green blades. 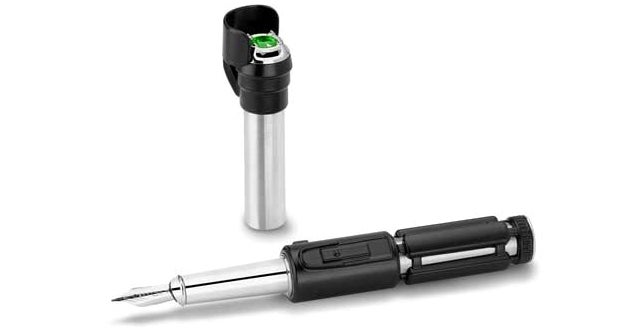 But penmaker S.T. Dupont Paris has obviously realized that this isn’t the first lightsaber-shaped pen that Star Wars fans can get their hands on. So to sweeten the pot the company has also created an accompanying floating display stand that relies on the earthly sorcery known as magnets, instead of the Force.

There’s no question this would make for a sweet addition to any Star Wars collection, and a pretty slick conversation starter for your desk at work. But that price tag might mean your kids will have to settle for no birthday or Christmas presents for the rest of their lives, but we’re sure they’ll understand. [Wheelers via Coolest Gadgets]