The Project To Monitor At-Risk Infrastructure From Space Is Growing

A few months ago, the European Space Agency and the University of Nottingham described a new project that would use satellites to monitor ageing, at-risk piece of infrastructure was at a given moment, right down to the centimetre. Now, more countries want in.

Today Global Construction Review reports that the ESA project is in the process of securing a cash infusion to the tune of $650,000 from a new source: The China Railway Group, which is interested in using the technology to monitor the health of its bridges from space. China has seen an explosion of new bridge and infrastructure projects over the past few decades–to say nothing of the railways, bridges, and motorways it’s building across Africa and Latin America. A tool that would let the group monitor those investments from afar would be priceless.

The technology itself, GeoSHM, operates a little bit like the GPS you use in your car. A particular bridge master will install a series of sensors around the bridge in question, which provide feedback on a micro level about how much a bridge is deforming at a given moment thanks to GPS technology–or how much it’s deforming over many months or years. At the same time, targeted satellite imagery tracks soil conditions around the bridge, measuring changes in soil conditions that could warn of critical problems below the surface. 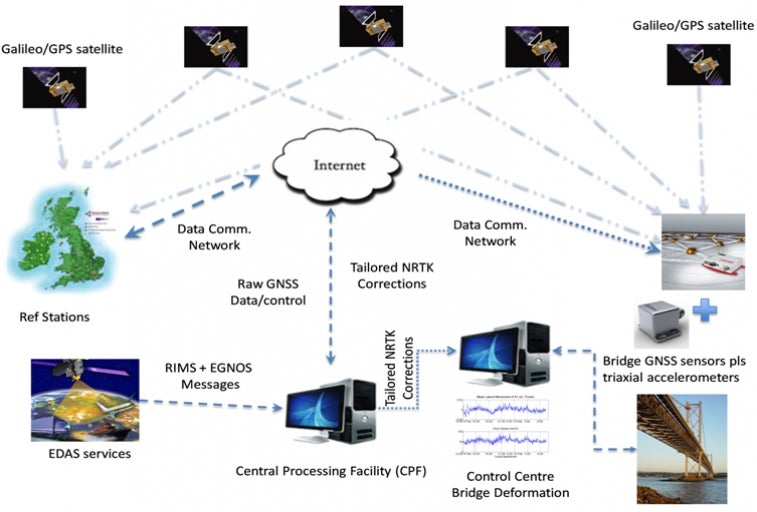 Stakeholders on the development of the project so far include bridges in the UK like Humber Bridge, seen above, as well as the Yangtze River Bridge in China. According to the ESA, GeoSHM already identified two bridges in China that had these soil issues:

EO data have proved to be extremely useful and confirm that over the years there are no significant movements on the supporting towers and surrounding areas. When analysed in China, EO images have shown ground subsidence around bridge sites located in two mega cities – Shanghai and Wuhan in China, that was caused by the underground engineering and water extractions.

It makes a lot of sense for the China Railway Group to be investing in the technology: As one of the largest infrastructure companies in the country, it’s building huge amounts of infrastructure all over the world, from a 290-mile-long railroad in Venezuela to billion-dollar development projects in Zimbabwe.

It’s easy to imagine tiny swarms satellite-linked sensors colonising all kinds of other physical systems in our world, too, from high-rises to subway tunnels. For now, it’ll be interesting to see how this novel tech will evolve now that a major infrastructure player is getting involved.