As the world warms, we lose arable land to grow the food we all need to survive. But although our changing climate is one big problem our food supply faces, it’s certainly not the only one—and even fixing the effects of climate change might not generate enough food to feed future generations.

“There are 795 million people who are chronically hungry,” said Tanya Edlington from Care, in a panel discussion at the Paris climate talks yesterday. “But we’re already using 1.5 times our planetary resources every year.” She’s referring to the planet’s bio-capacity—the amount of land and sea we can use year-on-year that’s also able to regenerate to its full productivity at the same time. That overuse of the world’s resources is already creating some headaches, with 33 per cent of the planet’s land suffering from desertification. Earth is losing 19,000 square miles of soil every year.

Climate change is making matters worse. Over the past 30 years, changes in temperature and rainfall are thought to have caused a decrease of between 1 and 5 per cent in agricultural production, according to a report by Care. But it looks set to get worse: the Intergovernmental Panel on Climate Change (IPCC)—the group of scientists that assess climate research—notes that “regional to global-scale projected decreases in soil moisture and increased agricultural drought are likely in presently dry regions by the end of this century.”

It’s not just limited to the quantity of the food we produce. The IPCC notes that “all aspects of food security are potentially affected by climate change, including food access, utilisation, and price stability,” even adding that the “nutritional quality of food and fodder, including protein and micronutrients, is negatively affected by elevated CO2.” (It does, however, cede that this last bit “may be counteracted by effects of other aspects of climate change.”) 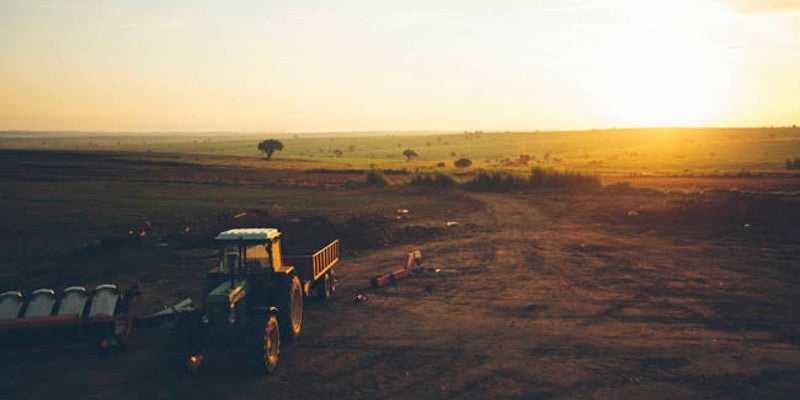 No room to grow?

Yet it’s not clear that simply solving climate change by any means necessary would help. Teresa Anderson from Action Aid points out that many of the suggestions being made to decarbonise our atmosphere boil down to making use of nature’s own carbon eaters. The idea is simple: grow large swaths of trees or plants which absorb carbon dioxide to live, allow them to just reach maturity, cut ‘em down, then burn them—but capture the carbon as you do so, and then bury it. You get heat from burning the wood, and suck CO2 out of the air at the same time.

It’s a lovely plan, and even the IPCC buys into it. But if you look at the numbers, it is unclear how much space those forests might require. Michael Hayes from National Drought Mitigation Center at the University of Nebraska–Lincoln reckons that 150 million hectares could supplant all of our fossil fuel use. Anderson claims that the IPCC figures give a result nearer 500 million, or upwards of 1 billion if you make some pessimistic assumptions. Those numbers are still large, however you slice it—the total area of the U.S. is just shy of 1 billion hectares.

If desertification and over-use of resources continues, there will be a decreasing total area of land to farm, argues Anderson, which will be pinched still further by the need for planting trees and other vegetation for carbon capture. That suggests it may be wise to reclaim some of the land that’s either been adversely affected by climate change or farmed into the, ahem, ground.

There’s another compelling reason to make the land work once more, too—because the other option is migration. “For communities who are leaving their lands, social structure, culture and livelihood — that’s a disaster,” said Anderson.

Making land work once more isn’t easy, but it’s certainly achievable. In the most extreme cases, it can require serious infrastructure. For instance, in Gambia many of the lowland fields have been regularly exposed to floods from saltwater parts of the River Gambia; over time, that left the soil too saline to grow crops. A series of dykes and spillways were recently built, allowing residents to build up fresh water supplies that could be used to flush the fields until they were suitable for growing crops once more. But the dykes are expensive—that project cost the African Development Fund £2.6 million.

It can be done more cheaply. Simpler interventions—including agroecology, named because it blends the scientific thought processes of ecology with the aims of agriculture—will suffice. This might involve bringing soils back to life with organic fertilizers; growing specific crops, such as beans, to fix nutrients in the soil; or using new breeds of crops that are more tolerant to drought in the first place.

Other simple interventions include training farmers to mulch their own composts, or providing developing countries with better meteorological data. The latter strategy also requires ensuring that information is delivered to locals in language they will understand, so they know when it’s the best time to sow their seed.

These are all solutions to help make an already warming world productive for agriculture. Any approaches to mitigate climate change decided upon in Paris ought to bear in mind the potential impact on food security. If they do, we stand a chance at feeding the world; if they don’t, we may struggle to grow enough food to survive.