There Are Twelve Different Kinds of Rainbows

The science of rainbows: it’s something we’re all taught at primary school. Airborne water droplets act like little prisms, bending and splitting light. Mix enough water and sunshine, and you get a brilliant bow of colour. The reality is quite a bit more complicated.

Some rainbows have a second, inverted bow, caused by the reflection of light off the primary. Occasionally, we’ll see a darker band of sky between the two arcs. Sometimes, we even witness bright fringes—so called “supernumerary bows”—on the top and bottom of the rainbow.

And when the sun draws low in the sky, rainbows start to lose colours. As light travels a longer distance through the atmosphere to reach your eyes, the shorter wavelengths get scattered away. Eventually, we’re left with nothing but a lovely red smear. 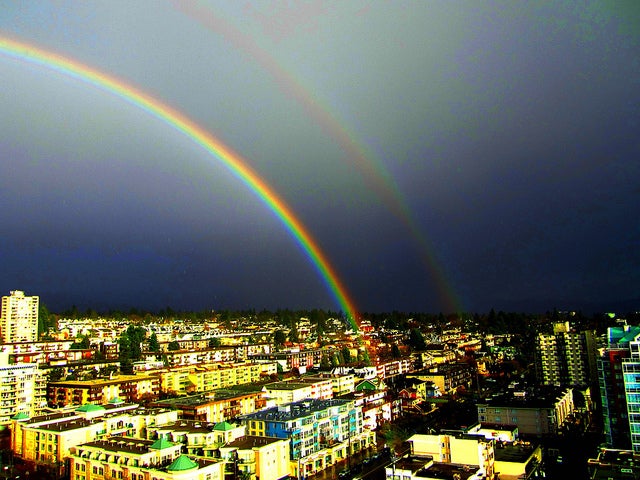 A brilliant double rainbow after a rainstorm. Image via Peggy/Flickr

For decades, rainbows have been classified in textbooks based on the average size of their water droplets. But water droplet size alone can’t explain the diversity of rainbows we see in nature.

By sorting hundreds of pictures of rainbows based on the visibility of the six colours and the presence of accessory bands, a team of atmospheric scientists has now come up with 12 different classes—including a rainbow that lacks green, a red-and-blue-only rainbow, a yellow and orange/red rainbow, and a monochromatic red. They presented their findings at the American Geophysical Union meeting this week.

So, if you’re ever lucky enough to spot a strange, partially-coloured rainbow, there’s now a classification scheme that’ll tell you exactly what’s going on. Diffuse red rainbows, for instance, only occur near sunrise or sunset, when the sky is filled with tiny water droplets.

As with many other natural phenomena, the truth about rainbows is turning out to be far more beautiful than we imagined.