This is How the Ocean Makes Earth Liveable

Seventy percent of Earth’s surface is ocean, and without it, the other 30 per cent would barely be inhabitable. The ocean absorbs and distributes heat around the globe, and it acts as a planet-sized CO2 scrubber, saving us all from a runaway greenhouse effect like the one that turned Venus into a hell-world. But the ocean, like the rest of Earth’s climate system, is changing — and not for the better. 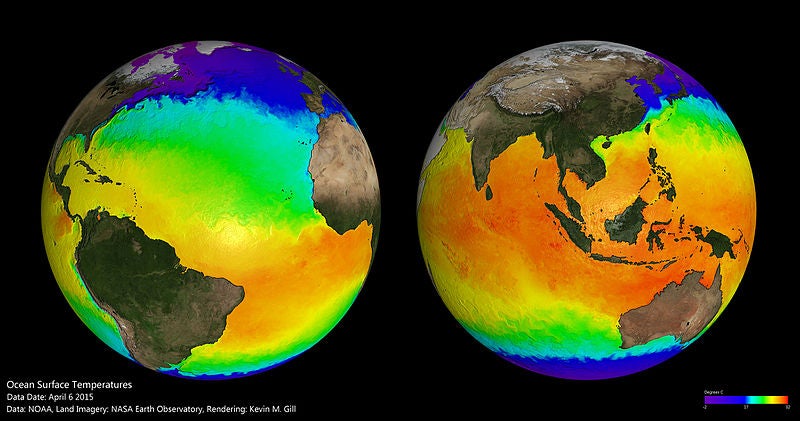 First and foremost, the oceans absorb heat. Without them, scientists estimate that the atmosphere would already be 20°C warmer than it is now. Of the extra heat trapped inside Earth’s atmosphere by the greenhouse effect, about 90 per cent actually gets absorbed by the ocean.

“The oceans are saving us, just because they have very high heat capacity,” said researcher Anna Cabre of the Ocean and Climate Dynamics Group at the University of Pennsylvania.

It takes about one Joule of energy to warm a gram of air by 1° Celsius, but a gram of water needs about four Joules of energy to raise its temperature by 1°. (You don’t usually measure water in grams, because it’s a liquid, but the unit is useful for the sake of comparison).

Earth’s oceans are vast and deep: on average, the water is 2.3 miles deep (it’s much shallower in some places, and in others it’s as deep as seven miles). That’s roughly 352,670 trillion gallons of water, giving Earth an enormous heat sink.

The oceans also help spread that absorbed heat around the planet, which helps moderate Earth’s climate.

The tropics get about four times more solar heating than the poles do, because the Sun’s radiation hits the equator at a much more direct angle there. That’s why tropical waters tend to be warmer than, say, the North Atlantic off the UK coast. Those temperature differences create a pattern of circulation, where warm water from the tropics flows north to the Arctic or south to the Antarctic. As cooler water sinks, it flows southward to the tropics again, and warm water flows north to take its place.

Without the ocean’s system of circulation, solar radiation that fell on the tropics would stay in the tropics, making equatorial regions significantly warmer and leaving higher latitudes to shiver in the cold.

In the Atlantic, for example, warm water from the tropics flows up toward the Arctic in a current known as the Gulf Stream. Four billion cubic feet of water every second flows past the east coast of the US and Canada, moving about four miles per hour before turning toward Europe. “It’s incredible the amount of heat that the ocean transports through the Atlantic,” said Cabre. That heat keeps Northern Europe warmer than it would be otherwise at such a high latitude.

Heat isn’t the only thing the ocean absorbs as it also acts as a giant CO2 scrubber for our planet. The ocean has absorbed between a quarter and a third of all the carbon we’ve pumped into the atmosphere so far. Since 2002, the ocean has pulled 2.5 billion tons of CO2 out of the atmosphere and banished it to the deep. Sinking all that carbon has helped mitigate the effects of global warming.

The system works because carbon dioxide dissolves easily in water. Carbon dioxide molecules bind with water molecules to create carbonic acid (H2CO3), which mostly breaks down into positively-charged hydrogen ions (H) and negatively charged hydrogen carbonate ions (HCO3). Mostly, that process happens in shallower water, but as water cools and sinks near the poles, it pulls CO2 down into the depths.

Oceanographers call that the solubility pump, and it accounts for most of the ocean’s ability to sink carbon. But the ocean is teeming with life, and its smallest organisms also play an important role in pulling out CO2 of Earth’s atmosphere. Scientists call this the biological pump. Microscopic plants called phytoplankton gobble up CO2 to use in photosynthesis, and when they die, their remains carry some of that CO2 with them to the ocean floor. Most of that gets released back into the water as the phytoplankton decay, but by then it’s already in the deep ocean.

It takes a long time for water to rise again after it sinks down into the depths of the Arctic; it will be another 500 years or more before the carbon that’s being absorbed by the ocean today next sees the light of day at the surface.

But it will eventually rise, when the ocean conveyor belt carries it to the warm tropics. Warm water can hold less dissolved gas than cold water, so as water warms and rises to the surface near the Equator, it releases its stored carbon. Normally, the ocean absorbs about as much CO2 as it releases, so the system stays in balance.

Slipping Out of Balance

That balance is skewed now, thanks to all the excess CO2 we’ve pumped into the air since the Industrial Revolution in the 19th century. Now, the oceans are absorbing more CO2 than they release, and the imbalance is taking a gradual toll on the whole system.

But it’s not because the oceans are saturated with CO2, they’re nowhere close, according to Cabre. “Are we reaching a point where the ocean cannot absorb any more carbon? Not yet,” she said. She says the ocean could probably store another few hundred years’ worth of CO2, but it would come with a price. The process of dissolving CO2 into water makes the water more acidic. That process is already causing some marine animals’ shells to dissolve, and if it keeps getting worse, it will wreak havoc on most ocean organisms.

“If you only care about storing carbon, there’s still a lot of space,” said Cabre, “but then you increase acidity, which is bad for a lot of things.” Instead, the problem is heat.

Water warms very slowly, but the ocean is inexorably heating up. The deep ocean is warming slowest, at an average of 0.002° Celsius per year in the waters below 1,600 feet (about 500 meters) over the last few decades. Above that, the upper 1,600 feet of the ocean have warmed an average of 0.005° Celsius per year. The waters within about 250 feet of the surface are heating up by 0.01°C per year.

Warmer water can’t hold as much CO2 as cooler water. Ocean warming also slows the circulation that sinks carbon and mixes carbon from the surface layers with water from the rest of the ocean. In fact, ocean circulation in the Atlantic has been slowly weakening since the 1970s, and it’s now about 15 per cent to 20 per cent weaker than it was earlier in the 20th Century.

Researchers say that may be at least partly thanks to the melting of the Greenland Ice Sheet — researchers such as Stefan Rahmstorf of the Potsdam Institute for Climate Impact Research in Germany, who along with his colleagues, published findings on weakening Atlantic circulation in Nature earlier this year. Warmer water helps melt the ice sheet, which in turn releases fresh water and lowers the salinity of the North Atlantic. Fresher water is less dense than saltier water, so the sinking of salty water that drives circulation in the Atlantic starts to slow down.

That’s why the area of the North Atlantic just south of Greenland has been colder in recent years — less heat is flowing northward with the Gulf Stream and the North Atlantic Drift. It’s also why, despite last winter being the warmest winter on record so far, the North Atlantic and the eastern seaboard of the US experienced record cold. Because the Sun’s heating of the Earth isn’t an even process, neither is global warming; instead, it’s a process full of extreme variations which are too easily masked by global average figures.

Over the next century, those extremes could deepen if the oceans continue absorbing more and more excess heat from our atmosphere. As the global average temperature increases, the tropics will get hotter, but parts of Europe will get much colder. The ocean will sink less CO2, so the atmosphere will warm more quickly; the ocean will absorb much of that excess heat, and circulation will slow a little more.

The good news is that the feedback effect works both ways. If we manage to reduce the amount of CO2 being added to the atmosphere, the system will recover its balance again; that’s the beauty of physics.

If we pump less CO2 into the atmosphere, the greenhouse effect will slow down, and the atmosphere will stop heating up. Earth’s vast carbon-scrubbing oceans will have a chance to catch up, and as they pull CO2 from the atmosphere, things may start to cool down again. Circulation will strengthen again, which will make the ocean more effective at absorbing both heat and CO2.

We just need to stop overloading the system with CO2, and it will keep working smoothly and making our planet a livable place.