We Finally Have the Full Story on Ceres' Mysterious Bright Spots

Water ice from a subterranean ocean? Giant salt deposits from an alien mining operation? Since March, dwarf planet Ceres’ bright spots have mystified scientists, dazzled space nerds, and sparked all manner of wild speculation. A study published in Nature has the answers we’ve been waiting for. Ceres, you are one fantastically complex beast of a space rock.

To recap: NASA’s Dawn spacecraft has been capturing images of Ceres—the largest object in the main asteroid belt between Mars and Jupiter—since it began its close approach in December of 2014. By March 2015, Dawn had reached its first distant orbit around the dwarf planet (yes, Ceres, not Pluto, is the very first dwarf planet visited by humans). The spacecraft has continued to spiral into closer orbits ever since, snapping photos to create high-resolution maps of Ceres’ surface and using several on-board science instruments to probe its composition in more detail.

As Ceres came into focus over the winter, we couldn’t help but draw our gaze to two prominent glimmering bright spots. As we crept closer, we realised that there were not just two of these mysterious features, but lots and lots. The largest of the bright spots, located in the now-infamous Occator crater, is around 6 miles (9 kilometres) wide—as Chris Mills noteds, that’s large enough for an alien city. These things are big, and they are everywhere. So what on Earth are they? 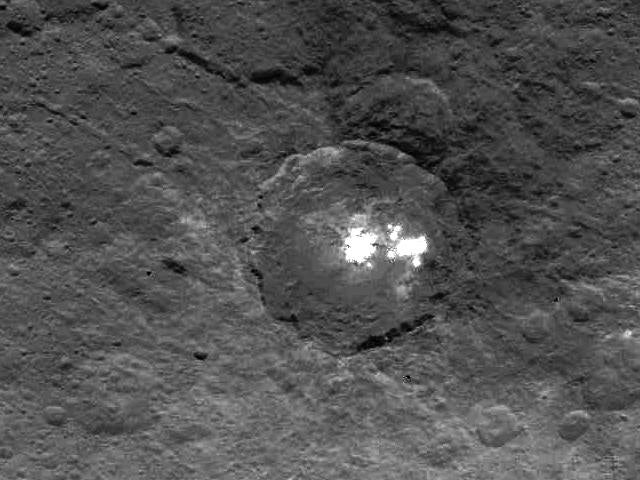 At first, water ice was the leading suspect—perhaps Ceres was displaying cryo-volcanic activity, similar to that on Saturn’s moon Enceladus. Several months later, we started hearing whispers of salt. These whispers became loud and clear in October, when Chris Russell, principal investigator for Dawn, made these remarks regarding Occator crater:

“We believe this is a huge salt deposit,” principal investigator for the Dawn spacecraft Chris Russell told scientists on Monday at the European Planetary Science Congress. “We know it’s not ice and we’re pretty sure it’s salt, but we don’t know exactly what salt at the present time.”

Now, in the most detailed surface analysis to date, a study led by Andreas Nathues of the Max Planck Institute in Germany argues that the mystery spots are actually a little bit of both—mostly salt, some water ice. The combination of these two ingredients probably comes from a briny ice sheet located somewhere beneath Ceres’ surface, one that gets excavated during impacts. We also have much stronger evidence for afternoon haze over at least two of the bright spots—a phenomenon that’s been witnessed over comets, but never over a rocky, asteroid-like body.

“The main problem we had [analysing the bright spots] during approach phase was that our spatial resolution was too low,” Nathues told Gizmodo in a phone interview. As Nathues explains, Dawn’s Framing Camera was initially basing its exposure times on Ceres’ dark background material. The result? “The bright spots were completely saturated,” he said. “In June, we divided our exposure times for the bright spots and the dark surface. Then the spatial resolution started to become sufficient to identify what the spots are.”

Using their new camera settings, Nathues and his colleagues acquired high-resolution images of the entire surface of Ceres, allowing them to pick out numerous bright spots against an asphalt-coloured background. All in all, Ceres bears over 130 glimmering splotches, ranging in brightness from that of concrete to ocean ice. Often, these features are associated with impact craters. Based on precise measurements of their brightness, we can now conclude that the main material in the spots is indeed a salt—more specifically, hydrated magnesium sulphate.

At least a handful of the salt deposits also contain water ice. The big clue here comes from haze clouds, which appear during the daytime over both Occator and Oxo crater (craters across Ceres’ surface are named after agricultural deities). “What we found is if we had very oblique views—if Ceres was located between the Sun and the spacecraft—there was an additional brightness on top of the general brightness of the bright spots,” Nathues said. “This brightness exists only during the daytime, like haze on Earth. This was a surprise.”

While Dawn’s instruments were unable to determine the nature of the haze, independent observations by the Herschel Space Observatory confirmed the presence of water vapour. The most likely explanation is that ice is sublimating from the surface of Ceres under the Sun’s piercing, daytime glare, and settling back down in the evening. We’ve observed a similar diurnal haze pattern on comets, including everyone’s favourite 67P.

Mosaic of Ceres’ surface, with 130 bright spots shown in red. Three zooms provide closer looks at some of the regions. Occator crater (top left zoom) and Oxo crater (top right zoom) are the two brightest regions on Ceres, and the only craters where we’ve found afternoon haze. At the bottom, a more typical crater without haze or evidence for water is shown. Image Credit: NASA/JPL-Caltech/UCLA/MPS/DLR/IDA

What’s the source of this salty, icy, weather-making concoction? Nobody’s sure yet, but the occurrence of the bright spots in craters offers a likely explanation: a briny layer of water ice, buried not too far beneath the surface, possibly spanning the entire planet. “The simplest scenario is that the sublimation process of water ice starts after a mixture of ice and salt minerals is exposed by an impact, which penetrates the insulating dark upper crust,” the researchers write.

For Nathues and his colleagues, the story is far from over. “What we know now is Ceres is partially differentiated—it has a kind of shell structure,” he said. The extent of that shell, and whether it originated somewhere deep in the planet’s interior, is not yet known. But more answers may be coming soon. Dawn is currently spiralling into its closest approach phase, a low-altitude mapping orbit (LAMO) that will position the spacecraft at a distance of 230 miles (370 km) above Ceres’ surface. It’s during this phase that scientists will be able to make gravity measurements and probe the interior composition of Ceres in much more detail.

We’ll also be getting back some new, gloriously hi-res images during LAMO phase. Nathues and his team will use these images to continue studying Ceres’ surface morphology. There are fractures across some of the bright spots, and we’d like to know what role, if any, these features play in bringing briny material to Ceres’ surface.

While there are clearly more details to fill in, it’s nice that we’re finally getting some closure on one of the biggest astronomical mysteries of the year. And in doing so, we’re revolutionising our understanding of the asteroid belt at large.

“Twenty years ago, we always thought asteroids and comets are different kinds of objects,” Nathues said. “The picture was, asteroids are stony objects, comets are from the outer solar system and have a lot of volatile materials. Now, we know there is a continuum.”

Rather than the inert, rocky graveyard we’ve been taking it for, the asteroid belt is shaping up to be a pretty fascinating place.

Top: A false-colour representation of Occator crater highlights the differences in surface composition. Images were captured by Dawn from a distance of 2750 miles (4425 kilometres). Image Credit: NASA/JPL-Caltech/UCLA/MPS/DLR/IDA