Astronaut Scott Kelly on Liquid Salt, a Stinky Station, and Sleeping in Freefall

There are lots of things most of us never contemplate when we fantasise about living in space: what happens to your arms when they don’t naturally fall at your sides? Do you keep your calluses when you aren’t walking? What’s it like to sleep in free fall?

NASA astronaut Scott Kelly — he of the Year in Space experiment, excellent Instagram feed, the not-so-first flower, and water ping-pong — answered these and other burning questions when he swung by Reddit on Saturday for an Ask Me Anything.

Kelly’s feet are getting all-new calluses

For months, Kelly hasn’t worn shoes and tromped the ground like the rest of us Earth-bound folk. Instead, he’s been floating and scrambling, using his feet for leverage instead. This means the calluses on the bottoms of his feet have fallen off, and he’s developing new ones on the top. “[T]he bottoms of your feet become very soft like newborn baby feet,” Kelly reported. “But the top of my feet develop rough alligator skin because I use [them] to get around here on [the] space station when using foot rails.”

Kelly keeps his arms crossed so they don’t drift away

In nearly every photo we see of Kelly, he keeps his arms crossed (unless he’s playing with his food). This stern posture isn’t stylistic, but practical. “Your arms don’t hang by your side in space like they do on Earth because there is no gravity,” he wrote. “It feels awkward to have them floating in front of me.” The tucking and folding continues when he’s out of sight, too: even at night he constrains them within his sleeping bag so they aren’t awkwardly drifting in space.

Going to space without your team hat to wear when watching the big game? Inconceivable! Image credit: NASA/Scott Kelly

You’d think the strict mass limit on personal effects would keep astronauts from committing the common sin of overpacking, but apparently not. When asked what Kelly would advise his Day 1 self now that he’s going on over 300 days in space, he wrote, “pack lighter!” 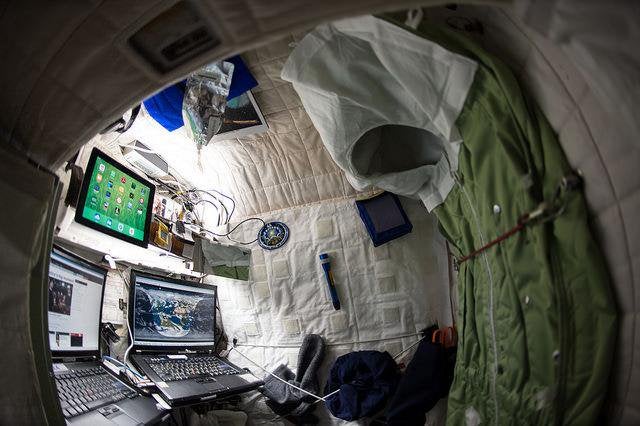 “I am not a great sleeper”, Kelly admitted. “I don’t think I have ever slept 8 hours straight in the last 20 years. I wind up waking up a couple of times.” Unlike astronauts who describe sleeping in space as the ultimate comfort, Kelly finds it actually exacerbates the problem.

“[T]he sleep position here is the same position throughout the day,” he explained. “You don’t ever get that sense of gratifying relaxation here that you do on Earth after a long day at work.” On top of that, it’s noisy. The station constantly hums, so he wears ear plugs every night. The lack of gravity can disorientate him. “If I close my eyes, I can give myself the sensation that I am falling,” Kelly said. “Which I am, I am falling around the Earth.”

Despite all that, he keeps to the same sleep cycle as everyone else, reporting, “We use Greenwich Mean Time and we get up at 6 in the morning and go to sleep at 10 at night.”

The crew really does get along

Although they prank each other “occasionally...” (a story we’d love to hear more about), the astronauts on the space station get along for the most part. Although they sometimes argue (“generally it involves work.”), everyone is aware that they’re tiny, fragile humans a hairsbreadth away from the harshness of space. “We get along very well,” explained Kelly. “We have to because we rely on each other for our lives.”

Right now, the five visible-eye planets are all visible from Earth before dawn. Kelly’s also trying to catch the view. “I’ve been looking for them,” he wrote. “I don’t think our orbit is where we can see them yet, but we will be. I’m keeping my eye out for it and will certainly share them with everyone when I see it.”

“We need to talk...” is universally terrifying

When asked about being afraid or alone because of being in space, Kelly downplayed concerns about his environment. “It is a little bit surreal to know that you are in your own little spaceship and a few inches from you is instant death,” he acknowledged. He’s more aware of it during spacewalks. “When I look at the clouds over the Earth, and I know how high clouds are, I get a sense we are really, really far above those clouds,” Kelly recounted. “I wouldn’t call it scary, but I am aware I am in space.”

But he has been scared when NASA wanted to talk to to him privately. “I have been afraid when the ground has called and privatised the audio,” Kelly recounted. “[That] generally meaning something bad has happened.” Although he didn’t clarify the circumstances of the call, we know Kelly was on the space station five years ago when his sister-in-law, Congresswoman Gabrielle Giffords, was shot.

While not the first, Kelly’s space flowers are the most photographed and most beautiful. Image credit: NASA/Scott Kelly

On a related note, the space station hasn’t been aired out in fifteen years. It is smelly. “Smells vary depending on what segment you are in,” started Kelly. “Sometimes it has an antiseptic smell. Sometimes it has an odour that smells like garbage.” But the smell of the hatch when transiting back from a spacewalk is entirely different. “The smell of space when you open the hatch smells like burning metal to me,” he concluded.

When asked what the creepiest thing he’s encountered on the job, Kelly admitted, “Generally it has to do with the toilet.” Considering the previous horror stories we’ve heard of floating messes or broken toilets creating a vacuum seal, we’re not surprised. But he still managed to add something novel and gross to the collection: “Recently I had to clean up a gallon-sized ball of urine mixed with acid.” Why acid? It’s added to the urine to keep it from clogging the system or damaging machinery. Ew.

Kelly is a sci-fi junkie

Kelly joined in the astronaut viewing parties for Gravity and The Martian, but he’s also demonstrated a love for Star Wars with a series of thematic photos leading up to the premiere. He also branches out into other genres, writing that Straight Outta Compton is on his to-watch list when he gets home.

Any loose powder on the space station is a catastrophe for the ventilation systems. Instead of little packets of salt granules, Kelly explained, “We actually use liquid salt that we put on our food.”

The hard work is worth it

Being an astronaut looks so easy and fun from the outside, it’s easy to forget how much work goes into keeping humans living in space. “It is a huge army of hard working people to make it happen,” Kelly reminded us.

But seeing the Earth from afar is gorgeous. “The brilliant and varied colours of the blue water and contrast [of the Bahamas] from here is pretty spectacular,” Kelly glowed about his favourite photography target. And seeing North and South Korea at night, or watching Hurricane Patricia build provides a profound sense of context lacking from the ground. He reported that when he gets home, “I will appreciate nature more”.

He just hopes that NASA will keep being able to explore, discover, and push the boundaries into the future. Although he avoided weighing in on the current Presidential race, Kelly has certain objectives he hopes any candidates will meet. “I would like the next president to support a budget that allows us to accomplish the mission that we are asked to perform, whatever that mission may be,” he wrote.

Kelly launched for the space station on March 27, 2015 with cosmonaut Mikhail Kornienko. They are scheduled to return to Earth on March 3, 2016. Kelly now holds the American long-duration spaceflight records for NASA. [NASA, Reddit]