The FLIR Scout TK is a compact night-vision camera, with heat sensors capable of taking thermal images from up to 100 yards away. Unlike other FLIR offerings, you don’t need your smartphone to use this one, it weighs 170 grams, it doesn’t need ambient light to operate, and its four-inch length means it’s easy to tuck inconspicuously into a trenchcoat pocket as you’re out BEING A SKETCHBALL WHY WOULD YOU WANT THIS CAMERA?

There are only three reasons why you’d want this camera, which will retail at $600/£409 when it is released later this year. Two of them are creepy:

Right? I mean, the camera could also come in handy if you’re looking to impressionistically capture the body-heat outlines from your recreational fire spinning & howling league, but £400+ is a lot of money. No fire spinner has that kind of cash.

Unlike FLIR’s top-of-the-line products, the FLIR Scout TK isn’t aimed at professionals. It’s an outdoorsy hobbyist tool, not equipment you’d choose to identify gas leaks, or use in a professional security-guard situation. So what exactly is it ideal for, if you’re not trying to bow-hunt an ox after dusk or pretend you’re Veronica Mars?

Simple: Spying on your dog. Not as violent as night-hunting, not as morally and legally murky as amateur surveillance on humans, dog-spying is so much so the obvious use for the FLIR TK that the company actually includes an image of a dog at nighttime as an example of what you can do with the device. 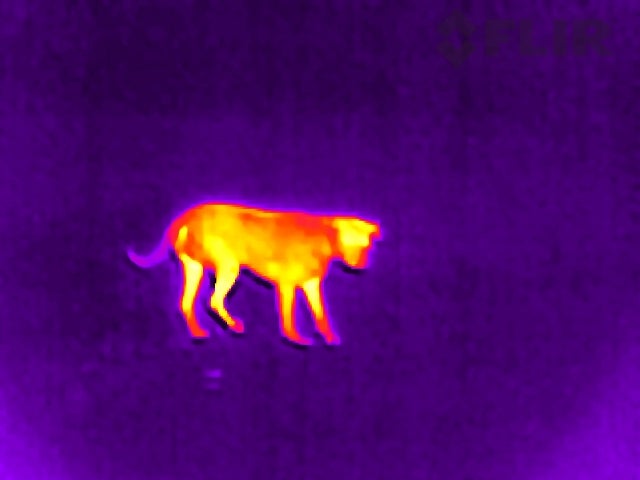 This is the best camera I’ve seen for making sure you see your dog poop at night without your dog knowing you’ve seen him poop at night.