Last year we heard about Derby, a dog born with underdeveloped legs and paws. Tech firm 3D Systems designed a pair of prosthetic limbs for the Husky mix, but they were too short, and they also prevented Derby from being able to sit normally. A new upgrade now overcomes both of these limitations.

Derby’s original prosthetic was designed by Tara Anderson and her team at South Carolina-based 3D systems, but they were never meant to be the permanent final version. The 3D-printed artificial front limbs were short, causing the dog to stoop down close to the ground. But the project fulfilled two goals: it showed that the concept could work, while simultaneously helping Derby learn how to walk with prosthetics.

For the next phase of the project, Anderson sought to create a prosthetic that would get Derby levelled off such that his back was straight. Her first strategy was to take the initial design, called “the blade,” and simply make it bigger. But it didn’t work. The artificial limbs flopped to the outside, giving the impression that Derby had two large balloons sticking out from his shoulders. So it was back to the drawing board.

The design team decided to move forward by developing a device that was capable of meeting Derby’s physical and psychological needs. Ideally, they wanted to create a taller prosthetic limb that worked more like a natural knee, including a certain amount of give-and-take. Using a method of 3D-printing known as Selective Laser Sintering, the designers ultimately succeeded at creating a nylon prosthetic limb with these critical attributes. 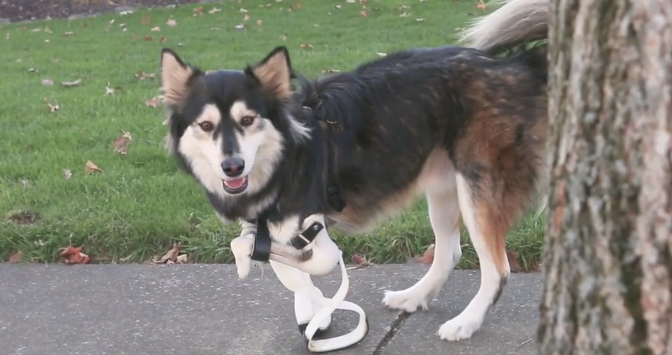 “Derby took to his new prosthetic very well,” noted Derby’s adoptive owner Sherry Portanova in a 3D Systems video. “No different really in having them on than the old ones except it raised him to his proper height. He’s walking in a straight line and he’s sitting like a real dog sits, like he hasn’t really been able to do.”

Excellent news. Good to know that our canine companions will be joining us in our cybernetic future.