Researchers in China have genetically engineered monkeys to exhibit autistic-like behaviours, including impaired social skills and increased anxiety. This research is poised to improve our understanding of brain disorders, but ethicists say the harm endured by these monkeys is simply not worth it.
Monkeys are increasingly being used as models for human diseases, and for good reason. Mice are extremely limited in their ability to model human cognition and behaviour, while great apes are being phased out in research experiments. Humans and monkeys share a number of traits, including the capacity for attachment and empathy, communication, internalisation of social rules, giving, trading, revenge, social maintenance, and attending to group boundaries.

At the same time, recent advances in genomic technologies are making it possible for biologists to create transgenic monkeys with customised mutations. These “humanised” monkeys can conceivably model all sorts of human diseases, including schizophrenia, Alzheimer’s, and severe immune dysfunction.

Now, a new study led by Qiang Sun and Zilong Qiu from the Institute of Neuroscience at the Shanghai Institutes for Biological Sciences demonstrates that it’s also possible to bioengineer monkeys with autistic-like behavioural characteristics. The details of their experiment can now be found in the latest edition of Nature.

The scientists said their research will “pave the way” for the use of genetically engineered macaque monkeys for studying other brain disorders. But does the end justify the means?

“The very reason that nonhuman primates (NHP) are so appealing to researchers is also of the greatest ethical concern and contradiction,” said University of Toronto bioethicist Kerry Bowman. “Transgenic NHP will potentially exhibit traits that are the most human-like; in turn this puts them at greater risk of research exploitation.”

To create the transgenic monkeys, the researchers used a virus to deliver a modified human gene, MECP2, into the genome of long-tailed macaques, or Macaca fascicularis. The resulting monkeys exhibited autistic-like behaviours, including decreased social interaction, anxiety, and a tendency towards repetitive movements. The researchers also demonstrated that these genetic changes — along with the attendant behavioural changes — could be be passed down to the offspring of the modified monkeys. 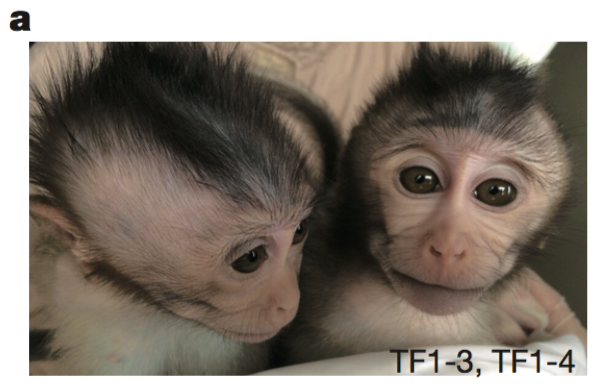 The MECP2 gene, or Methyl-CpG-binding Protein 2, has been strongly associated with Rett syndrome, a severe neurodevelopmental disorder that’s classified as an autism spectrum disorder. Symptoms appear typically after the first year, and include slowed growth, loss of normal movement and coordination, loss of communication abilities, abnormal hand movements, cognitive impairments, and agitation and irritability, among many other symptoms. Rett syndrome is of significant interest to scientists because it’s the first autism spectrum disorder with a defined genetic cause.

Scientists have been able to replicate the MECP2 mutation in mice, but it has been difficult to identify autism-like behaviours in mouse models. Macaques, on the other hand, are primates with highly evolved social and communication skills (long-tailed macaques are similar to toque macaques, recently featured in the Disney documentary, Monkey Kingdom). The purpose of the SIBS study was to deepen our understanding of autism spectrum disorder, but it led to some ethically dubious experiments.

The researchers modified 53 macaque embryos and implanted them into 18 surrogate mothers. This produced eight live births — three male, five female — and four stillbirths. All the resulting monkeys were shown to carry the human MECP2 transgenes.

The transgenic monkeys developed normally at first, but symptoms began appearing soon after they were one year old. In behavioural tests, the transgenic monkeys interacted less with both modified and unmodified monkeys within the same group. By 18 months, the transgenic monkeys began to display anxiety-associated behaviours that were significantly more pronounced than normal. The monkeys also exhibited repetitive body movement and various cognitive impairments. Essentially, the researchers succeeded in replicating Rett Syndrome — or a least a monkey version of it — in the macaques.

What’s concerning about this particular study is that the researchers assessed anxiety levels by frightening the monkeys in various ways, and then monitoring the intensity of their shrieks and screams. “Clearly from our own human moral perspective we have harmed them by the very rules we use to define what makes us human and worthy of elevated moral status,” said Bowman. “In turn, as an ethical construct, the more social and cognitive capacities primates possess, the greater our obligations to them. Creating social impairment and anxiety in a primate is clearly a highly significant harm.”

California State University bioethicist Linda MacDonald Glenn says the ethical dilemma presented by this research has to do with whether or not the scientists are justified in using macaques in this research. “The justification is based on the notion of humans being perched at the top of a hierarchy, with dominion over the planet and all of its other inhabitants,” she told Gizmodo. “Fortunately, this attitude is changing towards an ethos of interdependence and stewardship, as evidenced by the recent NIH ban on great ape research.”

Because primates share genetic, biological, and behavioural similarities with humans (macaques and humans share about 97.5 per cent of the same genes), ethicists are calling for a phasing out of experiments on all primates.

“How do we balance the perceived benefits of inflicting harm against our responsibility as stewards?” MacDonald Glenn said. “I would like to believe that the discourse in this arena is progressing, and bringing out more awareness of the ethical dilemmas.”

Monkeys, though similar to us, aren’t like humans in some very important ways. Autism probably doesn’t manifest the same way in macaques as it does in humans. “While the NHP genomes are similar to ours, there are also significant differences,” said Bowman. “Thus, there are limits to what we can learn about the function of genes and their interactions until we study them in the human genome.”

What’s more, introducing human genes into other animals could harm them in ways that aren’t well understood. Bowman is also worried because the genetic changes in the monkeys were heritable. So the scientists run the risk of “damaging the entire species if such altered macaques were to reach wild populations”. [Nature]