Last week, we learned that Disney wasn’t making a live-action Star Wars television series anytime soon. That’s a shame, because if there is one benefit to sweeping away the old Expanded Universe, it’s that there is now so much of the new galaxy to explore, and TV would be a perfect way to do it. Here are five Star Wars show ideas Disney should be working on already.

In the Imperial criminal justice system, rebellion-based offences are considered especially heinous. In Coruscant, the dedicated Stormtroopers who investigate these vicious felonies are members of an elite squad known as the Special Victim Elimination Unit. These are their stories.

OK, that’s a joke, but the idea really isn’t. Star Wars spends a lot of time with heroes who, when they’re dealing with laws, are dealing with them on a galactic scale. Is there a uniform penal code for every Republic? What if you break the law on Naboo but it wasn’t illegal on your home planet? Or how about just the cogs in the wheel trying to keep people from thieving and murdering other people? Coruscant’s got a vibrant underbelly that would be just perfect for this. Plus, Law & Order’s been franchised out all over the world; why not a new galaxy?

I cannot express how many times I have yelled “Why don’t we have a Star Wars version of Top Gun yet?!” while drunk and angry at a bar. (Or my home. Or my office.) It seems like such a slam dunk to have a show about training pilots. I want living legend Wedge Antilles teaching a new generation how not to die in space. I really want to somehow make him say “Son, your ego is writing checks your body can’t cash.” I want squadrons of people signing up because of a poster of Poe Dameron and his tousled hair, only to find out they don’t have the right stuff and getting cut. I want egos and flight simulators and the sad droop of Admiral Ackbar’s barbels when he’s ordering something that will get a lot of newbies killed. OH MY GOD WHY DO WE SPEND SO MUCH TIME WITH JEDI. PILOTS. LET’S DO AN ENTIRE SHOW JUST ABOUT PILOTS.

Espionage gives a lot of avenues to dive deep into the Empire and the Republic at the same time. There isn’t a ton of moral ambiguity in the Star Wars movies — the Empire is evil, the Rebellion is good — but spies always introduce a grey area. You can have a deep-cover Rebellion agent who starts idealistic but grows more torn as she has to betray people for information.

It lets us see regular Imperial citizens who are just trying to survive but also could end up Force-choked because of her. Or an Imperial who decides to become a double-agent and all the work he has to do to gain the trust of the Rebellion and not lose the trust of his superiors. Doing real espionage, no action, would also be a great way to distinguish this show from every other big franchise on TV. 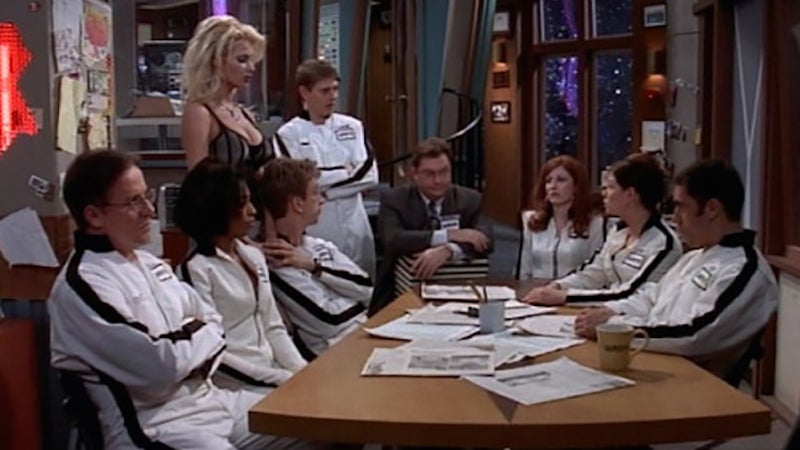 In my mind, it’s the space episode of NewsRadio, but every week. Te show had its news reader say this:

Tragedy struck today in Sector 9 as rebel terrorists blew up the Death Star killing thousands. The Rebel Alliance, a fringe group of Anti-Empire fanatics, has claimed responsibility for the terrorist act. Fortunately Lord Vader escaped without harm. Our hearts go out to the families of the victims.

Tell me you would not watch an entire show where people have to deliver the news of the Star Wars galaxy. On the Imperial side, you can watch propaganda being made. On the other, intrepid journalists hunt for the truth.

Bear with me, this makes sense in context. Droids Playing Sabaac would be an anthology show where a bunch of droids get together every week and tell stories about their various owners. You could tell any story this way, ranging from protocol droids working in the government to scut droids doing cleaning. Little slices of life from the Star Wars universe. No pressure to remember a long, overarching plot. Just fun vignettes every week.