How Connected Cars Will Transform Our Lives at Home

Let me put this bluntly: Smart homes are pretty dumb. Or at least historically, connected devices for the everyman’s house have seemed gimmicky at best. This week at CES, however we saw some new technology that stands to reform our very conception of how homes work.

The crazy thing is that the game changing device we saw isn’t really a device at all. It’s also not something that you install inside your house, though it could become the killer app that makes all of those seemingly gimmicky gadgets work together to make that magically futuristic dream of a smart home come true. That thing—wait for it—is a connected car that talks to all of your other devices. And you talk to the car.

It’s not just one car. In Las Vegas this year, pretty much every major car company announced innovations aimed at helping you feel like you’re never off the grid. But if you’re thinking about it from a domestic living point of view, these new connected cars will work with other connected devices so effortlessly that it will almost be like you’re never truly away from home.

We’ve heard a lot about the so-called Internet of Things in the past couple of years. The idea that all the objects in our lives ought to be internet-connected, slurping up data and beaming it to each other, intuiting our needs before we can, seems cool. The problem is that a lot of this tech has felt weirdly arbitrary, shoehorned into our abodes. Who cares if you can turn your living room lights on with your smartphone? If you need special apps that depend on buggy infrastructure, it’s hardly more convenient than a simple switch.

But things are changing. Instead of relying on unreliable sensors and arbitrary geofencing technology, the future of a voice-activated smart homes and connected cars that integrate with the system means that you can not only control connected devices inside your house by talking to them but also see what’s happening at home on your dashboard. 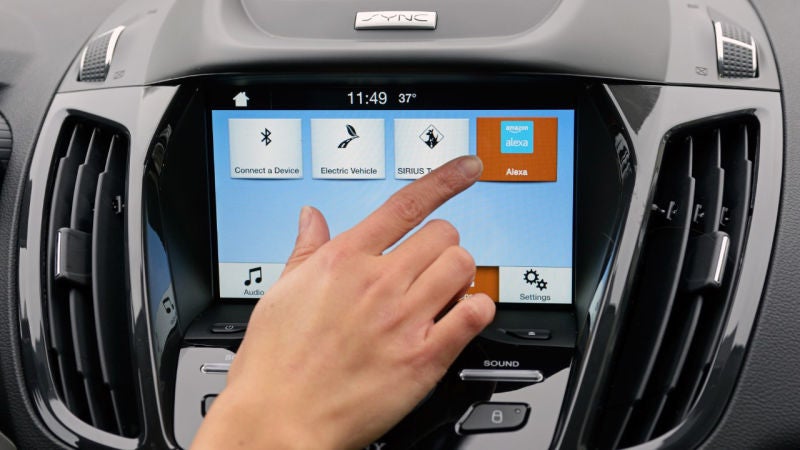 Ford and Amazon, two of the biggest companies on Earth, recently announced plans to make your car and your home more connected than ever. Ford announced the new partnership at CES. Part of the new plan involves Alexa, the Amazon’s digital assistant which, unlike Siri, was not designed to be confined to a smartphone. We first met Alexa when Amazon released the Echo, a wireless speaker designed to serve as a voice-activated home hub. Now, Alexa will integrate with Ford cars as well as hundreds of connected devices. So you can talk to your car, and your car will talk to all your smart home gadgets no matter where you are (Amazon Echo and Alexa is not yet available in the UK.)

Ford’s not alone in its commitment to connected cars. Mercedes-Benz is also looking to smudge the lines between your car, your connected home, and the whole rest of the internet. They’re working with Nest, the Google-owned makers of the intuitive thermostat as well as the popular Nest Cam. Earlier this year, Nest announced an exciting new program that would let its devices work as a hub for a whole host of other connected home devices like the Philips Hue lighting system and Yale smart locks. So it seems imminent that you’ll be able to unlock your door, switch on the kitchen lights, and even turn on your TV when you’re a few streets away from home.

So what does this car-powered connected lifestyle look like? Pretty awesome, honestly.

Picture this. It’s five o’clock and you’re leaving work. It was a long-ass day in the salt mines and you can’t wait to get home. Luckily, an evening’s worth of errands could soon be done from your car.

First things first, how are the kids? With any number of connected home cameras, you can keep an eye on who’s coming and going through an app. This capability’s been on smartphones for a while, but now that car companies are starting to build apps for your vehicle’s infotainment system, you could soon be able to take a peek on your dash. Facial recognition technology offered by several of these cameras will register when your kids walk in the door. So you could just ask your car, “Did the kids get home?” as you’re pulling out of the office parking garage. The car will let you know.

Now you’re on the way home and need to stop by the supermarket to quickly grab stuff for dinner. You park and suddenly realise you don’t remember what’s are left in the fridge. That’s when you turn your gaze to the dashboard where you can check a live feed from the cameras inside your connected refrigerator. Boom, turns out you do need another more beers after all. (Long day.) This much blogged-about smart fridge feature seems sort of gimmicky. Or at least, it does until you’re sitting in the supermarket car park wondering what to buy.

For now, the fridge-peeping tool works through a smartphone. Pretty much all smart home devices do. You can imagine saving time—and being safe—by asking your car to have a look in the fridge instead. “Hey car, am I out of Fosters?” The car will tell you.

Again, these technologies were all on display in Las Vegas this week. In the kitchen, Samsung’s smart fridge is equipped with cameras inside that let you monitor your food supply. Whirlpool’s new washer and dryer works with Amazon technology to restock detergent automatically. The appliances also connects to smart thermostats, automatically switching to low energy during non-peak hours to cut your utility bill. Samsung also announced the integration of SmartThings, its smart home platform, and its new television sets. This means that your TV can work as a home hub and even talk to Alexa through an Amazon Echo. Heck, your car can even be an office too thanks to some wild new technology that Harman introduced this week. These kinds of practical applications can be controlled from anywhere — in your car or from your phone, miles away.

Back to our hypothetical commute: You’re driving back from the shop, and you want everything ready for your arrival. So if you’re driving a Ford of the Future, you can say, “Alexa, turn on the kitchen lights, open the garage door, heat the oven to 400-degrees, and turn on the football.” Voila: Your palace is set for your return, and you didn’t even have to leave the car or buy new batteries for your garage door opener.

So you’re home, the oven is already hot and waiting for that frozen pizza you just bought at the store. You crack open a beer and finally make it to your couch. It’s time to watch TV, and it’s already on because your car turned it on. But the match sucks, and you want to watch a movie. Just as you did in your car, you can ask Alexa to turn on Netflix. Fifteen minutes later you’ve got a piping hot pie, and your smart oven even remembers to turn itself off. This is the automated home experience of the future we were promised!

The experience works because it’s effortless. Or at least the next generation of connected devices is designed to be effortless. We’ll need to live in these futuristic smart homes before we know exactly how the technology improves our lives. The connected car innovation is a no-brainer, though. Connected cars is especially exciting because it means we don’t have to depend on our smartphones for everything anymore. (You shouldn’t be looking at your smartphone when you’re driving anyways.) All of this innovation comes in preparation for the imminent, amazing future of autonomous cars where you’ll soon have more time and freedom to get stuff done on the go.

No longer are your house and your car two separate worlds. Based on the latest trends, the smart home is finally becoming a real thing, soon to be filled with devices that are actually useful, intuitive, and empowering. Connected cars will make you feel more in control of your home than ever, even from afar. Because on some ways, it’ll feel like you’ve never left.