Interest in the iPhone may finally be waning. For the first time since its creation in 2007, Apple is reporting a year-over-year stall in demand for its pricey pocket computer.

So what the hell does all this mean? After all, that’s a lot of smartphones!

Yes, it is. Apple’s first ever iPhone sales plateau doesn’t necessarily mean it’s losing the title as reigning smartphone sales champion, but it does mean that Apple’s biggest source of revenue (about two-thirds, actually) may be stalling. Although that southward trending sales figure is a first for Apple, it certainly isn’t the first for most smartphone makers, who’ve been feeling a similar mobile sales plateau for at least a year aided in no small part by a slowing Chinese economy. 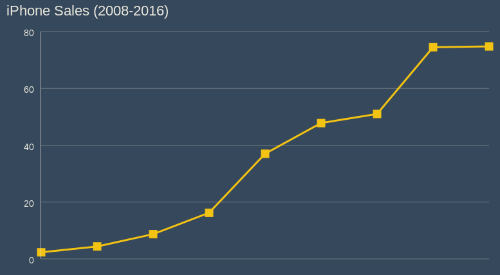 iPhone Sales in millions from reporter numbers starting in January 2008.

iPhones are also starting to have staying power, much like Apple’s iPad lineup. Whereas early iPhones offered massive improvements over what came before it—with some software even being upgraded into oblivion due to out-of-date processors. The iPhone 6s offered little more than the arguably useful 3D Touch and gimmick-filled Live Photos.

Although the 6s did come with the faster A9 chip, the Pew Research Center shows that the top five uses for smartphones includes text messaging, voice/video calling, internet, email, and social networking. You don’t really need blazing processors for any of those things. As the push for smartphone-powered VR continues, that could change, but until then a better processor doesn’t really mean much.

Even so, this number alone isn’t enough to definitively declare that iPhone sales will forever be on the decline. When looking at the sales difference between iPhone 5 and 5s, you can see that the 5s only eked out a measly 3.2 million more than its predecessor. The 6s shows similar trends, though at an alarmingly smaller number.

Apple’s answer to this less-than-stellar report seems to be “strength in numbers.” Rumours of three different iPhones for 2016, the iPhone 7, 7 Plus, and the much talked about 4-inch iPhone 5se, will most likely right the mobile ship, especially if Apple sticks with its bi-annual habit of reinventing the iPhone’s design with the iPhone 7 and 7 Plus. Some leaks already insinuate some head-scratching smartphone retooling.

Today the iPhone didn’t win big, but it’s far from being a loser.