Mark Zuckerberg just announced that his “personal challenge” for the new year is to build an artificial intelligence to help him around the house. Sound familiar? It’s basically the (horrifying) premise of Ex Machina.

There are some spoilers below, if you haven’t seen the movie.

Imagine Zuck as the film’s antagonist, a mad billionaire named Nathan who owns the world’s largest tech company: Blue Book. Sure, the Facebook founder isn’t quite as dark and mysterious as Oscar Isaac, who played Nathan the robot maker in Ex Machina. Mark Zuckerberg isn’t a hard-drinking bachelor with a million acres of remote wilderness where he conducts out weird experiments on sexy fembots—not that we know of, anyway. Zuckerberg is one of the few people on Earth with the resources and the power to create his own personal artificial intelligence. And that’s exactly what the 31-year-old wants to do, too.

My personal challenge for 2016 is to build a simple AI to run my home and help me with my work. You can think of it kind of like Jarvis in Iron Man.

I’m going to start by exploring what technology is already out there. Then I’ll start teaching it to understand my voice to control everything in our home — music, lights, temperature and so on. I’ll teach it to let friends in by looking at their faces when they ring the doorbell.

Sure, Jarvis—or you could also think of it as Ava, the angel-faced android from Ex Machina. Ava is an assistant who can help out around the house and keep you company, and her “brain” uses the data from countless web searches both by and about the people she’s serving. So if she was Zuck’s butler, perhaps she would already know what kind of what kind of music his guests would like to hear or even what beer they’d like to drink. 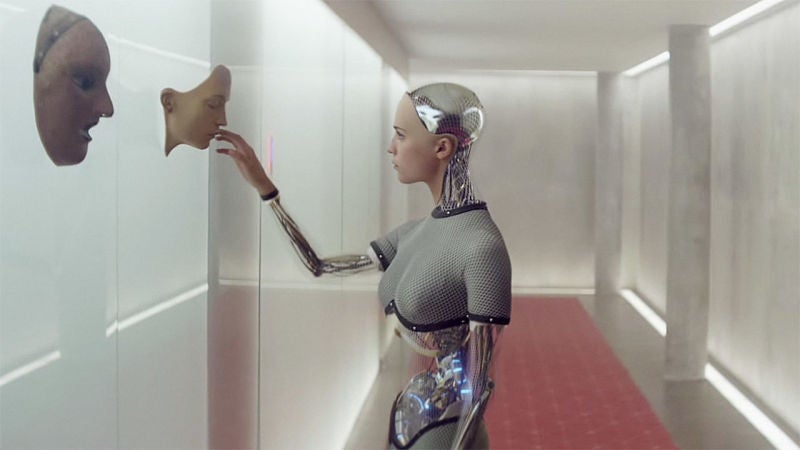 It sounds fun and futuristic until it’s not. If you haven’t seen Ex Machina, you should probably stop reading now. If you have seen the movie, you’ll remember that Ava is preprogrammed to tap into the search history of the protagonist, Caleb. This makes Ava so powerful that she can outsmart humans without them even knowing it. This power is exactly why so many very smart people are terrified by the possibility of true artificial intelligence.

Now, a real-life tech billionaire is pouring his own private intellectual energy into building a powerful AI. We can assume that he’ll be using his own Facebook data to program preferences into the pseudo-Ava and leverage other data to make the software smarter. Could be fun, right? Well, this is essentially the same premise of Ex Machina, a movie that does not have a fun ending.

Time will tell whether Mark Zuckerberg’s personal AI will make him eggs or take over the planet. For now, we may as well revel in the fact that it takes less than a year for tech tycoons to mimic the ambitions of sci-fi villains in real life.