Theoretical physicists have been predicting that it should be possible for knots to form in quantum fields for decades, but nobody could figure out how to accomplish this feat experimentally. Now an international team has managed to do just that, tying knots in a superfluid for the very first time by manipulating magnetic fields.

Led by David Hall, a physicist at Amherst College, and Mikko Möttönen of Aalto University in Finland, the group describes their groundbreaking achievement in a new paper in Nature Physics.

It’s tough to visualise these exotic objects, but they are essentially particle-like rings or loops in a quantum field connected to each other exactly once. A mathematician might not consider these structures to be true knots; typically a knot is defined as a knotted circle, like a pretzel, while a rubber band would be considered an “un-knot”. Hall and Möttönen prefer to think of their structures as knotty solitons.

And what’s a soliton, you may ask? There is a certain type of travelling wave that keeps rolling forward at a constant speed without losing its shape. That is a soliton, and such objects also show up in quantum field theory. As I wrote in a 2014 article for Quanta, “Poke a quantum field and you will create an oscillation [wave] that usually dissipates outward, but configure things in just the right way and that oscillation will maintain its shape” — just like a travelling wave.

Möttönen read about theoretical predictions of quantum knots, and became intrigued by the possibility. After making a few pencil-and-paper calculations, he ran computer simulations to demonstrate what to look for in the experimental data, and teamed up with Hall’s research group at Amherst to test his findings. 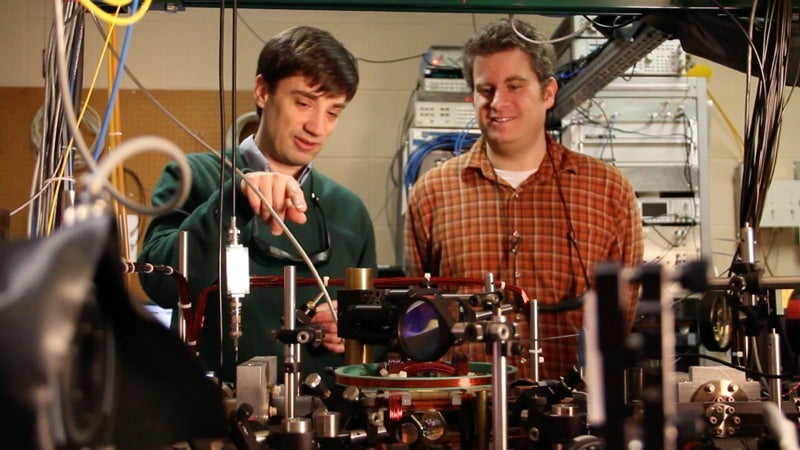 First, they needed a medium — in this case a quantum state of matter known as a Bose-Einstein Condensate (BEC). At normal temperatures atoms behave a lot like billiard balls, bouncing off one another and any containing walls. But they do so more slowly as you lower the temperature. Get the temperature down to billionths of a degree above absolute zero, and the atoms are so densely packed, they start to lose their individual identities. You end up with an ultra cold sample of quantum matter.

Physicists created the first BECs in 1995, 70 years after they were first predicted, but once they figured out the trick — and had the right technology — making BECs became routine. “Now it’s like you sneeze and a BEC comes out,” said Hall. More specifically, the quantum matter in the Amherst/Aalto experiments is a superfluid, since it flows with no viscosity.

The next step was to actually tie the knots via clever manipulation of magnetic fields. The superfluid sample has a quantum field, best envisioned as a series of points in space, each with a specific orientation. Think of a bunch of arrows all pointing up, for example — that is the starting state of the superfluid. When a knot forms, it has a core, essentially a circle of points where the arrows all point down. Hall compares it to a god’s eye yarn pattern. “If you followed the magnetic field line, it would go toward the centre, but at the last minute it would peel away into a perpendicular direction,” he said. “It’s a particular way of rotating these arrows that gives you this linked configuration.”

The experimental setup was so delicate, that once the process started, even bathroom breaks were verboten, as Möttönen discovered to his detriment during one of his visits to the lab. The slightest movement of any metal object — like an office chair — could disrupt the magnetic field and keep the knots from forming. “We were limited by out ability to keep our attention focused,” Hall admitted. “After an hour of this, your back is killing you.”

But all the effort and aching backs paid off in the end. “We started with absolutely nothing working and we worked for more than year before we got results,” said Möttönen. By the time they were done, “It was just matching one to one with the simulations.” The group has got much more adept at twisting knots into quantum fields since then, even managing to take movies of the knots they make.

The knots created by Hall and Möttönen resemble smoke rings, which seems especially appropriate, given the history of knot theory in physics and mathematics. Back in the 19th century, Scottish physicist Peter Tait performed a number of experiments involving smoke rings. William Thomson (Lord Kelvin) was struck by how these rings could form and be stable enough to travel pretty far across the room before dissipating. Tait described them as being like “rings of solid India rubber”.

It inspired Thomson to develop a theory that atoms were knots tied in the swirling vortices of a medium then known as the luminiferous aether. At the time, it was believed this aether must exist to explain the strange behavior of light. An ideal fluid with no friction (zero viscosity) would make such rings stable, and the aether was conceived as an ideal fluid, much like the superfluid used in the Amherst/Aalto experiments. Different kinds of knots would correlate to different kinds of atoms — hydrogen or oxygen, for example. Tait even compiled a classification of types of knots, attempting to build his own version of a periodic table of elements.

It wasn’t correct, of course: by the dawn of the 20th century, experiments had confirmed that there is no such thing as the luminiferous aether, and without it, the theory doesn’t work. But some physicists consider vortex knot theory to be the original string theory.

One of the open questions is what happens to these quantum knots over time. The knots are topologically stable: unlike the knots we tie in ropes or shoelaces, a topologically stable knot cannot be untied without cutting the rope, although you can relocate the knots within the rope. Similarly, the quantum knots in the Amherst/Aalto experiments cannot be separated without breaking the rings. “It can’t un-knot itself; it’s stuck in whatever weird way it’s been twisted together [in the superfluid],” said Hall.

The only way the knot can escape its topological prison is to shrink, which it should do over time, because it will seek to minimise its energy, much like a ball wants to roll down a hill to minimise its potential energy. So these knots may not be dynamically stable.

Hall would especially like to find out whether the knot can last longer than its superfluid medium. “If it does, then it’s effectively stable,” he said. “But if the superfluid hangs around and the knot winks out of existence, then it’s clearly dynamically unstable and that would be sad, because then it’s hard to study.” 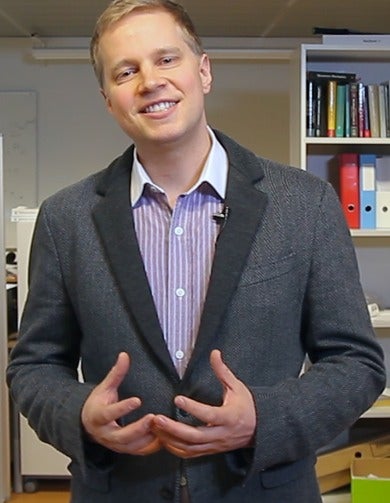 “Each higher group [applied physicists or engineers, for example] is picking out things from the layers below and putting them together in new ways,” he said. “You get your consumer products at the apex of the pyramid, but you just don’t know, at the base, what’s eventually going to be useful.”

That said, Möttönen believes the work might provide a good proof of principle for physicists interested in developing topological quantum computers. Such a design would braid qubits into a kind of knot; different kinds of braids would encode different computational tasks, and those structures would be topologically stable. “The result does not depend on the positions of these things,” said Möttönen. “If you move them around a little, it doesn’t matter, so [such a computer] should be really robust against any error.”

The design is still very much in the early stages, but it’s promising enough that Microsoft is collaborating with physicist Charles Marcus (now at the University of Copenhagen), among others, to bring the project to fruition.

What would be really interesting is if the Amherst/Aalto group can manage to create more complicated quantum knots. Perhaps there is an entire class of these objects, much like the chart of real-world knots compiled by Tait in the 19th century. For Hall and Möttönen, this is just the beginning of the story.