Take an Audio Tour of Classic Paintings Transformed Into Soundscapes

Many have savoured the arresting visual beauty of Raphael’s Madonna del Prato (1505). Now you can listen to it as well, thanks to a new series by Athens-based artist and physicist Yiannis Kranidiotis, who transformed this and other classic paintings into haunting digital soundscapes.

Kranidiotis studied physics at the University of Partas in Greece, but his interest in the interactions between light and sound — also featured in his earlier light installations — has its roots in a course on lasers and optics he took at Essex University. Combine that with his musical background, and you have the makings of his “Ichographs” series.

Sound and light (colour) are both wave-based phenomena and hence have similar properties, such as frequency, wavelength, and amplitude (loudness). “As a physicist, I was always fascinated by these common properties and I was investigating ways to highlight and juxtapose them,” he told The Creator’s Project. 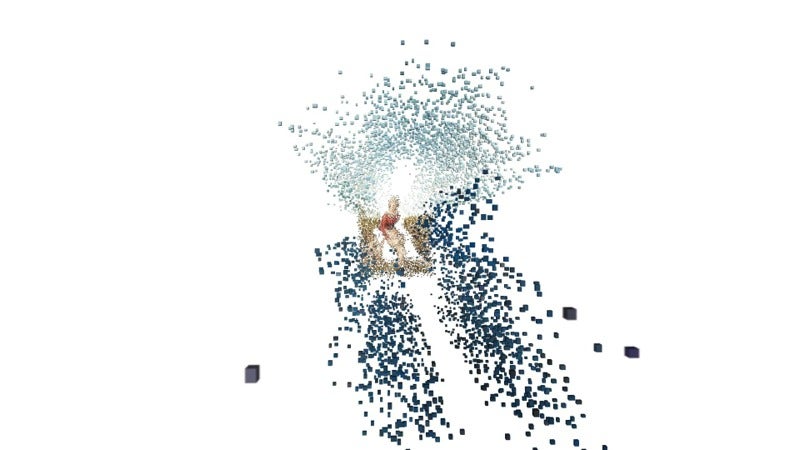 Kranidiotis broke up in Raphael’s masterpiece into 10,000 little cubic particles, and then translated all the colors of those particles into corresponding frequencies of sound. Reds are warmer colours and are associated with higher frequencies (up to 800Hz), for instance, while blues are colder hues and correspond to lower frequencies (down to 50Hz). He chose the Raphael painting in part because of the high contrasts it generated in the digital transformation. As he writes on his website:

As the camera moves around we hear the sound that all these 10,000 moving colors/frequency generators are producing. The loudness of each particle is proportional to the distance from viewer. As a result, when we pass over over Madonna’s scarlet dress, we hear the high “red” frequencies; conversely, as it scans fragments of the blue sky, we start hearing the low “blue” frequencies.

He’s also turned other paintings into soundscapes, notably Georges Seurat’s Bathers at Asnieres (1884) and Claude Monet’s Rouen Cathedral, West Facade (1894). Check out a sampling of those soundscapes in the video below.

[Via Open Culture and The Creator’s Project]