The First Space Flower Bloomed Decades Ago, Not This Week

This week was full of lessons. Lesson One: Never trust an astronaut. Lesson Two: Everyone loves flowers. Lesson Three: We’ve grown a lot of plants in space.

The first zinnias from the Veggie experiment on the International Space Station bloomed over the weekend, delighting us with their beauty and getting the internet excited about gardening amongst the stars. But we made a mistake: We trusted space-gardener Scott Kelly when he gleefully exclaimed it was the first flower to bloom in space.

The orange delight pictured above was this astronaut’s first flower to bloom, but it was hardly the first flower grown in space. We get his excitement over plucking it and taking it to the cupola to see sunlight for the very first time. We completely sympathise with Kelly’s pride and joy that his orange bloom survived despite drowning, mould, and strict procedures that just didn’t work until he overrode them. We’re a bit less forgiving of NASA getting caught up and authenticating his claim — but hey, it’s usually their job to trust astronauts.

2003: Flowering plants in space over a decade before the zinnias, and this pea plant isn’t even the first! Mea culpa. Image credit: NASA

A flower has bloomed in space as recently as three years ago. NASA astronaut Don Pettit grew plants in 2012 as a personal experiment, including a blogging space courgette and a blossoming sunflower. “I sprouted, thrust into this world without anyone consulting me,” wrote the courgette (or 'zucchini' as the Americans call them) with the assistance of astronaut Pettit.“I am utilitarian, hearty vegetative matter that can thrive under harsh conditions. I am zucchini—and I am in space.”

February 2012: Space zucchini floating between its homes by the window, and in the darkness of crew lights. Image credit: NASA

On the day it blossomed, Pettit was greedy with his botanical friend. The zucchini recounts:

One of my buds opened today and is in full bloom. Surprisingly, it does not open all the way but looks more like an inverted orange umbrella that got stuck at the halfway point. My spherical shaped stamens give off a tantalizing essence. My gardener did not tell his crewmates about this and kept me all to himself.

Pettit took the courgette flower in front of the camera for a two-way video call home on Valentine’s Day. He plucked the blossom and closed it in an Atlas, sealing it shut with Kapton tape and promising to bring it back.

The courgette had one last surprise in store for its crew, exhibiting dry wit in explaining why it was utterly inappropriate for a seed-to-seed experiment:

There was excited talk about my blossoms today. They were all looking forward to seeing little zucchinis in space. I did not have the heart to tell them one small detail. I make two kinds of flowers; male flowers with only stamens and female flowers that produce zucchinis. Being part of this all man-crew, it was fitting for me to make only male flowers.

Because the plants were a personal experiment, they were not sterilised. This led to cheerful sunflower nearly not making it, as recorded by space courgette (with typing errors corrected):

Sunflower has brown patches. His leaves are covered with dry, dark blotches. He is not happy. Gardener [Don Pettit] says it looks like a fungus. I am afraid that if something is not done we are going to lose Sunflower. The crew medical kit is designed for animals not plants so there are no medications for this disease. Gardener is treating Sunflower with a disinfectant wipe that has an antibacterial agent called BZK (Benzalkonium chloride). We do not know if this is going to work. Our spacecraft is designed for animals so life can be a struggle for plants. On the frontier, the answers are not found in the back of the book and sometimes you have to venture into the unknown and improvise.

The treatment worked, leading space courgette to first post photos the next month, then later report on June 24, 2012 that sunflower was reaching an exciting new life stage:

Sunflower is going to seed! His blossom is wilted-brown and has a few lopsided packed seeds. This is not quite normal, but then, we are living on the frontier and things are different here. They are not ready now; I wonder if they will be by the time Gardener is with his seed pod?

But that wasn’t the very first space flower to bloom, either. In September 1993, NASA gardeners sent sprouted Arabidopsis thaliana into orbit on the space shuttle for a ten-day mission (STS-51). The flowers budded and bloomed, allowing scientists to compare shapes during growth, assess pollen viability, and evaluate any changes in the mature plants. They sent the same family of plants up again and again, even doing a full seed-to-seed growth experiment (with flowers but no picturesque blooms) in 2001. 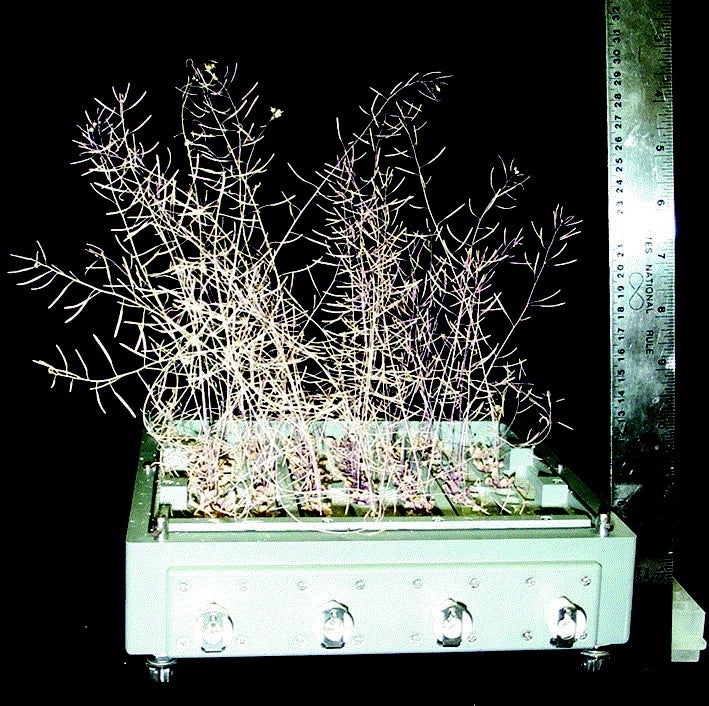 But those spindly little guys still weren’t the very first space flowers. In this, as is often the case with obscure spaceflight records, the Soviet Union led the way. Soviet cosmonauts Viktor Patsayev and Vladislav Volkov earned the title of first space gardeners for their tender care of flax plants in 1971 on Salyut 1, one of the first space stations. The pair were the first to write about the psychological benefits of gardening, with Patsayev teasing, “These are our pets.” Volkov was even more openly affectionate, declaring, “They are our love.”

Later crews on Salyut 6 experimented with different plants and watering systems. One crew grew so enamoured with their onions that they repeatedly questioned their ground-based botanist, Galina Nechitailo, about whether she really needed the entire crop. “Keep the four best onions for the experiment and use the rest as you like,” she finally relented, leading cosmonaut Alexander Ivanchenkov to shamelessly admit, “Thanks, I’ve been probing for that,” before he ate them. Yet they couldn’t quite pull off the elusive seed-to-seed success story.

March 2003: How do you get a plant to grow? By giving it a backdrop photographs of other plants to give it encouragement! Image credit: NASA

It wasn’t the cosmonauts’ fault the plants couldn’t flourish. It was the space station’s. Salyut 6 couldn’t scrub the air of all the unanticipated outgassing contaminants, stifling their growth. On the new Salyut 7 space station in 1982, they set up three new greenhouses, one with an antibacterial air filter. Cosmonaut Valentin Lebedev admitted to falling prey to the same overwatering habits of current astronauts. “I water the plants regularly, happily,” he wrote. “I spoil them; I am too generous with water.”

By August his journal turned gleeful as his overindulgence paid off. “Hurrah! A pod has burst: It spilt seeds!” he celebrated. In coaxing a batch of Arabidopsis to grow, thrive, blossom, and produce seeds all in microgravity, Lebedev became the first gardener to successfully grow a seed into a plant through germination that produced seeds again. We have no photographs to document his success, but after ten years of failures, Lebedev’s rockcress were the first plants to flower in space, over three decades before Scott Kelly’s declaration.

After its historic victory, the Soviet Union’s surge to becoming expert space-gardeners hit a series of stumbling blocks with lost modules and crashed return vessels. The greenhouses on Mir were a step back in technology, more political than scientifically interesting. But this is when international collaboration kicked off. American astronauts and now-Russian cosmonauts grew plants into seeds, resowing them for the first multi-generational crops.

Soon they switched from wheat to leafy greens, aiming to grow a garden salad instead of a loaf of bread. The astronauts became more skilled, arguing back with their terrestrial botanists about how to best care for their plants. Soon they had a crop of leafy Brassica rapa. NASA never cleared their space-gardener Peggy Whitson to munch on the field mustard, but her hand sneaks into a photograph of cosmonauts enjoying the fruits of their labours.

Consistently, astronauts revealed surprisingly strong emotional attachments to their plants. Spending time with the plants wasn’t a chore; it was a reward. Returning to the blogging courgette, we learn that astronauts were even willing to take on the unpleasant tasks for time with its leafy greenness. “I am becoming quite popular,” wrote the courgette through Pettit. “I heard one say that he would vacuum the HEPA filters for my gardener if he could have five minutes with his nose close to me.”

These positive boosts to moral have been noted again and again with every little hint of green that sprouted in microgravity. Although the earliest research was driven by botany, today’s experiments also serve to investigate the psychological impact that on-orbit gardening has on astronauts. “The farther and longer humans go away from Earth, the greater the need to be able to grow plants for food, atmosphere recycling and psychological benefits,” Veggie science team lead Gioia Massa said in a NASA press statement.

June 2007: Cosmonaut Fyodor Yurchikhin might have the tiniest crush on his sprouting garlic. Image credit: NASA

If we’re going to send humans to explore deep space, to go beyond the Moon and out to Mars, we’re going to need to keep training space-gardeners. “I don’t see future space crews leaving the Earth for long durations without having the ability to grow their own food,” explains engineer Shane Topham in another NASA press statement. “The knowledge that we are gaining is enabling us to extend our exploration and future colonization of space.”

So here’s to the field mustard, the rockcress, the flax, the sunflowers, the lettuce, and yes, the zinnias, too. May you grow strong, little plants, prosper and flourish. Reproduce and be eaten by our astronauts. Pave the way for us to explore the stars.

Top image: The first space zinnias. Credit: NASA/Scott Kelly. Thank you to our lovely commentors MoriartiMariachi and SciNews, who politely yet firmly taught us about a gap in our history of space gardening.