Several years ago, the Mythbusters famously tried to separate two thick phone books with pages tightly interleaved. They couldn’t do it. Scientists know it’s due to the enormous amounts of friction being generated, but precisely how this friction arises is a longstanding mystery. A new paper by French researchers concludes that it all comes down to the number of pages, their thickness, and the size of the overlap (contact) region between sheets.

Studies of friction date all the way back to the 15th century, when Leonardo da Vinci wrote journal entries describing his experiments with various objects sliding along an inclined plane. Guillaume Amontons and Charles August de Coloumb built on that work in the ensuing centuries, and physicists have continued to refine their understanding of the laws of friction ever since. 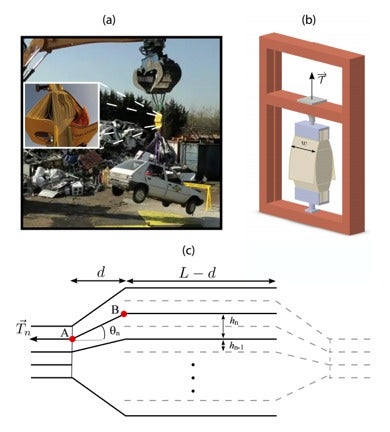 Most of us immediately think of abrasive friction — the kind that’s produced if you rub a wood block over sandpaper, for instance. But there is also adhesive friction, like how rubber bonds with asphalt. Think of getting chewing gum stuck to your shoe on a hot day; every time you take a step, the stickiness of the gum slows you down a bit. When it comes to interleaved phone books, the friction is so strong, it can lift a car off the ground.

Hector Alcaron and Frederic Restagno, both with the Universite Paris-Sud, teamed up with colleagues to devise a mathematical model that could resolve the mystery once and for all. They took pairs of booklets of varying thickness (between 12 and 100 pages) and interleaved them, measuring the force being exerted as they tried to separate the booklets.

They just published their findings in Physical Review Letters. In particular, they found that even a slight increase in the number of pages had a dramatic effect on how much force was required to separate the phone books. The same was true when they increased the area of overlap (contact between pages). Both factors influence the angle of those parts of the sheet closest to the spine. The steeper the angle, the greater the force needed to separate the pages. And the more pages there are, the steeper that angle will be. As David Ehrenstein writes at Physics Focus:

The key to the effect is that the pages are not parallel as they fan out from the binding toward the overlap region, so that the book-separating force on each page is applied at a slight angle. Because of this angle, the separation force contributes to the “normal” force that is perpendicular to the pages. This small normal force resulting from pulling on each page contributes to the force on every page below, so the total normal force (and thus the friction) on a single inner page can be much larger than one might expect.

And there you have it. The same principle can be seen in a Chinese finger trap — the kind that tightens around the finger if you try to pull it out — and in how sailors moor a ship by wrapping a thick rope around a capstan.