All the Coolest Stuff From Toy Fair 2016

If January’s CES is the main course when it comes to trade shows, February’s New York Toy Fair is the dessert you can’t wait to dig into afterwards. The world’s biggest toymakers converge on the Big Apple to reveal everything that kids — and collectors — will be dying to buy for the rest of the year.

This year we layered up to face a sub-zero New York City and meticulously combed the halls of Toy Fair 2016 to track down the standout playthings. Here’s the best of what we found. 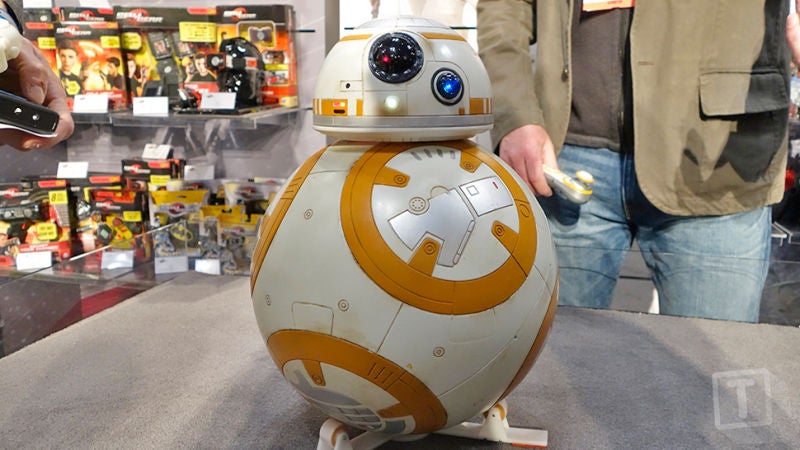 Not since R2-D2 has a Star Wars character spawned as many tie-in products as The Force Awakens’ BB-8. But there’s still room in our hearts — and our shelves — for another BB-8 toy, especially since Spin Master’s near life-size replica talks, rolls, follows, blinks, understands voice commands, and even comes when it’s called. At just $180 (around £126) it’s priced similar to other BB-8 toys that have already sold millions. 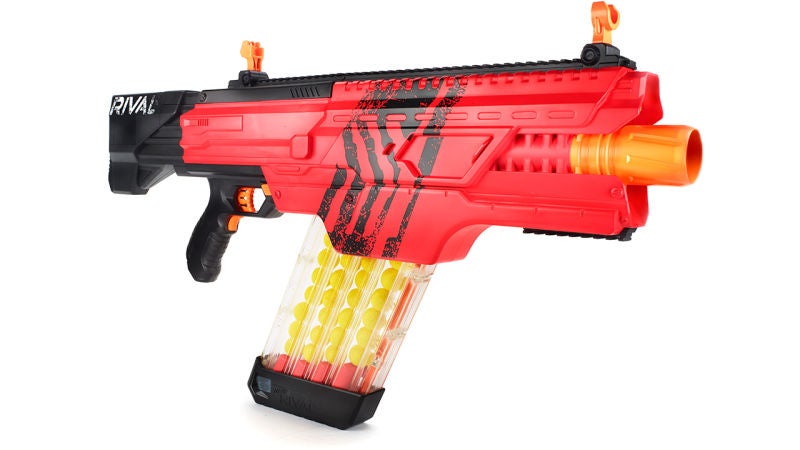 Designed with teenagers in mind who demanded something more exciting than flying foam darts, Nerf has expanded its line of Rival blasters with its first fully-automatic model, called the Khaos MXVI-4000. Given how many Nerf fans hacked the original Rival blasters to be fully automatic, it’s no surprise that Hasbro followed suit with an official model for those of us lacking any hacking skills. 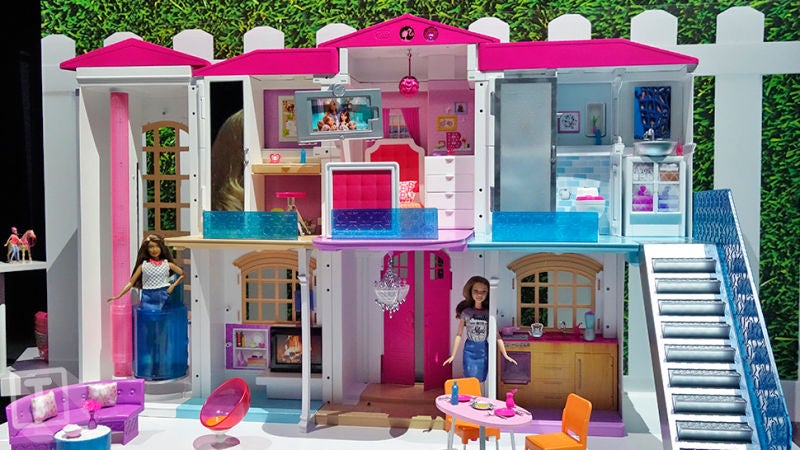 Instead of addressing the privacy concerns raised by the original Hello Barbie, Mattel has instead come out with a sprawling mansion for the doll that also listens and responds to children’s requests using a wi-fi connection to the internet. Privacy concerns aside, it’s admittedly pretty cool to see the Barbie Hello Dream House come to life using just voice commands, we wish our offices did the same thing. 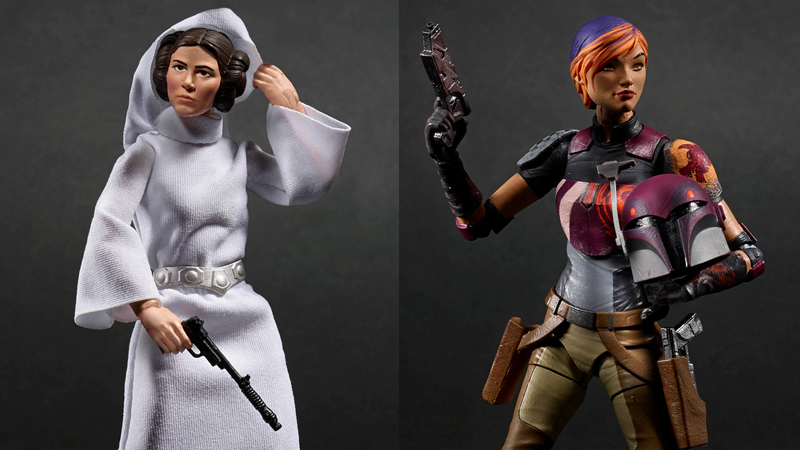 Hasbro’s new Star Wars figures were surprisingly light on The Force Awakens characters, but the company gave fans and casual toy-buyers something they’ve been wanting for ages: fantastic figures of the saga’s beloved female heroes. Even the reveal of the figure for fan-favourite video game star Revan was outshone by new figures of Star Wars Rebels’ Sabine and the A New Hope version of Princess Leia, which is hopefully a sign of plenty more female characters heading to Star Wars toy shelves in the future.

The ultimate goal of Monopoly isn’t to secure and then build hotels on Park Plane and Boardwalk, it’s to find a way to cheat your fellow players into bankruptcy. But now that Monopoly Ultimate Banking Edition comes with a tiny ATM to handle all financial transactions, you’ll suddenly have to start playing by the rules again. On the plus side, it should also help speed up the game immensely.

Ever since the death of Sony’s robot AIBO dog, Spin Master’s Zoomer line has stepped up to fill the role of artificial pets. And now in addition to robotic dogs, cats, and even dinosaurs, the Zoomer line will soon include a robotic chimp that can crawl around on all fours, stand and balance on two feet, or fall down and shake its butt at you in the air. That ticks off everything on our wish list. 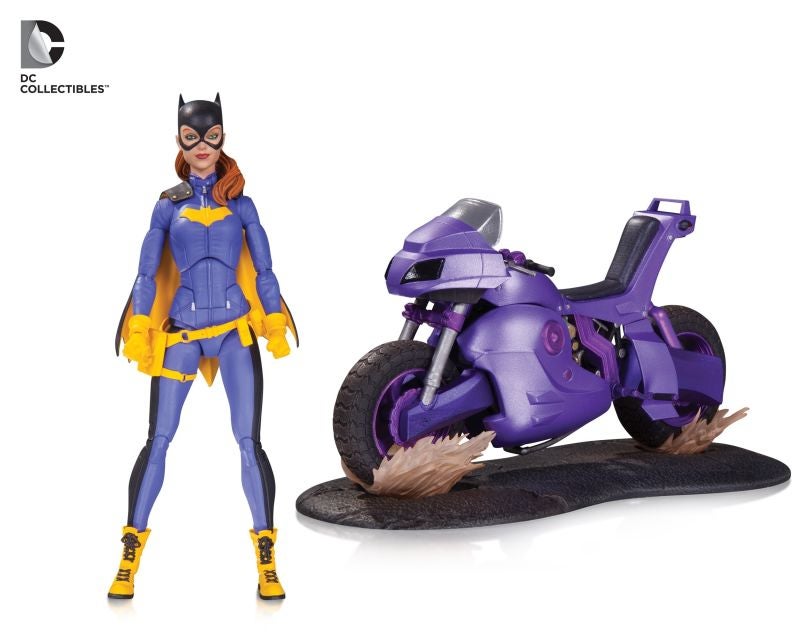 DC had a bunch of amazing new toys at the show this year, but even with a Batwing toy the size of a man’s torso, we’re most excited for the first ever action figure of Babs Tarr, Cameron Stewart, and Brenden Fletcher’s updated take on Batgirl. Not only is it the first figure of this slick, modernised design, Barbara even comes with a snazzy, revved-up bike to ride around on. 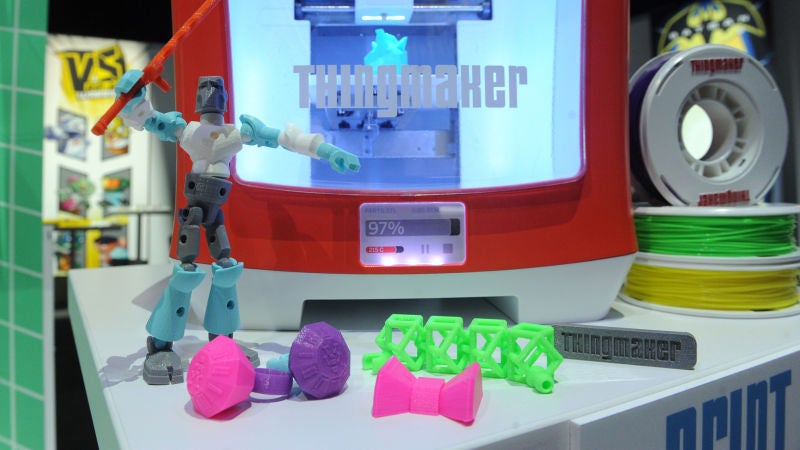 The complexity of designing models and dealing with all of the peculiar nuances of the hardware have kept 3D printers a tool for hobbyists and professionals. But Mattel and Autodesk are hoping that by reviving the ThingMaker brand as an easy-to-use, toy-making 3D printer at a $300 (around £207) price point, they can finally get them into every home. Or you know, at least the ones with kids in them.

Go dig up your parent’s or grandparent’s original Simon toy and you’ll probably find its four coloured pads covered in years worth of grimy fingerprints. Gross. That will never happen with the latest version of the memory-testing game, Simon Air, because motion sensors mean players never actually have to touch it while recreating complex patterns. The new Simon introduces new actions and gameplay challenges. 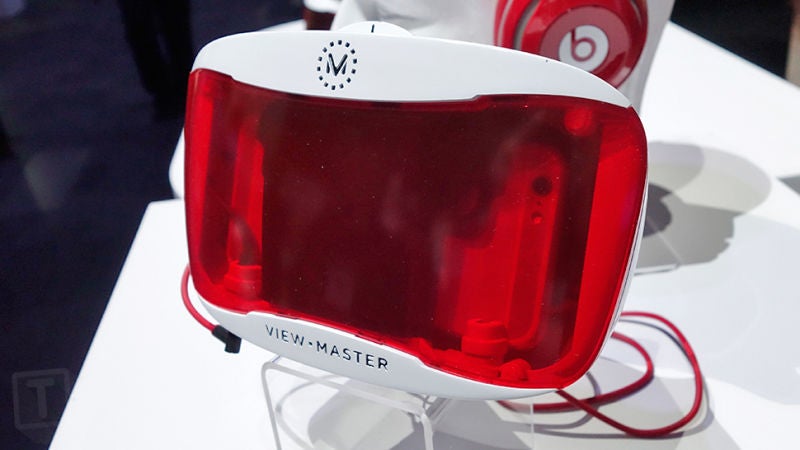 Last year, Mattel introduced it as a modern take on the classic 3D viewer toy, but the new VR View-Master quickly became one of the best Google Cardboard solutions available. There were a few minor usability issues though, which Mattel has fixed with the new and improved View-Master Viewer DLX that can accommodate more devices. 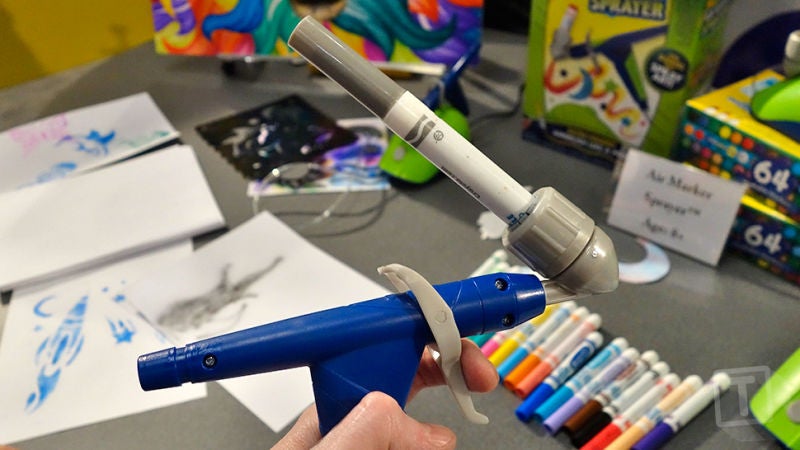 No one knows how glamorous Banksy’s life must be, because no one knows who he is. But if you’ve ever wondered what life as a graffiti artist is like, Crayola’s updated Air Marker Sprayer can give you a taste, without breaking the law. Using an electric pump it turns Crayola markers into an airbrush, or a can of spray paint, without the need to keep working a manual pump. The keywords here are: Washable markers 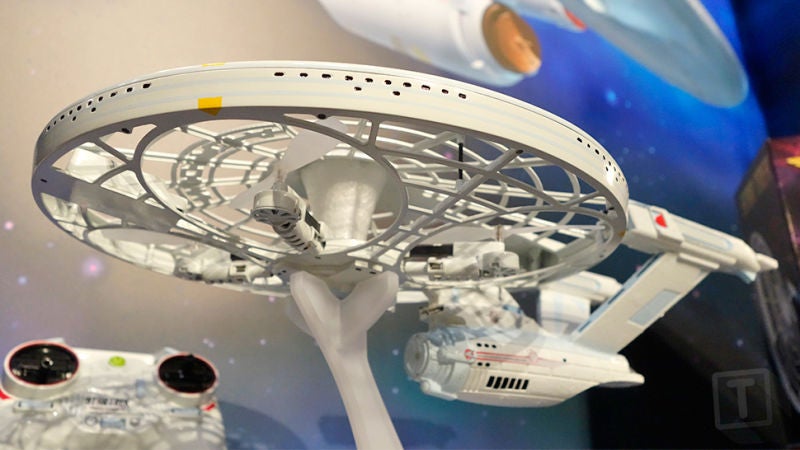 It’s no surprise that a new Star Wars movie ushered in a mountain of new Star Wars toys. But with the 50th anniversary of Star Trek hitting this year, Trekkies will soon be just as blessed when it comes to tie-in toys, starting with a remote control drone version of the USS Enterprise that actually flies. It won’t hit even warp one, but it can explore the farthest reaches of your bedroom. 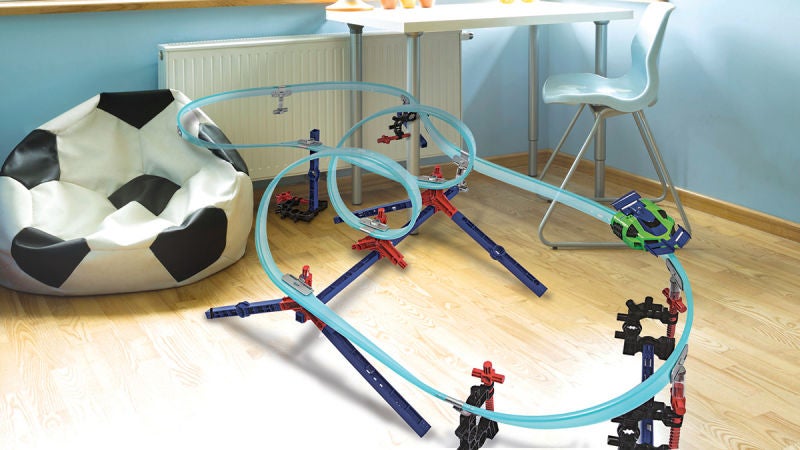 If you were born less than 40 years ago, you’ve probably got limited experience with model trains. To entice a new generation to buy its products, Lionel’s new Mega Tracks turn model trains into slot cars with a flexible track system and sporty-looking monorails that can race through loops and other impossible twists you’d never want to try on a regular train. 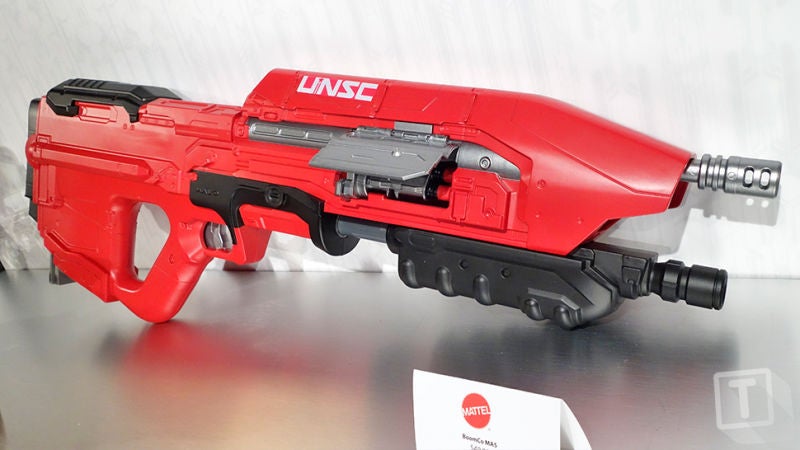 Mattel’s BOOMco line might not be as expansive as it was over the past couple of years, but that’s because the company is focusing on licensed products including the vast array of weaponry seen in the countless Halo games. The latest fictional weapon to get the BOOMco treatment is the iconic UNSC MA5 blaster from Halo. Now aspiring Master Chiefs can prepare themselves for an imaginary Covenant invasion. 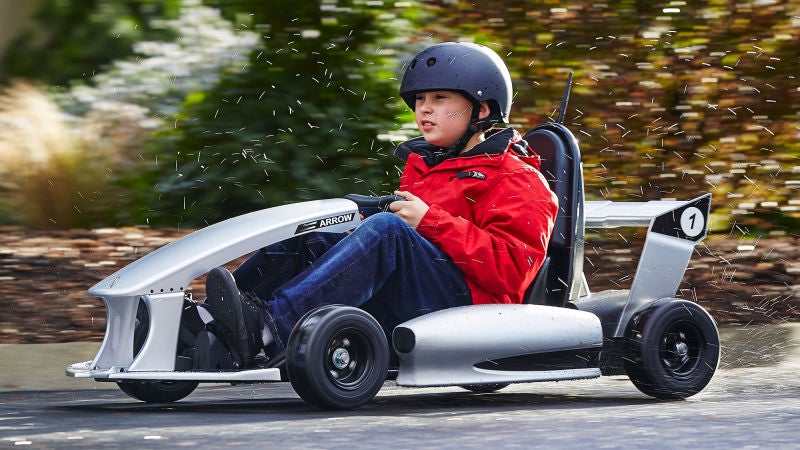 Toy Fair can often be disappointing because there are so many great products designed and engineered specifically for kids that grownups won’t ever get to use. Such is the case with the Arrow Smart Electric Go-Kart. Packed with innovative safety features, it zips along at 12 miles per hour unless remotely limited by a parent’s smartphone. It can actually support the weight of most adults, but those tiny seats mean that grownups will unfortunately have a tough time taking this ride for a spin. Bummer.

Inline skates are certainly less silly-looking than roller skates, but neither are as subtle as Razor’s new Jetts that give almost any shoes a pair of back wheels. You can still walk while the Jetts are strapped to your feet, but why would you when you can instead zip across the pavement on your heels? The Jetts also come with an accessory that leaves a trail of sparks behind you, making you feel like you have afterburners blasting.

First announced way back in August of last year, Sphero’s SPRK Edition — an educational tool letting kids and hobbyists reprogram the remote control rolling sphere — was quickly over-shadowed by the arrival of the company’s tiny BB-8. But Toy Fair was our first opportunity to get some real hands-on time with the Sphero SPRK, and we walked away beyond impressed with what kids could do with it.

Amateur coders can program the SPRK using a drag-and-drop graphical interface in the app, but as they get more experienced they can also mess around with the raw code. And because they have access to all of the extensive data from the Sphero SPRK’s onboard sensors, it’s actually quite remarkable how complex a custom program can be. STEM (science, technology, engineering, and math) has become a buzzword that too many companies are slapping on toys with little educational value, but if we managed to learn something during a quick demo, it’s that there’s no telling what a kid might discover with this little marvel.