Don't Let These Horror Stories About Turbulence Keep You From Flying

The internet is filled with butt-clenching stories of horrifying plane turbulence lately. Is dangerously rough air becoming more common nowadays, or what? Well, yes and no.

Despite the scary news stories and terrifying viral videos, take a deep breath and board your next flight without fear. Even though turbulence might be increasing due to climate change, it’ll take a few decades before we’ll really notice the effect. Besides, modern jets are built to last: “In all but the rarest cases, even the most violent turbulence will not seriously damage an aircraft or cause it to crash,” says active pilot Patrick Smith, author of Ask the Pilot and who’s blogged about aviation since 2002.

All that said, turbulence is undoubtedly scary and certainly dangerous in some albeit rare circumstances. When you’re lurching in a thunderstorm at 40,000 feet in the air in a pressurised metal tube with nothing but a carry-on and your prayers, turbulence is no joke. Last year, I wrote about my own trouser-wetting nightmare that left me with some enduring flight anxiety.

You’ve probably seen some of these nightmarish accounts yourself, thanks to social media. Back in September, for example, an EgyptAir plane hit turbulence that injured 12, and another 40 passengers were injured in Manila after a Qatar Airways flight ran into extreme airborne bumpiness. Last month, passengers aboard an Air Canada jet described “all hell breaking loose” when the Shanghai-to-Toronto flight made an emergency landing amid extreme turbulence that sent passengers flying out of their seats and 21 of them to the hospital in Calgary. And just days ago, angry skies sent seven people to the ER when Milan-bound American Airlines 206 from Miami made an abrupt detour in Newfoundland, Canada. Oxygen masks fell, people passed out, and left one passenger saying, “I thought that was it.”

That’s not including other airborne horrors from earlier in 2015 and 2014 that international news organisations plastered across their papers and websites. What's the big idea? Is the media just riding the attention train into the sunset? Or are terrifying flights becoming the norm — and if so, why?

Pilot Smith conceded to Gizmodo that, at least anecdotally, the amount of turbulence does seem to be increasing. The emphasis here, however, should definitely be on the word seem, since more reports of severe turbulence do not necessarily mean you’re at greater risk of experiencing it on your next flight.

“First, there are more planes in the sky than ever before,” Smith told me. “Worldwide, the number of people flying — and the number of jets carrying them — has basically doubled in the past 25 years or so.”

So statistically, we’re bound to see more reports of turbulence. There are some atmospheric issues at play too, though.

“It stands to reason that as climate change intensifies, resulting in more powerful jet streams, stronger high-altitude winds and increasingly potent storms, turbulence will intensify as well,” explained Smith. “We may be seeing this already.”

Indeed, we are, and there’s solid data that shows the trend. Two years ago, UK researchers published a paper in the journal Nature Climate Change that projected plane turbulence over the Atlantic Ocean would increase by 2050. As the effects of climate change worsen, turbulence described as at least “moderate” could crank up from as little as 40 per cent to a whopping 170 per cent increase.

“Scientists will never be able to blame climate change for causing a particular turbulence encounter,” co-author Paul D. Williams, a professor at the University of Reading, said in an interview. “What we can say, however, is that climate change is gradually making these encounters more likely, at least on some flight routes.”

What’s causing the injuries in recent news stories is known as “clear-air turbulence”. This particular type of turbulence is especially problematic, since it’s not necessarily weather-related at all. Clear-air turbulence also can’t be seen on radars ahead of time, so pilots can’t always account for it. That’s why we’re always told to remain seated with our seat belts fastened, even if the light is turned off. 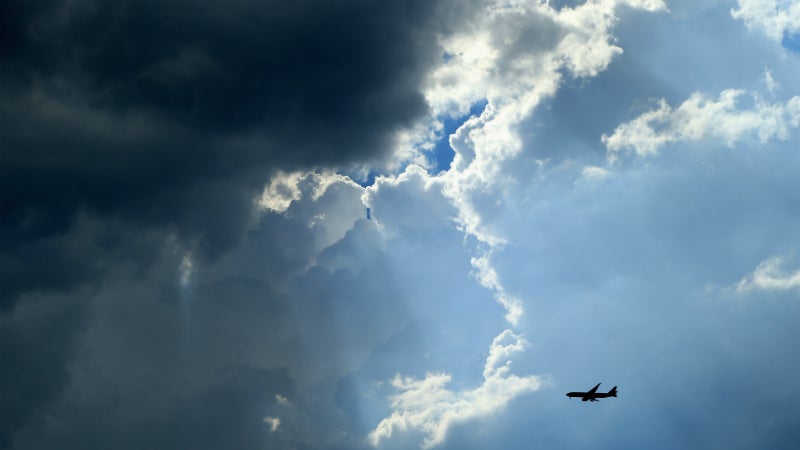 Pilots can spot storm clouds like these on radar. Most of the turbulence that prompts emergency landings, however, is invisible to technology. Credit: Richard Heathcote/Getty Images

How dangerous is turbulence, actually, if dozens and dozens of people are being greeted by ambulances upon emergency touchdown? The US Federal Aviation Administration’s (FAA) most recent numbers report that, between 1980 and 2008, there were 298 “serious injuries” and three fatalities because of turbulence. The majority of those injured — 184, to be exact — were flight attendants, who are usually up and about and not buckled up. Williams also explained that clear-air turbulence is strongest in the winter. So, for those of us in the northern hemisphere, it’s normal to see spikes in the turbulence stats from December to February.

But about the hype element: Another very likely explanation for the spike reports of severe turbulence is our compulsion to use handheld technology to document near-death encounters has something to do with it. As Williams said, “The advent of smart phones and tablets means that many severe turbulence encounters are now filmed by passengers, which adds to the newsworthiness.”

With all our new technology, can’t we do something to help avoid turbulence? When turbulence grounded that American Airlines flight on January 15, ABC News reported that the airline was to install new radar software on its jets that could help pilots more easily spot smooth paths in storms. That still doesn’t take care of that pesky turbulence of the clear-air variety, but it’s a start.

So when you log onto Facebook and see another severe turbulence story, don’t panic. More news stories doesn’t mean more threats – at least, not right now. And remember, even the most violent turbulence isn’t enough to damage a plane, let alone take one down. In nearly all cases, turbulence’s bark is worse than its bite.

One last word of advice from Smith: “Remember, most people injured in these encounters are hurt because they did not have their seatbelt fastened when they should have.” So at least there’s only thing you can control.