How Your Genes Influence Whether You're a Morning Person

A DNA analysis of nearly 90,000 23andme customers suggests our preference for early mornings may be rooted in our genes. The study also suggests that night owls are at greater risk of depression and other health issues. But those findings come with a couple of caveats.

The new study, published in Nature Communications, highlights 15 different genetic variants associated with being a morning person, including traits associated with narcolepsy, prolonged REM sleep, and extended circadian rhythms. What’s more, “morningness”, as it’s being called, was also linked to healthier outcomes as it pertains to depression and body mass index. So-called night owls, the data suggests, are at heightened risk of experiencing depression and obesity, though the researchers presented no actual causal evidence to support the claim.

The 23andme researchers looked at the DNA of 89,283 customers who consented to having their genetic information used in the study. These customers also answered a questionnaire about their sleep preferences and proclivities. It’s considered one of the largest genome-wide association studies of its kind, and a potent example of how private companies can conduct meaningful scientific research. It’s also not the kind of study that would normally get funding.

“With the information we have, we can uncover the genetics behind a variety of conditions and diseases, and hopefully reach a better understanding of how we differ from one another,” noted 23andme senior researcher David Hinds in a press statement.

That said — and as this Wired article points out — 23andme has a vested interest in this line of sleep-related research; the company recently made a deal with Reset Pharmaceuticals to develop drugs targeting the body’s circadian rhythms. So it would appear that this company, with its customer’s consent, is conducting R&D with user-provided information. Definitely a sweet deal.

The researchers found that morning-persons are likely to have a lower BMI, even after adjusting for age and sex. They also found that most people (upwards of 56 per cent) describe themselves as night owls. Women and adults over 60 years of age are more likely to be morning people, while morning people in general suffer less from insomnia, and typically need more than eight hours of sleep each night. And as noted, they’re also less likely to suffer from depression than night owls. 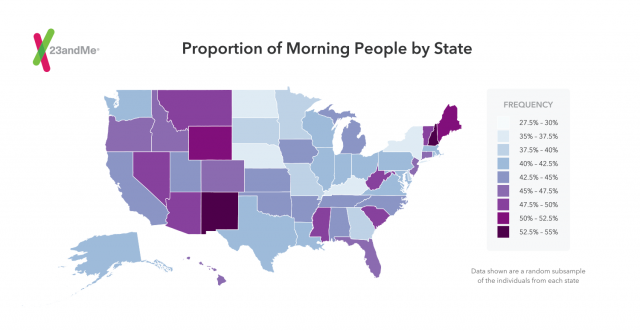 This study suggests that our personal circadian rhythms are an innate biological function, one with trickle-down effects to other biological and psychological processes. These insights will improve our understanding of sleep, and hopefully lead to improved interventions for those suffering from sleep disorders. It could also help scientists get a handle on depression and obesity.

Finally, it’s important to point out that this study, which relied on customer self-reporting and correlated data, does not mean that your sleep preferences are exclusively dictated by your DNA. At most, your genes are probably influencing your sleep/wake habits in conjunction with many other environmental and social factors. [Nature Communications]