It's Time to Declare War on Mosquitoes

Zika is now a global emergency, and the latest in a long string of mosquito-borne viruses to afflict humanity. Mosquitoes truly suck, and the time has come to do something about them. Here’s how science will help — and why a war on mosquitoes doesn’t mean we have to wipe them off the face of the planet.

In combat sports, there’s a temptation to come out as hard and fast as possible. But as practitioners of Brazilian Jiu-Jitsu will tell you, it’s often better to use your opponent’s weight and strength against them. When it comes to combatting mosquitoes, it would be wise to adopt a similar approach. Rather than trying to wipe these creatures off the face of the planet, as some cranky commentators have suggested, we need a bit of Jiu-Jitsu. And that Jiu-Jitsu will come in the form of effective population control measures and the latest that genomic technologies have to offer.

It’s been said that mosquitoes have indirectly killed more than half of all humans who have ever lived. That’s more than war, plague, famine, and heart disease. Each year alone, malaria kills an estimated two million people, and experts fear the death toll could double in the next two decades. Other mosquito-borne diseases, such as dengue fever, chikungunya, and yellow fever, are also on the rise, putting some 3.2 billion people at risk. And now there’s Zika to contend with, a disease that’s been linked to birth defects. Climate change, global travel, and rapidly growing urban centres are making the problem worse.

“As flying syringes, mosquitoes are particularly adept at spreading disease; Zika is just the latest in a long list,” noted Kevin M. Esvelt, an assistant professor at MIT and leader of the school’s Sculpting Evolution Group, in an email to Gizmodo. “Many of these are also environmentally damaging invasive pests.”

Some people want to eradicate mosquitoes entirely, or at least kill off a sizeable portion of them. It’s a tempting proposition, and a radical one, but it would also mean ecological turmoil. Mosquitoes are a critically important food source for fish (who eat their larvae), and many species of birds, dragonflies, spiders, salamanders, lizards, and frogs. All these animals would suffer if mosquitoes disappeared, possibly resulting in a number of unforeseeable downstream ecological effects. But the fact is, we’re not entirely sure what those would be.

“Mosquitoes are part of shared ecosystems,” Esvelt said. “A handful of studies have suggested that altering or even eradicating the most dangerous species probably wouldn’t cause any ecological harm simply because there are so many others, but we don’t know if that’s true everywhere — it likely depends on the species and type of change.” 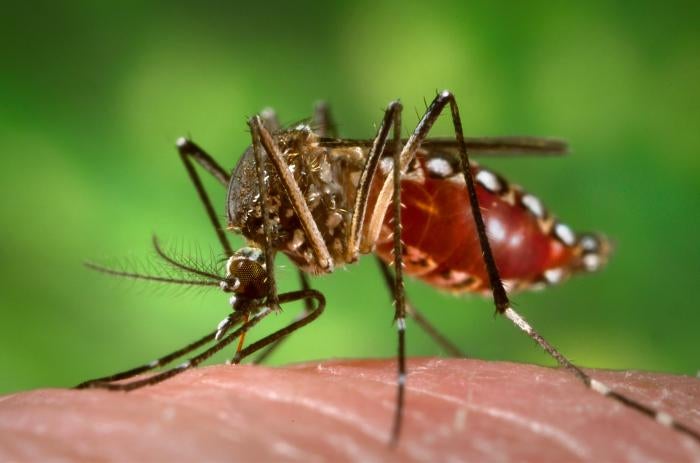 Aedes aegypti during a blood meal. Via CDC.

There’s also the practical issue of how we’d drive the pests to extinction. Mosquitoes, of which there are 3,500 individual species, exist on every continent except Antarctica. They’re small, voluminous, and incredibly hearty. All they need is a source of standing water and a steady supply of blood. They’re also resilient, adapting quickly to drugs and insecticides. Importantly, as Esvelt pointed out, “only one mosquito species in a hundred can efficiently spread human pathogens”.

Even if we eliminated every mosquito from a designated area, it would still leave a highly favourable biological niche for neighbouring mosquito populations, or some other species. As entomologist Joe Conlon of the American Mosquito Control Association has said, “If we eradicated them tomorrow, the ecosystems where they are active will hiccup and then get on with life. Something better or worse would take over.” It’s that “worse” thing — the devil we don’t know — that frightens ecologists.

One key mosquito control strategy is to destroy the places where mosquitoes lay their eggs. This suppresses populations instead of eradicating them.

Over the course of their short lives, mosquitoes only venture about 120 yards (180 metres) from where they’re born. This means their breeding areas are never far from where people are bitten. So eliminating potential breeding grounds, which can include bird feeders, old tyres, flower pots, standing vases, clogged roof gutters, and so on, can immediately curtail populations.

In cases where standing water cannot be dumped or drained, it’s possible to suppress mosquito populations by introducing insecticides, larvicides, and other chemicals. One example is Bacillus thuringiensis israelensis (Bti), which is toxic to mosquito larvae. Mosquito traps, like ovitraps, are another option. These traps mimic mosquito breeding sites, but contain toxic chemicals. This approach has successfully controlled Aedes aegypti and Aedes albopictus mosquitoes, both of which are carriers of some of the worst diseases. 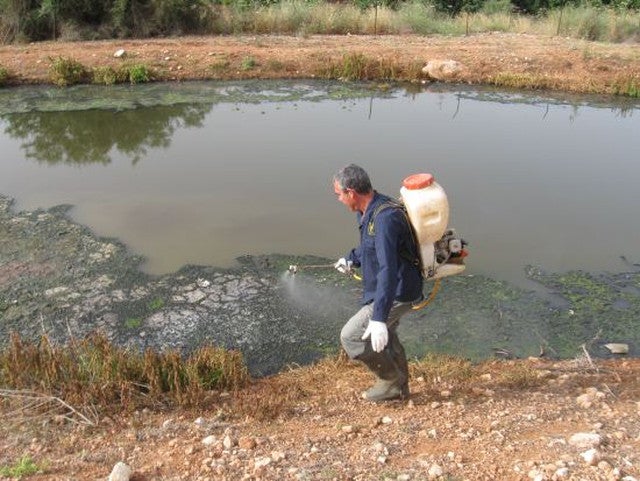 Population control measures can make a dent, but the most meaningful interventions will come from genetics. Not only will biotechnology help us shrink mosquito populations, it’ll allow us to build better mosquitoes — or at least mosquitoes that are friendlier to human existence. 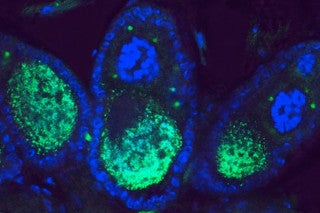 One particularly promising approach is to use mosquitoes themselves as agents of disease control. Some mosquitoes, like Aedes albopictus, are prone to infection by a bacterium called Wolbachia. This microorganism not only interferes with their lifespan, it also impairs their ability to spread diseases. Scientists have shown that it’s possible to artificially infect large populations of Aedes aegypti mosquitoes with Wolbachia, which inhibits their ability to spread dengue — but not their ability to transmit Wolbachia to other populations. What’s more, modified males have trouble reproducing with unmodified females, so this strategy also works as a method of population control.

Another approach is the creation of “autocidal” mosquitoes. Geneticist Anthony James from UC Irvine, with the help of UK-based biotech firm Oxitec, has found a way to create flightless female mosquitoes. When these GM mosquitoes hatch on the water, the males depart, but the females, unable to fly, are left behind. Unaffected males move on and intermingle with an unaffected population of mosquitoes, passing on the genetic mutation in a process known as “genetic sexing”. 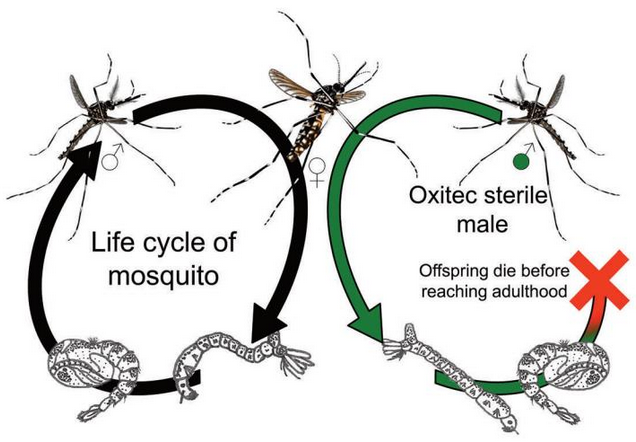 This strategy has already been deployed in areas where mosquito-borne diseases are a problem. In 2011, Oxytec released 6,000 transgenic mosquitoes in Malaysia in an effort to drive down dengue fever. An earlier experiment in Grand Cayman resulted in an 80 per cent decrease in mosquito numbers. A similar plan is now being considered in Florida using the same technique.

Another option is bioengineered bacteria. Geneticist Marcelo Jacobs-Lorena and his team at Johns Hopkins Malaria Research Institute have developed anti-malarial transgenic bacteria that exist in the gut flora of mosquitoes. Once released into the wild, and with their bellies full of the GMO bacteria, these mosquitoes pass on their resistance from one generation to the next. “This research is expected to lead to the development of a novel weapon that can be used in combination with traditional control strategies (drugs, insecticides, vaccines) to combat malaria,” wrote Jacobs-Lorena in a recent study.

Similarly, Weiguo Fang of the University of Maryland has developed a chemical that contains a fungus loaded with a compound found in scorpion venom. Fang has modified the fungus to attack malaria parasites inside infected mosquitoes, while also causing physical impairments to mosquitoes themselves. Fang’s strategy has been shown to reduce the number of parasites in mosquito saliva by as much as 98 per cent.

Coming up with these high-tech solutions is one thing, but getting mosquitoes to spread these newfound traits is another. As Charles Darwin explained 150 years ago, animals evolve excruciatingly slowly, and mutations will only “stick” if environmental pressures are favourable. But it may be possible for scientists to coax the process along using what’s known as a “gene drive”.

“Gene drive offers a way of altering, reducing, or even eliminating these deadly mosquitoes in the wild by ensuring that genomic changes are preferentially inherited by offspring,” Esvelt told Gizmodo. “CRISPR gene drives capable of affecting the worst offenders are nearly within our reach.”

On average, genes have about a 50 per cent chance of being inherited, but some preferential genes can be altered to have a heightened chance of being passed on. These genes can still proliferate in a population even if they reduce a species’ overall reproductive potential. Scientists would like to genetically modify animals in the wild by adding, removing, or introducing entirely new traits and capacities. Obviously, scientists can’t go out and physically modify each and every animal, but they can “drive” a gene through the population using a select number of transgenic organisms created in the lab.

The beauty of this technique is that modifications are spread by the mosquitoes themselves. Researchers have already figured out a way to create mosquitoes that produce an overabundance of males, which works to reduce their numbers. Other traits, like an immunity to Zika and dengue, could likewise be “driven” into wild populations of mosquitoes. Over time, the human-designed mosquitoes should replace the original ones.

How modified genes can be driven through a population. “By ensuring that the gene is almost always inherited, the gene drive can spread the altered gene through a population over many generations, even if the associated trait reduces the reproductive fitness of each organism,” write the authors in Science. Via Kenneth A. Oye et al., 2014, Science.

Gene drives are nearly ready to be launched in areas where mosquitoes are most problematic. In anticipation, the WHO Special Programme for Research and Training in Tropical Diseases has issued guidelines for evaluating GMO mosquitoes, while the European Safety Food Authority has compiled a six-step protocol for assessing the environmental impacts of modified organisms. But regulatory gaps persist, leading Harvard geneticist George Church, MIT social scientist Kenneth Oye, and other US researchers to demand increased oversight. Writing in Science in 2014, the researchers called for stricter regulations in containment, testing, controlled release, and monitoring of gene drives.

“Given the rate at which gene drive technology is advancing now that we have CRISPR, we need to perform these safety studies as soon as possible, and engage in public discussions of whether, when, and how to intervene even sooner,” said Esvelt. “What level of support is needed? What if one country strongly supports engineering mosquitoes to save their children, but their neighbours don’t want to risk using a gene drive? How do you reconcile that fundamental conflict?”

In an email conversation with Gizmodo, Church added that a great deal is known about the biology and ecology of Aedes mosquitoes and that other non-gene-drive techniques, such those being deployed by Oxitec, are already protecting us from viruses. “We need broad societal brainstorming,” he wrote, “and critical consideration of potential risks, benefits, resistance, and timing of the various options.”

There’s no magic bullet. Rather, experts agree that a multifaceted approach is the best option, while making sure we don’t compromise our environment and health in the process.

“We need early discussion, transparent research, careful safeguards, community guidance, and a ample helping of humility if we’re going to build a responsive model of science capable of handling gene drives and other ecological interventions,” Esvalt said. “The bottom line is that we must balance the moral imperative of reducing human suffering against the unknowns, and do so together.”