We think of superhero weaknesses as being fancy or complicated — radioactive fragments of their old home planets, or the people they love. And that’s why superheroes win. In fact, most superheroes have super-obvious weak points. Here are 10 obvious superhero weakness that villains almost never attack. 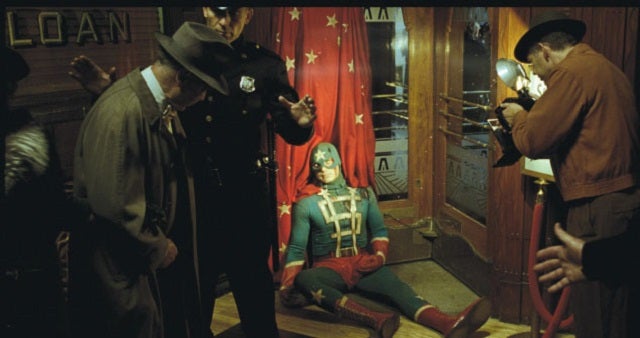 Capes aren’t the best accessories to sport in the midst of combat. They conveniently double as nooses, tend to get caught on nearby architecture, and generally impede what would otherwise be graceful movement. But villains seldom use wind tunnels or hooks to take advantage of this handy feature. One exception involves the sad tale of Dollar Bill’s death in the Watchmen universe. An in-house superhero for a local bank, he gets his cape caught in a revolving door while trying to stop a robbery and ends up shot before he can pull it free. Given the number of caped superheroes running around, surprisingly few villains have followed the bank robbers’ example.

Numerous superheroes carefully ensconce their entire bodies in armour but neglect to cover the lower halves of their faces. This oversight would likely make secret identities that much easier to deduce and, most importantly, give foes an obvious spot to target with weapons and bare hands alike. Yet, for every swipe Catwoman takes at Batman’s vulnerable face, there are a thousand enemies who choose to empty their guns into his armored chestplate instead.

Several superheroes require the power of speech to deploy their destructive capabilities, remaining relatively defenseless until they manage to do so. A nefarious type could gag or otherwise silence them and they’d be conveniently de-powered. Zatanna, for example, needs to be able to cast her spells out loud. And she probably needs to be able to hear herself talk, too. Creating white noise, or otherwise gagging Zatanna, is a tactic that was tried a couple of times in the Silver Age, but not recently.

As The Man of Steel showed, it takes a lot of concentration for Superman to handle all the sensory input he receives. And the human brain, in general, is trained to block out most of the information that it takes in, says Suveen Mathaudhu, an assistant professor in the department of mechanical engineering at University of California - Riverside. So you could overwhelm a hero who has super-senses, with a series of “flash-bang grenades,” and the hero would be completely disoriented, says Mathaudhu. “With the emergence science and discovery of metamaterials, it would be easy for a villain to engineer all manner of distractions (sound, light, energy…) and at the same time cloak potential dastardly deeds,” he adds.

Thick masks and helmets limit peripheral vision. Masked and entirely human heroes like Batman shouldn’t be able to see attackers sneaking up on them from the sides. For that matter, a hardened cowl doesn’t do wonders for the wearer’s hearing either. All your average ninja needs to do is sidle up quietly to the hero while he’s perched on a rooftop and busy surveying the city below.

Much of what makes Spider-Man and other swinging heroes dangerous depends on the availability of architecture to swing off. So if you wanted to fight a hero who’s used to swinging from buildings, the best plan would be to lure him or her to a wide open space, with no buildings or trees for him to bounce between. This would massively reduce the hero’s tactical advantage, although Spider-Man would still have his agility, strength and relative durability. With no place to hide and dramatically reduced mobility, the good guy would have a tougher time fending off a band of heavily armed supervillains. Also, Spider-Man would look fairly ridiculous standing in the middle of an empty field.

You can strengthen your muscles all you want — but your joints are going to face certain inherent constraints, says Sebastian Alvarado, a post-doctoral research fellow in biology at Stanford University who’s studied the science of superheroes. Alvarado tells io9:

The way our muscles work is a lever system as much as anything else, [and] you need a very large cross-sectional system in order to be able to lift very large objects. The fact that Spider-man or Superman can lift heavy objects without that kind of cross sectional area [means that] the kind of pressure being put on specific joints would create fatigue in those joints.”

When the Hulk picks up a car, his extra size means that he has extra muscle and bone surface area to distribute the weight along. But when Superman or Spider-Man picks up a car, all of that weight is being distributed across a normal-sized skeleton, putting more strain on their joints, says Alvarado. So if you want to attack a normal-sized superhero, go for the elbow or shoulder joint, which is already under heavy strain.

Wolverine is the most famous hero who uses a “healing factor” to recover from injuries, but lots of other heroes have this, including Deadpool and the Hulk. And Alvarado says it would be easy to “biohack” this healing factor to turn their immune system against them. Adds Alvarado, “Any modification in their biology to break these pathways would likely lead to an autoimmune response leading to symptoms that can be synonymous with Rheumatoid arthritis, lupus, multiple sclerosis etc. etc. For example, pick any gene related to immunity, design a strategy to “break it” (Virus, Cas9 nucleases, etc.) and give it to Wolverine.” Then stand back and watch, as his healing factor turns against him.

9) Superspeed is vulnerable to friction 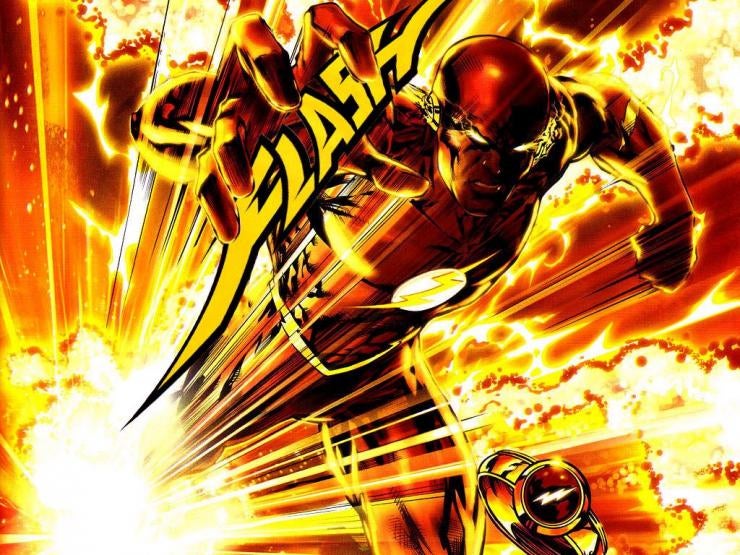 The Flash and other superheroes can run, or move, incredibly fast — and they’re only able to do this because of friction on the ground, explains Jim Kakalios, a physics professor at University of Minnesota and author of The Physics of Superheroes. Some villains, like Captain Cold, use ice or other materials to reduce this friction, so it’s impossible to run fast. But what about going the opposite direction? Says Kakalios, “a larger than normal transfer of static charge from the ground to the Crimson Comet when he ran. (Think about when you exit your car after driving - you get a static shock closing the car door, as the auto’s tires have picked up charge from the road). When the Tornado Titan ran over a high friction surface, he would become a highly charged object moving at high speed. Thus the Viceroy of Velocity would be a very large electrical current, which would in turn generate a very large magnetic field (thanks, Faraday’s Law!). The Sultan of Speed would drag any metallic metal object behind him, and when he stopped running, they would crash into his back, knocking him out.”

When Hancock throws a beached whale back into the ocean, the resulting recoil ought to send Hancock flying into orbit, says Adam Weiner, author of Don’t Try This At Home!: The Physics Of Hollywood Movies. But obviously, when heroes throw huge objects or take huge impacts, their superstrength is compensating for the recoil, so they stay put. All the same, a clever villain ought to be able to figure out a way to use that moment of strain to throw the hero off balance.