We Finally Know What the Zika Virus Actually Looks Like

Here it is, folks—our first glimpse of that abominable virus that’s been wreaking havoc in parts of South America and the Caribbean. This near-atomic scale view of Zika’s external structure could guide scientists as they work to develop effective antiviral treatments and vaccines.

Zika was discovered in Uganda back in 1947, but it wasn’t considered dangerous, hence its longstanding designation as a neglected tropical disease. But things have changed dramatically since last October when the virus began to make the rounds in Brazil and elsewhere. The mosquito-borne virus has now been potentially linked to microcephaly, a condition in which fetal brains grow abnormally small, and Guillain Barre syndrome, which can cause temporary paralysis.

Scientists have been working feverishly over the past several months to learn more about this virus. In the latest breakthrough, a team led by Purdue University researchers have become the first to visualise Zika’s structure, the details of which can now be found in Science. Their new atomic-scale map displays surface features that could be exploited by scientists as they work to create treatments and vaccines.

“This breakthrough illustrates not only the importance of basic research to the betterment of human health, but also its nimbleness in quickly addressing a pressing global concern,” said Purdue President Mitch Daniels in a statement. “This talented team of researchers solved a very difficult puzzle in a remarkably short period of time, and have provided those working on developing vaccines and treatments to stop this virus a map to guide their way.” 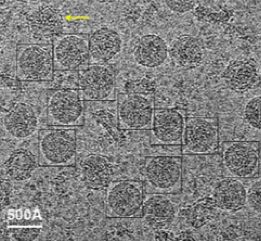 Purdue researchers Richard Kuhn, Michael Rossmann, and colleagues, created their picture of a mature Zika particle using a technique called cryo-electron microscopy. After freezing virus particles, the scientists fired a stream of high-energy electrons through the sample to create tens of thousands of 2D electron micrograph images. This allowed them to create a single, high-resolution, 3D composite view of the Zika virus. Typically, researchers use X-ray crystallography to visualize viruses, but the new technique is faster and more accurate.

The first thing the scientists noticed was how similar it appeared to other flaviviruses—viruses that are transmitted via infected mosquitoes, such as dengue, West Nile, and yellow fever. Zika, like other flaviviruses, features an RNA genome surrounded by a fatty membrane inside an icosahedral protein shell. This is actually good news because it means that ongoing efforts to create vaccines for viruses like dengue and West Nile could be applied to Zika. 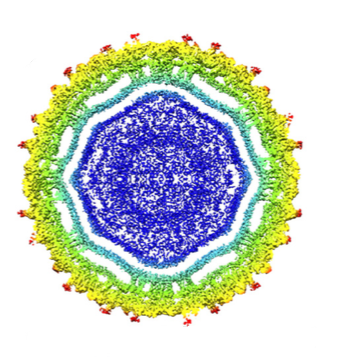 But the Zika particle did feature a rather notable difference in one key surface protein, called E glycoprotein. About 180 of these stubbly objects protrude from the surface of the particle (shown in red), allowing the virus to attach itself to certain human cells, including antibodies and host receptors. These protrusions appear on dengue as well, but the unique characteristics of the Zika E glycoprotein could explain why it’s able to attack nerve cells and critical cells required for normal foetal brain development.

“If this [surface feature] functions as it does in dengue and is involved in attachment to human cells, it could be a good spot to target an antiviral compound,” noted Rossmann. “If this is the case, perhaps an inhibitor could be designed to block this function and keep the virus from attaching to and infecting human cells.”

Alternately, a vaccine could be developed that targets the glycoprotein. Moving forward, the team would like to locate more potential exploits, and to develop therapeutic compounds.