Why Do We Care So Much About What Female Superheroes Wear, Anyway?

By Lauren Davis on at

It's no secret that female characters are portrayed in a different way than their male counterparts are in comic art. But in a medium where superhero costumes are already so silly, why do we care so much about how our lady heroes dress?

Janelle Asselin's piece for Comic Book Resources criticising the cover of DC's Teen Titans #1, in part focusing on the portrayal of Wonder Girl, is an important read in the conversation. Wonder Girl, despite being a teenaged girl, is given breasts that appear to be implants, breasts that are popping out of her strapless top.

What happened after Asselin posted the piece is awful, and much ink has been (rightly) devoted to it: Asselin received not just negative comments, but rape threats and other threats of violence in response to her article.

Asselin has written about her experiences on her blog and on xoJane, and she sparked a larger discussion about how some people talk to women in the comic book industry. That's certainly a discussion that needs to be had, but so does the discussion that Asselin was originally trying to have: that there's a problem with female superheroes' outfits in mainstream comics and that it's turning a lot of folks off to those books.

At io9, we love a good sexy outfit. We celebrate weirdly skimpy costumes and the dated sex appeal of Star Trek duds. We appreciate a good bit of cheesecake and flirty and funny pin-up art. But seeing major superheroines running around with their breasts and buttocks hanging out? It can get exhausting after a while.

We've posted a bit about our issues with female superhero costumes, and each time, we receive comments questioning whether sexualised female costumes are really a problem. This is a response to those comments, explaining why discussing female costumes is important and why many are, in fact, problematic in the current media landscape.

Not All Female Power Fantasies Revolve Around Breasts

One of the responses that I typically see to criticisms of costume choices like Power Girl's boob window is that there are lots of women out there who show a lot of skin in real life, so why can't the fictional Karen Starr? Plus, there are plenty of women who love to cosplay in skimpy outfits, so there must be some appeal. 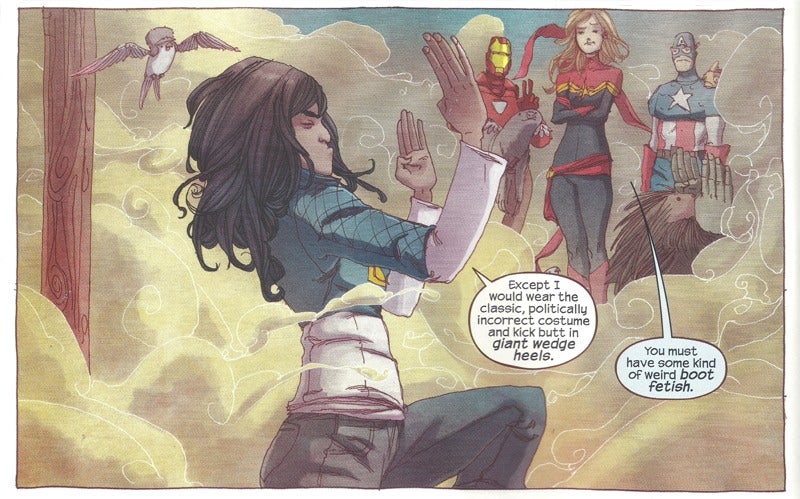 Sometimes, women can even be of two minds about skimpy outfits. I particularly love Kamala Khan's vision of Captain Marvel in the first issue of Ms. Marvel, when she tells Captain Marvel that she wants to be her, "Except I would wear the classic, politically incorrect costume and kick butt in giant wedge heels." When she turns into that version of Ms. Marvel, that costume isn't all it's cracked up to be; the heels are hard to walk in and the outfit delivers "epic wedgies." It's a sequence that perfectly encapsulates why a woman might want to play Slave Leia for a day and then take her regular fashion cues from Michelle Obama. Incidentally, I see a lot more teenagers in my town dressed like the Kamala version of Ms. Marvel—a short dress over tights—than showing off cleavage.

Superhero costumes are powerful, emblematic things. Think about how important it is that Batman's costume look grand and intimidating—and not have ridiculous nipples—or how Superman's shield evokes a sense of goodness and right. When you see Power Girl's leotard or Starfire's barely there whatever-it-is, they don't say "power." They don't say "justice" or "strength" or "competence."

They say, "Here are my breasts."

Sure, there are in-comic justifications for some of these costume choices, logical gymnastics that are supposed to excuse the ridiculous highlighting of breast tissue. Power Girl isn't showing off her cleavage; she's acknowledging the lack of an emblem as powerful as Superman's shield. As for Starfire, she's from a culture that doesn't have any taboos regarding nudity, so why should she wear clothes anyway. (Actually, a naked Starfire would probably look less sexualised than Starfire in the strapping outfit.) But these supposed justifications don't detract from the reality, that the outfits have been specifically designed to look serve-you-up-on-a-platter sexy.

One only needs to look as far as Captain Marvel to see how eager female (and male) readers are for strong characters who don't rely on body-baring costumes. Carol Danvers is a cool lady, the kind of person who bunks in the Statue of Liberty, the kind of person Tony Stark calls when he needs a favour. She's the kind of woman that a lot of women fantasise about being, full-cover costume and all. The Carol Corps that has sprung up around Captain Marvel and the book's writer Kelly Sue DeConnick is a testament to the women who look at Captain Marvel and say, "Finally, a character who speaks to my fantasies."

It's also worth noting that showing skin doesn't automatically sexualise a character, just as a character can be sexy without a plunging neckline and bare legs. Artist Mingjue Helen Chen recently designed streetwear for some of DC's female characters, and the bared midriffs and short shorts make the characters look youthful and casual rather than like sex on a spandex stick:

Women As Heroes, Not As Accessories

The key point that Asselin makes in her post critiquing the Teen Titans cover is that the cover represents poor marketing. When DC puts out a cover that shows a teenaged superhero popping out of her tube top, it delivers a specific message to many women: This book is not for you. The women in this book are here to be gawked at.

The idea that Wonder Girl is running around saving the world in that tube top is ludicrous, and it suggests that she's not a character to be taken seriously. Now you might say, "Of course it's ludicrous! Comics are filled with people dressed like animals and wearing skintight suits in primary colours!" But it's the kind of ridiculousness that matters. Comics writer Gail Simone joked that she was going to give Superman a boob window, a stomach window, and a butt window. Cartoonist Chris Haley of Let's Be Friends Again shared what that might look like: 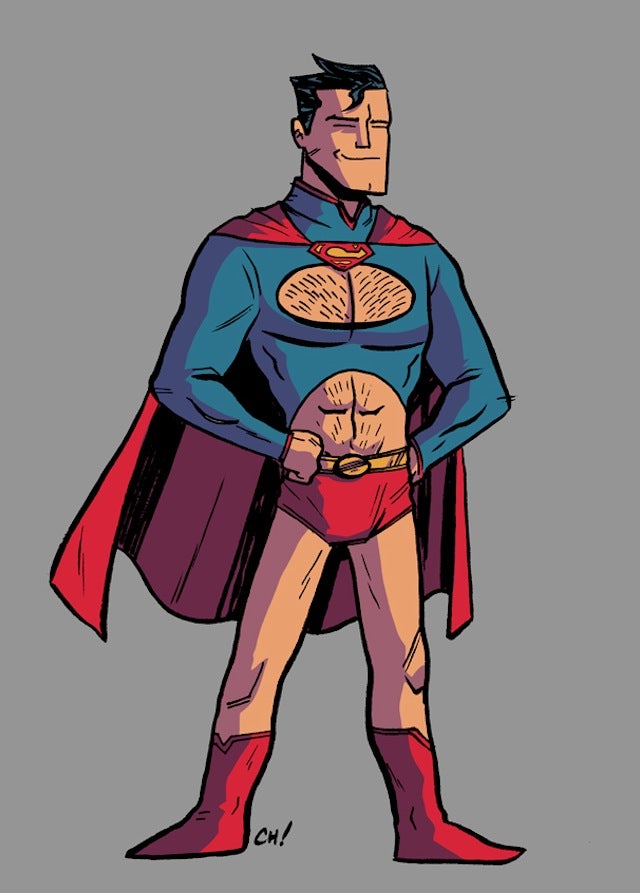 Now is that a Superman that you're going to take seriously? Sure, he could still crush your head without trying, but does he have the same aura of nobility—inspire the sense of same sense of awe—that he does in his usual costume?

Projects like the Hawkeye Initiative and gender-bending cosplayers have done a lot to point out just how silly female characters frequently look in comics. But it bears repeating: when artists place female characters in costumes like the one Wonder Girl is wearing, it makes them look less like heroes and more like dolls to be ogled at. There may be a reason that Wonder Girl is on the team aside from her enormous breasts, but you have to get past that cover in order to read the story.

This focus on breasts and butts also represents a missed opportunity when it comes to conveying character through costume. Putting Zatanna in a magician's assistant outfit is sort of like dressing Barbara Gordon or Kate Kane up as a bat; it's apropos, but by itself, it doesn't say much about the character. Costuming helps show the fun of being Batgirl and the stately elegance of Batwoman. There is so much more that artists can do with women's costumes when they aren't limiting themselves to highlighting those characters' sexual assets.

Think of the Children. No, Really

There is certainly a place for skimpy, sexy costumes in comics. The idea that "No man can defeat her, but I can wank to her" has its own kind of power, and Odin knows that I read plenty of comics that would be inappropriate for children. But superheroes are incredibly attractive to children of any gender, and as superheroes have dominated so much of the media in recent years, it's important to think about the impression that comic book superheroes make on kids.

It's not that kids need to somehow be shielded from images of women's breasts and abs. Rather, it's that these costumes convey a message to children about what powerful women look like. If a girl wants to grow up to be as strong as Wonder Woman, as powerful as Psylocke, as skilled as Elektra, does she have to put her body on display for the pleasure of other people, too? Alex Law's blog Little Girls Are Better At Designing Superheroes Than You shows that plenty of girls are enjoying the fantasies that come with superheroes without the sexualised costume pieces. So can we.