Why Early Wonder Woman Was a Champion of Feminism... And Bondage

By Lauren Davis on at

Looking back, Wonder Woman's earliest adventures are a little...strange. The first Wonder Woman comics were filled with bondage, submission, and domination — and even spanking games with small children. How was this supposed to be feminist?

All images courtesy of Noah Berlatsy at The Hooded Utilitarian. You can see more early Wonder Woman images (and other images from his book) there.

While Jill Lepore's recent book The Secret History of Wonder Woman looks at the biography of William Moulton Marston, the man who invented Wonder Woman, Noah Berlatsky's book, Wonder Woman: Bondage and Feminism in the Marston/Peter Comics, 1941-1948, provides a deep, textual reading of those early issues of Wonder Woman.

If you've never read the comics written by Marston and drawn by Harry G. Peter, Berlatsky's book is particularly eye-opening. It's not just that Wonder Woman gets tied up more than other heroes (although she does) and that she does plenty of tying up herself. Marston was a psychologist by trade, and his particular views on gender, sexuality, domination, and submission (which were all, in his mind, inextricably linked) are on full display in his Wonder Woman run. There are scenes of children learning to be submissive on Paradise Island, stories where Wonder Woman fails because she isn't dominate enough, lurid images of women trapped in cages (and, sometimes, lurid images of Steve Trevor tied up). And there are those weird spanking parties.

On the other hand, there are non-bondage aspects of those early Wonder Woman comics that were lost in later runs. For example, Wonder Woman spent a great deal of time with a group of college women known as the Holliday Girls (led by the tough and stout Etta Candy), who often accompanied Wonder Woman on her adventures.

Berlatsky, who started writing about Wonder Woman over at The Hooded Utilitarian, looks at Marston's own writings as well as feminist theory and the writings of other early 20th-century psychologists to look at those old comics in a fresh light. He examines the way that Marston linked feminism and bondage, why Marston thought the world could use a little more submission, and how he blended titillation with thoughtful stories.

We spoke with Berlatsky about his book and the early Wonder Woman comics:

What made you decide to do this deep reading of the earliest Wonder Woman comics?

I only really discovered them in 2009 or something. Dirk Deppey, who had a late, lamented blog on The Comics Journal, knew about them and posted some picture of Wonder Woman in a gimp mask where she was biting through the mask while thinking about the history of bondage in France and I was like, "Oh my god! What is this?" So then I started reading more of them and blogged about it. I started blogging though every issue. So that's how I started writing about them in-depth.

It's interesting that today we think of Wonder Woman as this feminist figure, but those early comics are actually about female supremacy.

Well, I think that is feminist. There is a tradition of feminist essentialism, essentially, right? Like the Temperance Movement, those people were all feminists. And early suffrage stuff was feminist, too, and based on this idea that women were sort of morally superior, so if they had more power and more authority, that would be good for everybody. So it's a strand of feminism that's not where the feminist movement is at now, for the most part. But it's definitely in there.

The interesting thing about Marston is that that kind of feminist purity, essentialism, is usually associated with being not especially comfortable with sex. Because the essentialism is that women are pure, whereas Marston's like, "Women should rule because they're sexier." Basically. 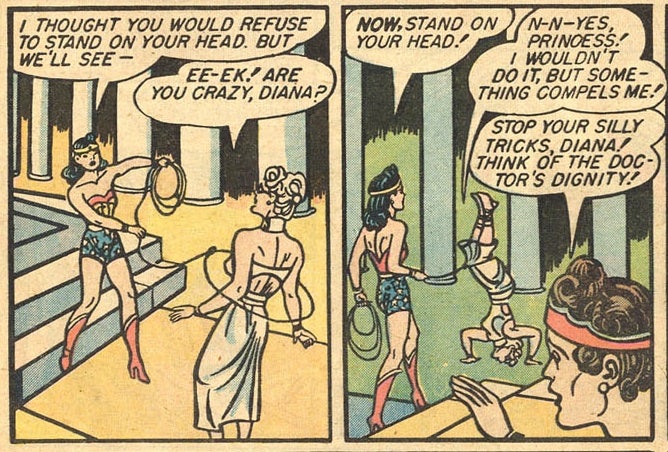 But there are a lot of layers to his comics, because submission and domination are very central to his philosophy...

He thinks they're central to human nature.

So you can think about it a couple ways. On the one hand, they're submissive and that's great, but at the same time, they have to take up the burden of ruling the world, even if they don't really want to. So that's one way to look at it. You can also look at it as bondage play. In the sense of topping from the bottom, but also in the sense that both topping and being on the bottom are fun. The dom twitch, I think, is the technical term - but that it's fun to do both, to get tied up, then to be the one tying up. So you can see it as an extended roleplay. 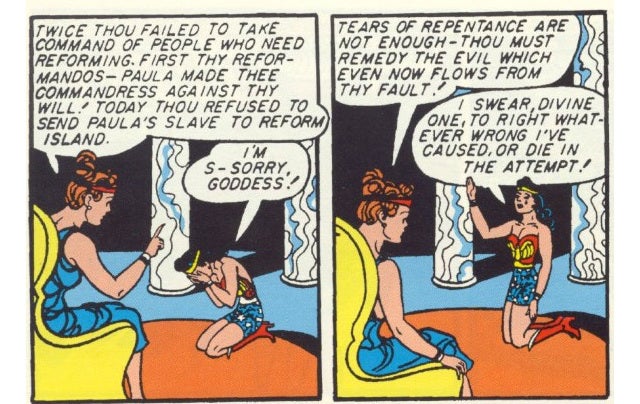 It's interesting, because Marston himself describes Wonder Woman as propaganda.

Yeah, yeah, yeah. It's interesting, because of the way the sort of pro-sex/anti-porn debate often works is that the anti-porn people argue that pornography or sex is going to cause these bad social outcomes. And the pro-sex people are all like, "It's all about individual consent, individual rights." The pro-sex people tend to lean more towards individual arguments, whereas anti-porn tends to be more about social goods.

And so Marston is like, "No! Sex is a social good! It's awesome! It prevents people from killing each other by having sexy women love leaders lead them to love."

But then he has characters like Etta Candy, who is more of a sorority figure than a love leader.

Yeah, Etta's really interesting. Right, she's not Wonder Woman and she doesn't really look the way you expect sexualised women to look. But I think Marston's pretty into her too. She gets to be heroic, probably more often than Steve does. And I think that she gets to be sexual, too. She likes to flirt. She and Wonder Woman flirt. And of course she participates in all these bondage games, which are based on Marston's study of these sorority rituals, which he sort of explicitly says were lesbian or erotic or involved in lesbian eroticism. To me, it's less that "Oh, she's not a love leader." You know, love leaders can look all sorts of ways.

You know, reading about the Holliday Girls made me kind of sad that we don't see that kind of dynamic. I mean, now we see so much of Wonder Woman in the Justice League.

Trina Robbins talks about this; she's a comics creator and she's also someone who has done a lot of history of women's comics stuff and she's a big Wonder Woman fan and read them when she was a kid. And she talks about that a lot. One of the things she loved about the original Wonder Woman comics is that there's a sisterhood. There wasn't just Wonder Woman. There were all these people on Paradise Island; there was her mother; there was Aphrodite. There's the Holliday Girls. There's this whole women's community.

You do see that occasionally in other places, like in Sailor Moon. I think Marston would be really into Sailor Moon. He would be into that. But as far as Wonder Woman herself goes, George Perez had a sort of community of women a little in the '80s; she had a bunch of female friends. But it's definitely something that got lost. And instead you have Wonder Woman as Superman's girlfriend or Wonder Woman in the Justice League. She ends up being this kind of token in Man's World instead of the idea that women are the interesting things, that women are the standard. That's kind of Marston's thing, that women are the standard and then maybe men can be sisters too, if they're lucky.

And that's what's really interesting with Steve Trevor. Especially reading your discussion of the Pluto story ["Secret of the Dark Planet"], it had me thinking about discussions on the Internet about female harassment and a lot of men saying that they don't see it and it's really hard for them to understand that it exists because they don't see it personally. But then Steve Trevor experiences the same thing that the women do in the story, and he's not just an ally; he's a victim of the same circumstances.

And I think that's really important and really thoughtful thing to do, because obviously boys are victims of sexual violence, too.

It's given me renewed appreciation of Steve Trevor as being more than a love interest or an escape.

And he's cool with it! He loves being saved.

Yeah, there's this castration imagery with him, but he's cool with being castrated. He gets to be more like a woman, so he's more heroic.

But also, I think there's something kind of powerful about having this character who is a soldier and who is vulnerable. He's this really brave pilot, but he still gets hurt. Sometimes he needs somebody to come and save him.

It's really forward-thinking in a way, especially for a pulp in the '40s. There weren't images of men wounded during World War II much. There was a propaganda interest in not having those images out there and in not seeing men as vulnerable in war that way. Whereas Marston shows Steve being blown up. He actually shows him being injured in one panel and having his leg broken and there's lots of images of him in the hospital. There's all these images of strong women, but there are also images of men being vulnerable, which I think are also unusual. You know, obviously you'd see guys in the superhero comics in trouble, but then they'd always rescue themselves. But the idea that it's okay to be vulnerable and have somebody take care of you is — I think it's great. It's one of the great things about the comics.

It seems like, from a modern perspective, Marston got away with a lot of stuff.

Yeah, although there was pushback. DC had an editorial board that was supposed to make sure that the comics were okay morally for kids. And there were definitely people who were like, "What is with the bondage? Like is all this stuff about submission really good? Isn't that kind of fascist?" So there was pushback. He got away with it for two reasons. One, they sold really, really well. Comic sales at that time were much, much higher than comic sales today. But even by that standard, it sold, I think 800,000 to a million copies an issue, which, that's a lot. So he had a lot of leverage because they were just selling like hotcakes. But also, he was a psychologist. He was able to claim that what he was doing was academically rigorous because he was an academic. So he had professional and market leverage to push back when people said, "Maybe we should tie her up less."