Why Valiant Comics are a Fantastic Alternative To Marvel And DC

Marvel and DC have a near-monopoly on superhero comics. The two companies even have a joint copyright on the word “superhero”. But if you’re tired of the endless reboots, crossovers and revamps, then there’s an alternative. Valiant Comics has been kicking all kinds of ass lately.

Befitting their nature as the giants of superhero comics, Marvel and DC put out tonnes of comics: they regularly have 40 to 60 ongoing series each, coming out on a monthly basis. Valiant, on the other hand, averages around 20 ongoings at one time. This isn’t a problem; instead, it’s a fantastic asset, that keeps Valiant fresh. 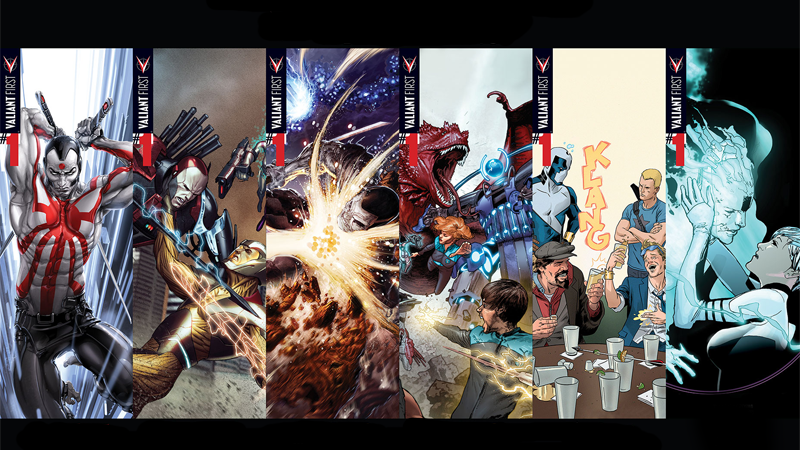 In 2012, Valiant relaunched itself after nearly a decade’s hiatus. Previously, it had been owned by the video game company Acclaim, and when Acclaim went bankrupt in 2004, Valiant went dormant. The brand new relaunched Valiant was aimed at keeping things tight and putting out just a handful of excellent series.

In fact, Valiant relaunched with just four series and a blank slate of continuity, then slowly built up its universe piece by piece, introducing characters from Valiant’s history one by one. This means that Valiant’s universe is far less intimidating for newcomers, in comparison to the vast worlds of DC and Marvel, and the backstory is much less convoluted.

There’s a reason that both Marvel and DC are continuously shaking up their legacy heroes and doing continuity reboots: they have a lot of baggage, and a lot of complex worldbuilding to keep track of. Valiant, meanwhile, currently has a sweet spot: its characters have cool histories that make them interesting to read and explore, but you equally don’t have to go reading thousand-word Wikipedia entries, before you pick up a single book.

... But There’s Still So Much More it Can Do 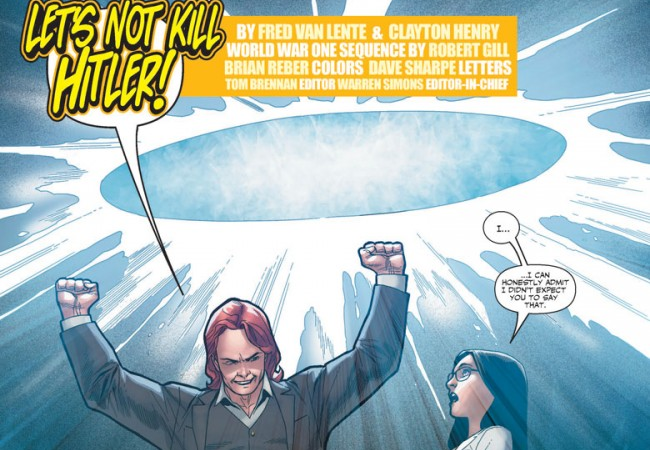 That small size also means that Valiant feels like it’s bursting with potential. When you pick up one of their comics, you get the feeling that you never really know where a Valiant series will go next.

With heroes like Batman or Spider-Man, you can always assume a certain number of things about their status quo — things may get shaken up, but at the end of the day, Bruce Wayne will always go back to being Batman. Because the whole world knows that Bruce Wayne is Batman. But with less famous characters, Valiant can take huge chances, without the reader knowing that it’ll be back to normal in a year’s time. For example, Valiant can take a hero like the nanotech-infused supersoldier Bloodshot, and suddenly throw him into a post-apocalyptic future for a story arc. The conceit of the globe-trotting adventures of the comedic duo Archer & Armstrong, or the time-travel of Ivar, Time Walker mean you can have comics that are always changing and going to new places for new stories.

But Valiant is also home to some really great characters. You can draw comparisons to heroes from Marvel and DC from some of Valiant’s own roster: Master assassin and smartest man in the room, Ninjak, has parallels with Batman. Valiant’s banner character, X-O Manowar, is a time-displaced Visigoth covered in futuristic alien gear, and has similar morals and feelings of isolation to Captain America. The Harbinger series has many thematic parallels with the plight of mutants in X-Men. But there’s enough twists on those familiar formulas that the comparison only frequently runs skin-deep. You never feel like you’re reading Marvel or DC-lite. 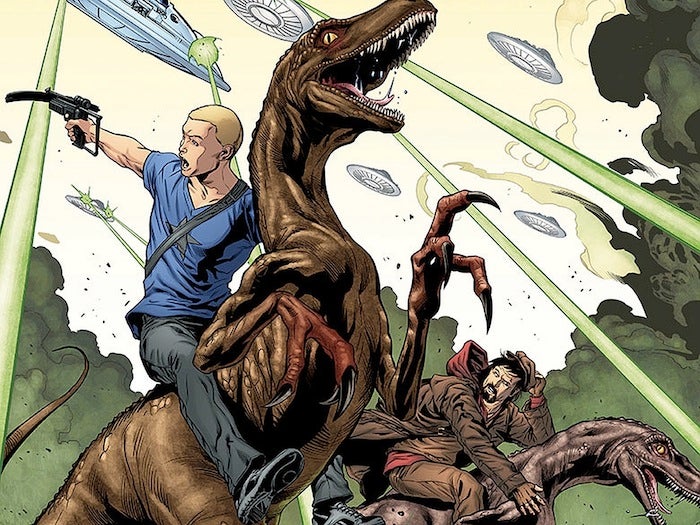 And part of what makes Valiant stand out so much is that some of its best characters aren’t actually superheroes, the way we’re used to thinking of them.Archer & Armstrong, a buddy cop adventure series about a young assassin and the alcoholic, immortal superbeing he was destined to murder before becoming his best friend, is consistently one of the most funniest comics out there. Quantum and Woody skews a little edgier in its humour, but is still a rollocking adventure about two genetically enhanced brothers (and their genetically-modified supergoat).

What’s most surprising about Valiant for a first-time reader, however, is the diversity of stories on display. There are superhero teams and buddy comedies. But there are also supernatural adventures, like The Death-Defying Doctor Mirage (about a woman who can talk to the dead, seeking contact with her husband beyond the grave). Or the sci-fi time-travel storytelling of the aforementioned Ivar, Timewalker (it’s basically Doctor Who transformed into a comic book.) Or even heroes like Faith, a plus-sized woman who happens to be a fangirl of all things superhero and science fiction, while also living the life of an actual superhero. There’s really something for everyone.

It Doesn’t Try To Go Up Against Marvel And DC

But one of the best things about Valiant is that it never feels like a scrappy sibling trying to pitch a fight with Marvel and D C— in the way that the big two sometimes snipe at each other. Even as Valiant takes bigger chances, the comics creators also don’t act as though they have to prove themselves against the industry’s two biggest publishers. 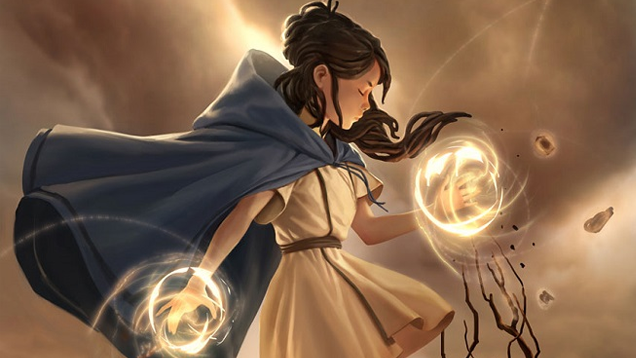 This leads to some weird, and uniquely fun things. For example, this year’sBook of Death event for Valiant was sandwiched between the cataclysmic retrospective summer blockbusters of DC’s Convergence and Marvel’s Secret Wars. While Marvel and DC were looking back at their own complex histories, Valiant’s event instead flung itself into the company’s future, imagining the final ends of its biggest heroes and watching their current incarnations wrestle with that knowledge. It also helps that Valiant’s creative teams are drawn from both independent comic circles and the rosters of DC and Marvel: creators like Jeff Lemire, Paolo Rivera, Matt Kindt, and many more, are responsible for some of the best comics from any company, and as regulars at Valiant they bring that same quality to a whole new universe.

Valiant is a great place for new readers to start delving into superhero and adventure comics — but it’s not just a stepping stone, before you move on to the Big Two. Valiant has a rich enough universe that you can get lost in it as much as you can with the sprawling worlds of Marvel and DC.

It Could Be The Next Big Thing In Comic Book Movies 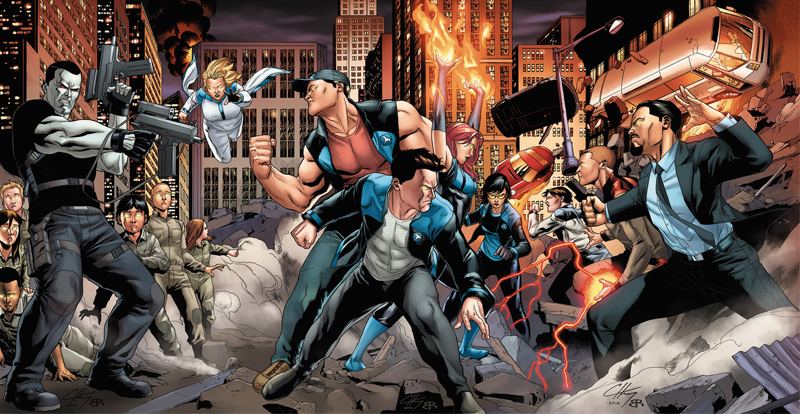 If all goes well, Valiant could soon be a lot bigger than it currently than it currently is — earlier this year, the company announced a partnership with Sony for a five-movie deal to bring Harbinger and Bloodshot to the big screen, followed by a film that unites the two series. In a world where Marvel and DC have helped create a superhero boom in the movie industry, Valiant is about to be exposed to a lot more people already hungry for superhero entertainment.

Let’s admit it: who doesn’t occasionally feel like they want to be in on the ground level of something before it explodes in popularity? Before they break out on the big screen, now is a great time to get yourself familiar with Valiant’s heroes.

So what’s the best way to get into Valiant? My advice would be the same as for any budding comics-reader: just grab a series you think sounds cool, and dive in. Valiant has put out some starter-anthologies of their series that retail at relatively low prices, making it easy to hop into something you like the sound of. Here are a few suggestions!

X-O Manowar is often considered Valiant’s premier book, about a time-displaced Visigoth warrior who finds himself in the far future of 2012, kitted out in alien armour.

For tales of superhuman persecution, you’ll want to try Harbinger, about young psionic men and women who discover that their powers could change the world, and are on the run because of it.

If you want wacky, zany heroics that aren’t quite so self-serious however, you’ll want to check out the highlight of Valiant’s comedy books: Archer & Armstrong, one of the most frequently insane comic books on shelves.

But there’s much more out there to see. If you’re feeling a bit tired of Marvel and DC at the moment, Valiant is a refreshing alternative.